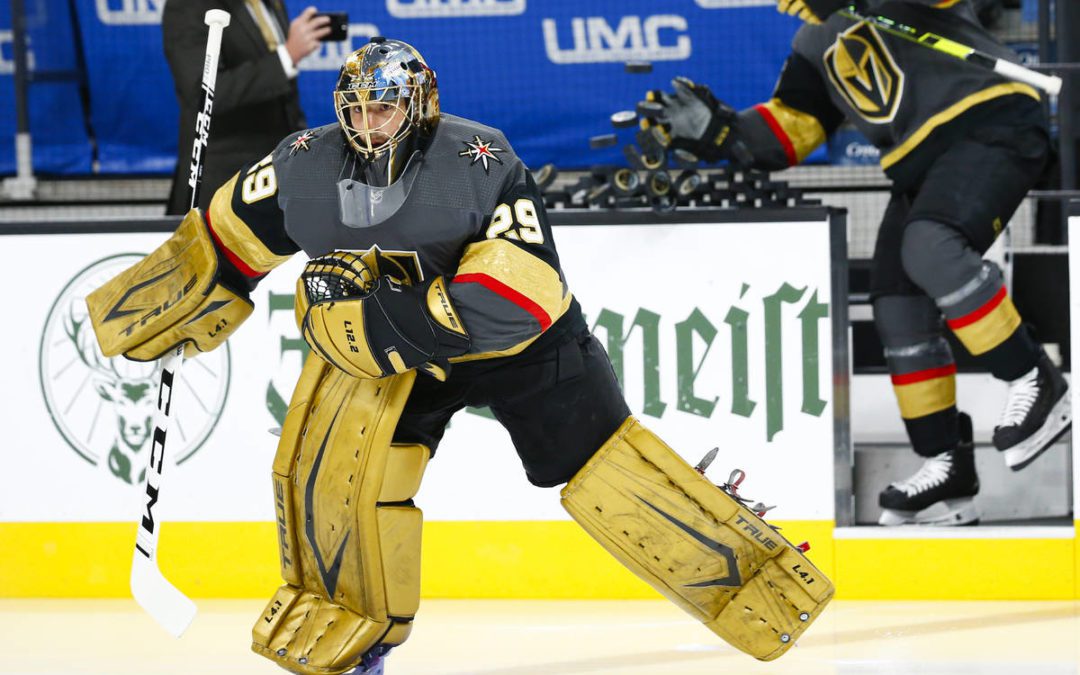 Golden Knights goaltender Marc-Andre Fleury warms up before the start of Game 5 of a first-round NHL hockey playoff series against Minnesota Wild at T-Mobile Arena in Las Vegas on Monday, May 24, 2021. (Chase Stevens/Las Vegas Review-Journal) @csstevensphoto

DENVER — The Golden Knights’ Vezina Trophy finalist is going back in the net.

Marc-Andre Fleury will start Game 2 of the Knights’ second-round series against the Colorado Avalanche on Wednesday at Ball Arena. Robin Lehner started Game 1 and lost 7-1.

Lehner did not practice Tuesday or participate in the team’s optional morning skate Wednesday.

Fleury was named a Vezina Trophy finalist for the first time Tuesday after an impressive regular season. He finished 26-10 and set career bests in save percentage (.928) and goals-against average (1.98). Both marks ranked fourth in the NHL among goaltenders with at least 10 starts. He was third in wins and shutouts (six).

Fleury also climbed to third on the all-time wins list with 492. Only Martin Brodeur (691) and Patrick Roy (551) are ahead of him.

The other Vezina finalists are Tampa Bay’s Andrei Vasilevskiy and Colorado’s Philipp Grubauer.

“He’s a class act,” Knights coach Pete DeBoer said of Fleury. “He shows up every day with a smile on his face, the most energy in the room despite the fact that he’s the oldest guy in the room. He stays on late at practice. Has a lot of fun and enjoys coming to the rink. Enjoys the dressing room banter with guys. More importantly, just how he treats people and not just his teammates. The trainers, the fans he comes across. It’s genuine because you never see him any different.”

Fleury will need to be good against the Avalanche, who were the NHL’s highest-scoring team in the regular season and lead the playoffs in goals per game.

Fleury had success against Colorado in the regular season. He was 4-3 with a 2.14 goals-against average and .932 save percentage. He was the only goaltender to shut them out, and he did it twice.

He’s hoping watching Colorado from the bench in Game 1 will help him the rest of the series.

“I think we know who the big guys are, how quick of a team they are, the way they like to make plays in the offensive zone,” Fleury said. “When you play, you’re always looking for the puck, right? So when you’re on the bench, you can maybe look at the game as a whole and see where guys are at. It’s good to have both perspectives.”