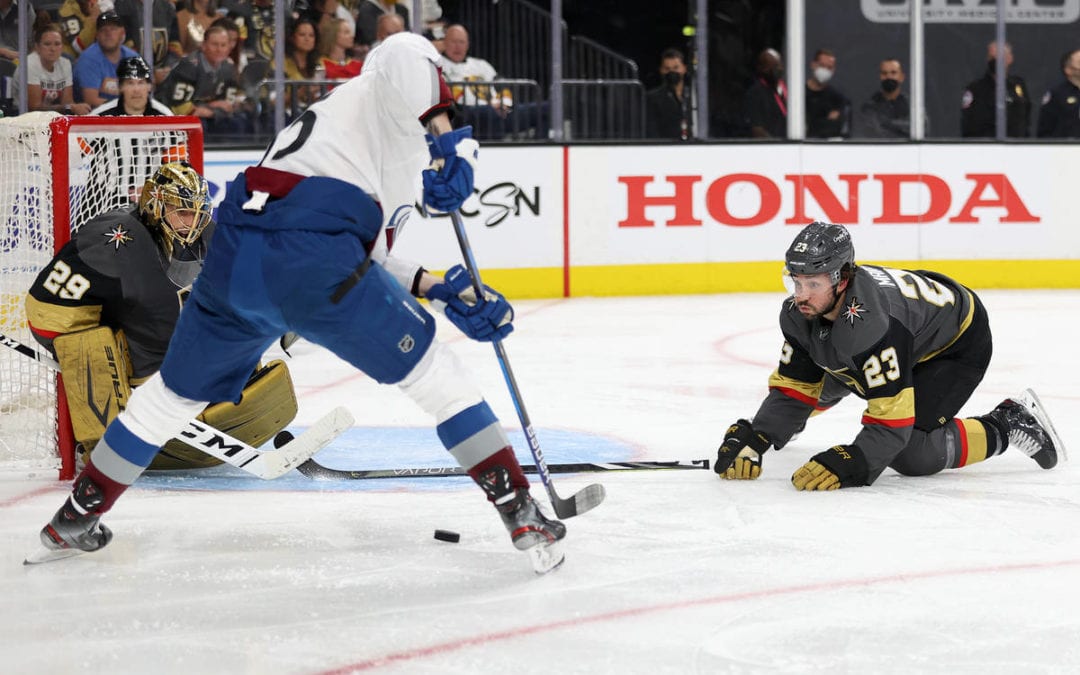 If there is one lingering criticism of the Golden Knights in their brief but successful postseason history, it’s their inability to close out a series.

That lack of a knockout punch nearly proved costly last season in the bubble and again during the first round against Minnesota, which pushed the series to seven games.

The Knights can’t afford to swing and miss Thursday when they look to close out the Colorado Avalanche in Game 6 of the West Division final at T-Mobile Arena.

“We know the task at hand and how difficult it’s going to be,” coach Pete DeBoer said. “I think Mark Stone said it (Tuesday) night, we all know the last one’s always the toughest. Especially against a team like this. Excited about the home crowd. We’re going to need that extra boost of energy.”

After falling behind 2-0 in the series and in Game 5, the Knights are in position to eliminate the Presidents’ Trophy winner following Stone’s goal 50 seconds into overtime Tuesday in Denver.

However, potential series-clinching games have not been the Knights’ strength since their inaugural season when they wasted no time sending Los Angeles, San Jose and Winnipeg to the golf course.

The Knights are 3-8 in their past 11 closeout games, including a 6-2 victory over Minnesota in Game 7 on May 28. They were unable to hold a 3-1 series lead against San Jose in 2019 and nearly squandered a 3-1 advantage against Vancouver in the Western Conference semifinal last season before winning Game 7.

Goalie Marc-Andre Fleury had five straight losses with a chance to clinch a series before he shut down the Wild in the deciding game.

“I’m a huge believer in leadership in your room and experience, having been there before,” DeBoer said. “We’re very fortunate to have obviously Mark Stone and everything he brings, but the two guys that I think also bring a ton to the table there are Alex Pietrangelo and Alec Martinez.

“Both Stanley Cup winners. Both have been there and seen almost every situation in the playoffs and have a real good feel for what to say at the right time and messaging in those moments. We’re real fortunate to have those guys in the room.”

Should the Knights advance to the final four of the postseason for the third time in four seasons, North Division champion Montreal is waiting in the Stanley Cup semifinals.

To get there, they’ll have to continue standing up the Avalanche at the blue line and forcing Colorado into turnovers with pressure on the forecheck.

But the Knights were able to withstand the push and steal home-ice advantage as Fleury came up with several key stops, including a game-saver on J.T. Compher early in overtime.

“We’ve got to go out and earn it, and that’s the mentality I want our guys to have. And I believe we can get it done,” Bednar said. “I’ve seen our guys step up in big moments now for four years, and none bigger than this one here (Thursday) night.”

The Knights have the last change at home and probably will match the Stone-Chandler Stephenson-Max Pacioretty line against center Nathan MacKinnon and his wingers, which worked well in Games 3 and 4.

MacKinnon doesn’t have a point in the past three outings and has gone four straight without a goal.

Colorado hasn’t lost four straight games all season, but this might be the Knights’ best chance to clinch the series.

Game 7 would be Saturday at Ball Arena in Denver, where the Avalanche won 13 straight and were 20-0-1 including the regular season before Tuesday’s loss.

“I think Colorado has found another level here, and that’s not going away,” DeBoer said. “They’re going to be at the same level (Thursday). This isn’t going to look like Game 3 or 4. It’s going to look more like (Tuesday) night, and we’re going to have to find a way.”

Who: Avalanche at Golden Knights