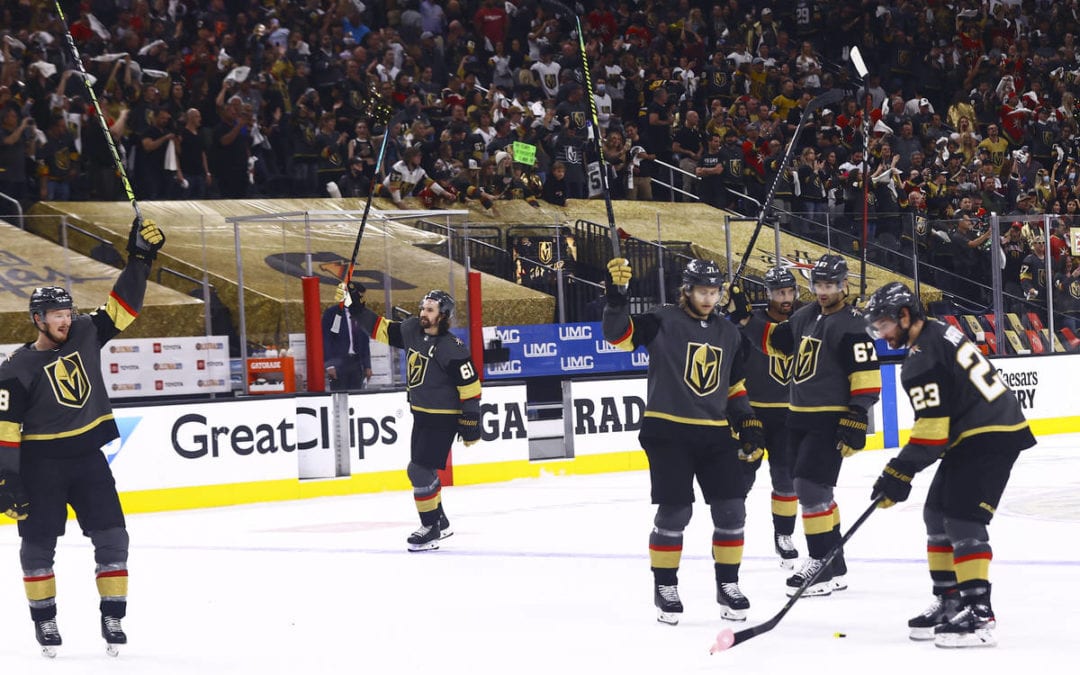 The Knights didn’t just win twice at T-Mobile Arena. They showed they can outplay one of the NHL’s top teams — and this season’s Presidents’ Trophy winners — when they stick to their game plan.

Now, the Knights must prove they can do the same thing at Ball Arena, where the Avalanche are 20-0-1 in their past 21 games. But the Knights think they can win anywhere with the way they’re playing.

“Colorado, Vegas, wherever you put this next game, for me it doesn’t matter,” coach Pete DeBoer said. “We want to keep building our game, keep working on the formula that’s working. Show up, and they’re obviously going to have something to say about it. Great team. Really tough at home. Our guys aren’t a group that’s easily intimidated.”

The Knights’ blueprint for success hasn’t exactly been rocket science.

It has been simple, smart hockey that has frustrated an Avalanche team that got accustomed to running opponents out of the building with their speed and skill.

The Knights have done an excellent job slowing Colorado around both blue lines. They’re cutting off passing lanes at the offensive end and preventing the Avalanche from getting a lot of clean breakouts. It has led to a lot of turnovers that have kept Colorado pinned back.

The Knights also have been aggressive in the neutral zone and at the defensive blue line to keep the Avalanche from carrying the puck into the offensive zone. It has limited Colorado’s transition opportunities, which has led to forced plays and ill-advised passes from a club used to skating circles around teams.

Even when the Avalanche have dumped the puck in from the neutral zone, the Knights’ breakouts have been fast and sharp to send play back the other way.

“I think we gave them a little bit too much respect (early in the series),” captain Mark Stone said. “Obviously in Game 1, we kind of sat back. Just kind of dipped our toe. I think after the first period in Game 2, we realized we can play with these guys.”

The Knights also are playing simple hockey on offense.

They’re content not to force plays through the neutral zone and rely on their forecheck to recover pucks. They’ve given the Avalanche’s skilled but smaller blue line fits in the corners and behind the net. It has helped the Knights keep the puck trapped in the offensive end and get fresh skaters on the ice.

“I think we’re kind of smart with the puck,” center William Karlsson said of his line, which has a combined 14 points in the series. “When there’s plays through the neutral zone, we take it, but if not, we chip it in, go to work. It’s working.”

The Knights’ play at all areas of the ice is leading to lopsided results.

They have outshot the Avalanche 119-63 in the past three games and out-attempted them 217-159. What makes those numbers even more impressive is that Colorado was second in the NHL in shots per game (34.6) in the regular season and first in shots allowed (25.4). The Avalanche also had a 57.83 percent shot-attempts share before the playoffs, according to the website NaturalStatTrick.

The Knights’ game plan and execution have put the onus on Colorado to adjust by simplifying its game or risk being eliminated in the second round for the third consecutive season.

“We’re confident in our game,” DeBoer said. “We’re confident on the road. Not an easy task obviously going in there with their record, what they’ve done at home. Our guys are excited about the challenge.”

Who: Golden Knights at Avalanche