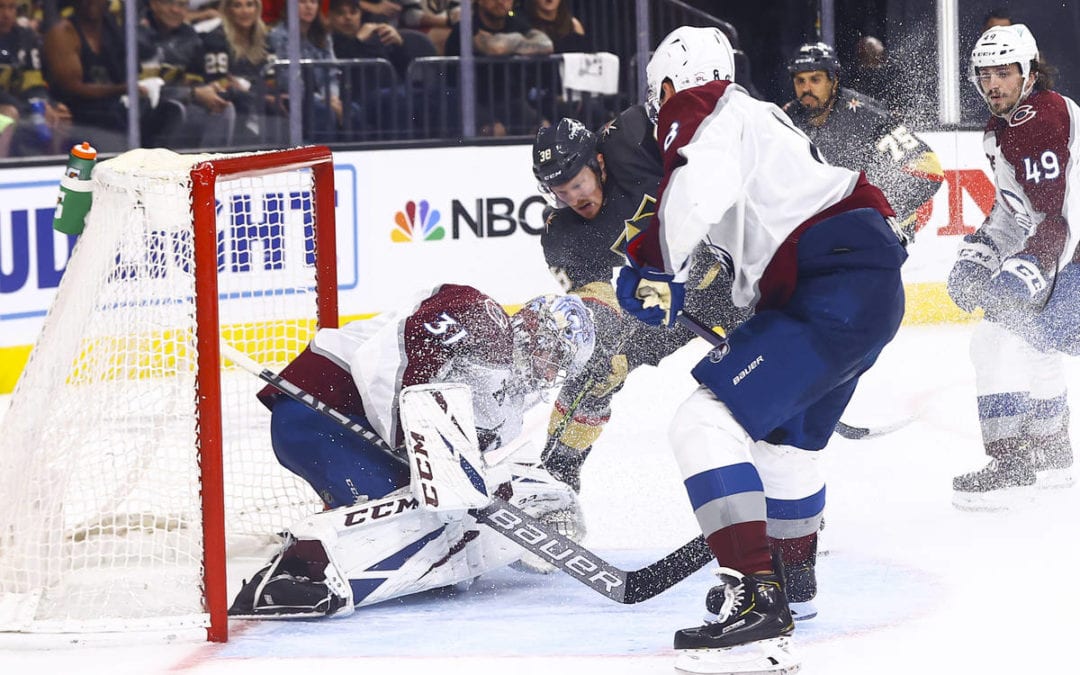 It’s almost too soft a definition for what the Golden Knights are doing to Colorado.

It has become a best-of-three now, this West Division final series that the Knights tied at two games apiece with a 5-1 victory Sunday night before 18,081 at T-Mobile Arena.

The only Avalanche being seen right now is a mass of Knights rapidly forechecking Colorado in its own end.

Look. It’s one thing for a team trailing 2-0 in a series to fly around and push the action and be overly aggressive for small stretches. Desperation is an enticing motivational tool.

But the Knights are squarely back in this thing because they have brought the weight of stress to Colorado for the past eight periods. They locked up the neutral zone in Games 3 and 4 like Deion Sanders did wideouts (way) back in the day.

“We want to attack in waves, and I think the strength in our group is the depth of four lines,” Knights coach Pete DeBoer said. “You can’t play that game unless you have four lines of guys that hop over the boards and are willing to do the work.”

So, yeah. This is staggeringly good: Colorado over the regular season and playoffs averaged nearly 35 shots per game.

What it has managed lately …

Put it this way: If the Raiders pressured opponents as the Knights have Colorado in the past three games, Jon Gruden’s team would win a lot more games.

I’d also like to see Jonathan Marchessault at cornerback, but that’s for another column.

Everything begins for Colorado with its top line. There is arguably none better across the NHL than Nathan MacKinnon teaming with Gabriel Landeskog and Mikko Rantanen. But the Knights didn’t just limit them the past two games. They vanished the three.

In two games at T-Mobile, the MacKinnon line combined to play at a minus-9 with one goal and one assist (each on the same power play).

“That’s what it takes to win,” Knights captain Mark Stone said. “We have to continue to put pressure. We’re trying to make them come 200 feet to get a scoring chance. We didn’t do a great job of that in Game 1 (a 7-1 loss). We were a little sloppy and let them free-wheel.

Alex Pietrangelo was near that Sunday, at least to a point the defenseman offered one of his better games for the Knights since signing that seven-year, $61.6 million contract in October.

A huge reason for such constant pressure came via a steady transition game led by Pietrangelo and others breaking things out time and again. The waves that DeBoer talked about were of the pipeline variety. It also took supreme focus.

No shifts off. No cheating for offense. No swaying from the structure.

Must win on road

The Knights won’t win this series and advance to a semifinal round without getting a victory in Denver, be it Tuesday in Game 5 or possibly Saturday in Game 7. This is the truth that home-ice advantage affords the Avalanche.

But while the biggest question might be where Colorado’s mindset is — from being six minutes from a 3-0 series lead to being tied 2-2 — the Knights have discovered their greatest edge.

Simply, outworking the other guys.

For two games at T-Mobile, it wasn’t close.

Colorado was buried under a mountain of relentless pressure.

By a different kind of Avalanche.