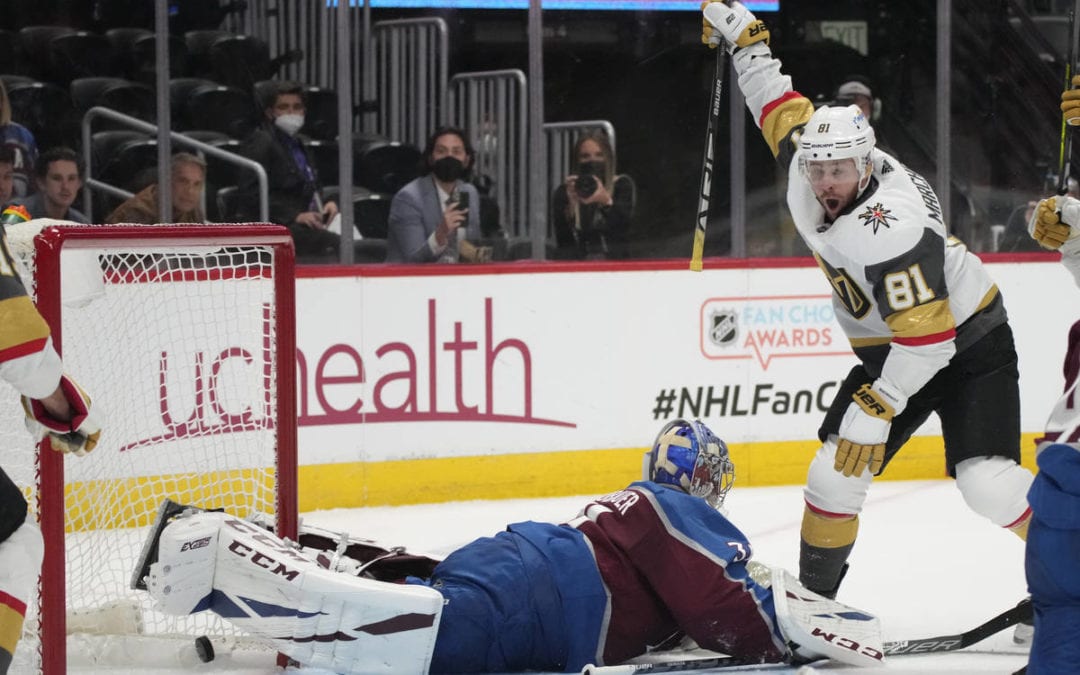 3. Knights left wing Jonathan Marchessault — His sixth goal of the playoffs was a crucial one, as he tied the game 2-2 early in the third period. He has four goals in his last two games.

2. Knights right wing Alex Tuch — He gave the Knights life after they were swamped for much of the second period. He scored 1:03 into the third to get his team back into the game.

1. Knights captain Mark Stone — His overtime winner gave the Knights their only lead. It came on his first shot on goal. The play showcased how much of a two-way player he is, as he blocked a shot before skating out of the defensive zone.

The Knights trailed 2-0 entering the third period after getting handily outplayed in the second.

Tuch’s line shifted the complexion of the game in a hurry. Left wing Mattias Janmark blocked a pass out of the zone by Avalanche left wing Andre Burakovsky, and center Nicolas Roy fought to keep the puck in the offensive zone.

Roy threw the puck toward Tuch cutting toward the net, and the power forward deflected it to himself before batting it out of the air past Avalanche goaltender Philipp Grubauer 1:03 into the period.

They were 0-4 in their last four overtime games before Stone’s winner. His goal, 50 seconds into the extra session, was the fastest goal to start an overtime by a Knights player.

“He blocked a shot in our end of the ice first and then got the breakaway and stuck it in the net. … If there’s one sequence of plays that kind of defines him, that would be it.” — Knights coach Pete DeBoer, on Stone.

“We don’t have much time to do anything but forget about this one and move on. We have to go into Vegas and win a hockey game. Simple as that.” — Avalanche captain Gabriel Landeskog.