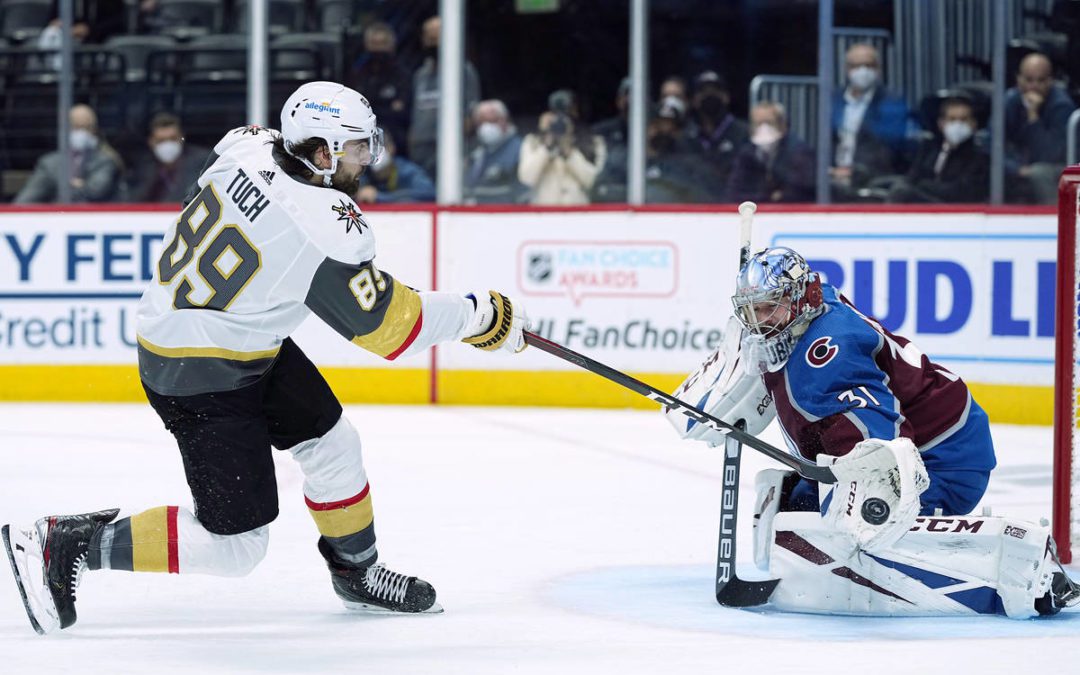 The Golden Knights are in unfamiliar territory, trailing 2-0 in a playoff series for the first time in their brief history.

To advance from the West Division final, they must win four of the next five over Colorado starting with Friday’s Game 3 at T-Mobile Arena.

But the Knights found weaknesses in the Avalanche during Game 2 despite losing in overtime and showed how to have success against the Presidents’ Trophy winner.

“We feel good about our game,” coach Pete DeBoer said. “I think after Game 1, we were out to prove that we can play with this team, and I think we did that. We’ve got to come out in Game 3 and do the same thing. One game at a time. This series is a long way from over.”

Here are five things the Knights need to do to get back in the best-of-seven series:

Seven of the nine minors called in Game 2 were for those two infractions, and regardless of how “soft” the slashing call was against Reilly Smith in overtime, the Knights didn’t adjust well on the fly. Avalanche defenseman Patrik Nemeth was penalized for a similar slashing play off a faceoff in the second period.

Colorado’s top-ranked power play had six opportunities in Game 2 and is 4-for-11 in the series. Even when it doesn’t score, the Avalanche’s top unit is shredding the Knights’ penalty killers with tic-tac-toe passing.

The Knights need to keep the action at five-on-five, where they had 62 percent of the shot attempts (60-37) in Game 2, according to NaturalStatTrick.com.

Brandon Saad’s goal to open the scoring for the Avalanche in Game 2 was an example of what not to do.

The Knights were set up in their 1-2-2 forecheck, but left a gaping lane through the middle of the ice, and defenseman Samuel Girard fired an outlet pass from his own zone to Saad on the other side of the red line that started the rush.

In the second and third periods, the Knights did a better job of denying those transition opportunities and not letting the Avalanche hit the afterburners like in Game 1. Smith’s tying goal came after defenseman Shea Theodore forced a turnover near the red line.

“You can’t let them build speed in the neutral zone or they’re going to burn you,” right wing Mark Stone said.

Early in the second period, the Knights had the puck for 1:20 without leaving the offensive zone. They worked low to high, generated a handful of good scoring chances and wore down Colorado’s defense along the wall.

The game plan couldn’t have been executed better.

The Knights’ pressure on the forecheck forced the Avalanche into several turnovers during Game 2, and they were able to establish the heavy style that worked well in four victories over Colorado during the regular season.

Most of all, they forced Colorado to play without the puck rather than breaking out effortlessly and starting the rush.

The Avalanche’s fourth line is missing two key cogs, and center Pierre-Edouard Bellemare was left to skate with rookies Alex Newhook and Sampo Ranta in the first two games.

Newhook took a penalty in the first period of Game 2 and played 6:08, and Ranta logged 5:56. Neither generated a shot attempt Wednesday, and coach Jared Bednar could look to make a lineup switch for Game 3.

The Knights produced 71.4 percent of the shot attempts at five-on-five in Game 2 when Colorado’s fourth line was on the ice and had the edge in scoring chances (3-1) and high-danger chances (1-0).

Despite the lopsided puck possession, the Knights have yet to score against Bellemare’s line.

Colorado goalie Philipp Grubauer is proving to be worthy of his selection as a Vezina Trophy finalist by stopping 63 of 66 shots in the series.

But the Knights officially hit the post three times during the third period of Game 2 and couldn’t take the lead even though they had 69 percent of the expected goals in the final two periods.

The top line needs to produce for the Knights to climb back into the series. Stone doesn’t have a point, and neither does center Chandler Stephenson. Max Pacioretty has two assists, one of which came during a line change.

What: Avalanche at Golden Knights