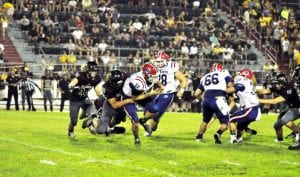 Navarre’s Grady Kelly is heading home in a sense by committing to Colorado State to continue his football career.

Kelly spent the early years of his life in Fort Collins before moving to Florida. He also has ties to the school itself as several family members graduated from CSU, including his dad.

Though the rising senior defensive lineman never had a chance to make an official visit because of the COVID-19 pandemic, he knows his decision is the right one. He made his announcement on Twitter Tuesday afternoon.

“I’m beyond excited,” Kelly said. “I’m going to be playing Division I football in the Mountain West, and I’m hoping to go out there and tear it up.”

Kelly said during an interview Tuesday that he hadn’t had a chance to talk with Wright yet, but planned to do so later in the day. He is looking forward to being on the same team as Wright.

“It’s great knowing someone there and he’ll be able to talk to me about the program and what to expect,” Kelly said.

Wright’s success last year also serves as motivation for Kelly that he can step in and have an immediate impact. As a junior, the Navarre standout was among the nation’s best in sacks, recording 18, a single-season school record. He rolled up more than 60 tackles as well.

“It does motivate me,” Kelly said. “We see good competition here in Florida. It’s the most competitive ball in the country. Seeing what Dante did puts me in the mindset that I can go out and make an impact.”

Kelly said committing to CSU takes a weight off his shoulder. He can now go into his senior season and just perform.

And while the pandemic has eliminated spring football and has left summer workouts as a team in jeopardy, he hasn’t taken his foot off the gas pedal.

“I’m still putting in my workouts every week and studying film. I want to be as ready as I can be so that we can have a great season as a team,” Kelly said.