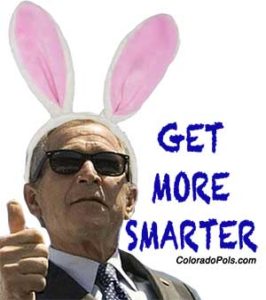 Happy Singmogil. Please celebrate responsibly. Let’s Get More Smarter; if you think we missed something important, please include the link in the comments below (here’s a good example). If you are more of an audio learner, check out . And don’t forget to find us on Facebook and Twitter.

► Health experts continue to warn that we could be nearing another surge in the COVID-19 pandemic. As CNN explains:

The highly contagious B.1.1.7 variant has fueled an alarming rise in Covid-19 cases and hospitalizations in parts of Europe. And experts worry the US could be next if Americans don’t double down on safety measures until more people are vaccinated.

What’s worse, experts say, is that the variant is changing the pandemic’s playbook and could spell trouble for younger groups that haven’t yet been vaccinated.

As reports, an increase in infections is particularly worrisome in India:

India on Sunday reported more than 100,000 new cases of the coronavirus, a grim measure achieved by only the United States and briefly Brazil, and a sign that the infections in the nation of 1.3 billion could be spinning out of control.

India, which has one of the world’s largest vaccine-manufacturing capacities, is immunizing citizens at a rate of 2 million a day but has not made significant headway, with just 5 percent of the population having received a first dose. India is also slowing down its vaccine exports in the face of domestic demand, with potentially dire consequences for other countries.

Experts believe that changes in behavior, waning immunity from prior infections and the spread of new variants are all contributing to the dramatic rise in cases.

Here in Colorado, Gov. Jared Polis extended a statewide mask order for another month at the request of local health officials.

On the subject of COVID-19 vaccinations, we still don’t know if Republican members of Colorado’s Congressional delegation have received their vaccines.

► reports on an influx of federal money coming to Colorado:

Over the next 13 months, nearly $2 billion will move from the federal treasury to the bank accounts of Colorado’s counties, cities and towns — a redistribution of tax dollars that experts and officials say is without parallel in modern American history.

“The sheer amount of money that is flowing is unprecedented,” said John Swartout, the executive director of Colorado Counties Inc., a membership association for city and county officials. “There’s been nothing like it.”

For Colorado’s local governments, the money represents an opportunity they have never had and may not get again soon. It’s a chance to fill holes in budgets and bridges, to address decades-long addictions and afflictions, to build up and better their towns.

The money comes from the American Rescue Plan Act, the $1.9 trillion stimulus and COVID-19 relief package that passed Congress last month without a single Republican vote and was signed into law by President Joe Biden.

► Let’s get some updates on the State Legislature, which will begin to tackle “The Long Bill” (the state budget) this week…

Lawmakers are looking for ways to expand access to birth control via Medicaid.

Police accountability will be a hot topic in the next few weeks.

As Colorado Public Radio reports, some gun owners want lawmakers to know that they oppose an Assault Weapons Ban that doesn’t exist.

reports on legislative efforts to address a shortage of child care options in Colorado.

reports on a proposal to pay school board members for their time.

Here’s more from on the plastic bag ban discussion.

► Quentin Young of catches up on the story of , who was elected chair of the Colorado Independent Congressional Redistricting Committee:

“The election of 2020 will go down as the most questioned election in our country’s history,” wrote Danny Moore, the new chair of the new Colorado Independent Congressional Redistricting Commission, on Facebook. That’s just one example of this conspiracy theorist’s habit of spreading misinformation about the election, COVID-19 and other topics.

In other words, one of the state officials in charge of ensuring fairness in future elections believes the lie that the last election wasn’t fair.

Does he belong on the commission? Of course not.

Can he be removed? Probably not, unless he resigns, which he should.

► Victoria Carodine of magazine examines how Colorado lawmakers are attempting to strengthen gun safety laws in the aftermath of the Boulder King Soopers shootings.

► Major League Baseball is protesting Georgia’s new voting restrictions by pulling the 2021 All-Star Game from Atlanta. We’ll take it here, since it would give Coloradans a chance to see good baseball players this year (that’s a “Rockies Suck” joke).

► The grift is real, as reports:

► According to a press release from the campaign of Sen. Michael Bennet, the Denver Democrat has hired Justin Lamorte to serve as his 2022 campaign manager. Lamorte was previously a Senior Advisor to Democrat John Hickenlooper’s 2020 Senate campaign.

► As Denver7 reports, your “stimmy” might still be on the way if you receive other federal benefits such as social security.

► As reports, the Biden administration is increasing its efforts to crack down on extremist terrorist groups in the U.S.:

The Biden administration is stepping up efforts to combat domestic extremism, increasing funding to prevent attacks, weighing strategies historically used against foreign terrorist groups and more openly warning the public about the threat.

The attempts to more assertively grapple with the potential for violence from white supremacists and militias are a shift from President Donald J. Trump’s pressure on federal agencies to divert resources to target the antifa movement and leftist groups despite the conclusion by law enforcement authorities that far-right and militia violence was a more serious threat.

President Biden’s approach also continues a slow acknowledgment that especially after the Capitol riot on Jan. 6, the federal government needs to put more attention and money into tracking and heading off threats from inside the United States, after two decades in which it made foreign terrorism the security priority.

In an intelligence report delivered to Congress last month, the administration labeled white supremacists and militia groups as top national security threats. The White House is also discussing with members of Congress the possibility of new domestic terrorism legislation and executive orders to update the criteria of terrorism watch lists to potentially include more homegrown extremists.

► As POLITICO reports, Wyoming Republican Rep. Liz Cheney appears to be winning the battle against Trumpian forces intent on destroying her.

► looks at the police response to the Boulder King Soopers shooting and finds that officers responded as they had been trained to respond.

► Colorado Congressmen Joe Neguse (D-Boulderish) and Ed Perlmutter (D-Jefferson County) are looking for solutions to restrict the type of handguns that shoot rifle rounds — such as the weapon used in the Boulder shootings.

► Ryan Bort of magazine wonders why all the QAnon believers have been quiet about child sex allegations related to Republican Rep. Matt Gaetz.

► Senate Majority Leader Chuck Schumer says the Senate will move ahead on discussions to legalize marijuana despite any misgivings from the Biden administration.

► CBS4 Denver offers some guidance for anyone who has been the victim of identity theft/unemployment insurance fraud.

► 9News looks at how sports betting has gone in Colorado since becoming legal last May.

► You might not be making the point you think you are making, Congressman:

Facebook is allowing human smugglers to use its platform, but not the former President. https://t.co/PjSd9kNAls

► Texas Republican Sery Kim is one of several candidates running for a seat in Congress in a special election on May 1. If you are wondering why her GPA is relevant to any of this, you are not alone; Kim turns 43 years old later this month.

► Some Republicans are mad that infectious disease expert Anthony Fauci is not trying to fix immigration problems in America.

► Republican State Sen. Larry Liston spoke on the Senate floor today fresh off of his trip to rescue Luke Skywalker from the hands of icy death on the planet Hoth:

► We may get to soon learn more about UFOs thanks to a weird bit of language that was buried in a 2020 coronavirus relief bill. As explains:

The stipulation mandates that the director of national intelligence work with the secretary of defense on a report detailing everything the government knows about unidentified flying objects — known in agency lingo as “unidentified aerial phenomena” or “anomalous aerial vehicles.”

It must be made public, and when it is, it will be big, former intelligence director John Ratcliffe said in a recent interview.

► Don’t miss this bonus episode of , in which we try to understand how nothing succeeds like failure within the Colorado Republican Party: