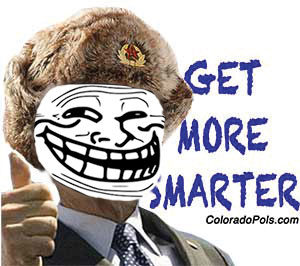 This is the only day in 2021 where it will make sense that Lauren “Q*Bert” Boebert is in Congress. Let’s Get More Smarter; if you think we missed something important, please include the link in the comments below (here’s a good example). If you are more of an audio learner, check out . And don’t forget to find us on Facebook and Twitter.

► President Biden on Wednesday revealed details on his massive infrastructure plan, further signaling a new era of ambitious action from the federal government.
“It is not a plan that tinkers around the edges,” said Biden in a speech outside Pittsburgh. “It is a once-in-a-generation investment in America.”

CBS4 Denver takes a look at what Biden’s infrastructure plan could mean for Colorado.

► As POLITICO reports, Democrat Kerry Donovan, a State Senator from Vail, raised more than $614,000 in just 55 days for her campaign to take on Rep. Lauren “Q*Bert” Boebert (R-ifle) in 2022. This is a YUGE number and solidifies Donovan as the frontrunner for the Democratic nomination in CO-03. Ernest Luning of the publication formerly known as the Colorado Statesman reports that Donovan’s fundraising total actually exceeds $700k.

But perhaps the most interesting note in that POLITICO story is from Illinois, where incumbent Republican Rep. Adam Kinzinger raised $1.1 million DESPITE having voted to impeach former President Trump.

► Republican Danny Moore, the chairperson of Colorado’s Independent Congressional Redistricting Commission, is a lizard man from outer space. We don’t know if that’s true or not, but we’re following Moore’s logic that you can say anything you want so long as you couch it as an “opinion.”

► It’s a story that would otherwise be perfect for April Fool’s Day: A group of Republicans in Colorado is organizing yet another pointless effort to recall Gov. Jared Polis.

► It might be Spring Break for you, but not for the state legislature…

Lawmakers are preparing for the big annual budget battle. As reports, a 3% wage increase for state employees is among the suggestions being discussed.

Officials are debating a change to the state’s foster care system that would allow people to remain in foster care until the age of 21.

Republicans tried and failed to filibuster legislation focused on transgender rights, because that’s what they do.

Denver7 reports on efforts to limit the use of ketamine by first responders. The proposal is part of a broader package of law enforcement reforms expected in the legislature.

► As Paul Waldman writes for , Democrats are winning the argument about the size of government:

And every time a Republican such as Rep. Madison Cawthorn (R-NC) talks about how great it is that government is spending money in his district, he’s making the Democrats’ case for them. [Pols emphasis]

That doesn’t mean he’s going to lose to the next Democrat that comes along saying they can more effectively bring home the bacon to Cawthorn’s heavily Republican district. But in the big picture, you’d rather have even Republicans setting the expectation that government should be doing things in the places people live that will have a positive impact on their lives.

► President Biden will hold his first in-person cabinet meeting today. According to a new poll from The Associated Press, Biden is enjoying strong approval ratings. Most notably, 73% of Americans approve of the way Biden has handled the COVID-19 pandemic thus far.

► As 9News reports, many local health officials would like to see a statewide mask mandate extended for a bit longer.

Colorado distributions from federal COVID-19 funds worked out to $6,434 per resident so far. Colorado ranks 30th among states for what it received on a per capita basis, just behind Oregon and Ohio, and just ahead of Florida and Texas.

The lion’s share of funding, $17.6 billion, went to small businesses — with $14 billion issued as PPP loans and another $3.6 billion in Emergency Injury Disaster Loans and loan advances. Both programs are administered through the SBA, with applications and underwriting handled by banks and other lenders.

► Congressman Doug Lamborn (R-Colorado Springs) is really this much of a jackass.

Elsewhere, has the not-hysterical story about the idea that has Lamborn freaking out.

► An attorney for Rep. Lauren “Q*Bert” Boebert claims that it is perfectly acceptable for her to block followers of her personal Twitter account.

► As reports, a COVID-19 rise in Michigan has health officials worried about a new surge:

In a rural stretch of Michigan along the shore of Lake Huron, coronavirus outbreaks are ripping through churches, schools and restaurants where the virus has infected line cooks and waitresses. For more than a week, ambulances have taken several hourlong trips each day to rush severely ill coronavirus patients to hospitals in Detroit, Saginaw or Port Huron, where beds in intensive-care units await.

Even as the pandemic appears to be waning in some parts of the United States, Michigan is in the throes of a coronavirus outbreak that is one of the largest and most alarming in the country. Infection levels have exploded in recent weeks, in big cities and rural stretches alike.

Ann Hepfer, a health officer for two counties, is racked by worries: about spring break trips that are underway, and about the Easter gatherings that will take place this weekend, when families are fresh off their travels out of state.

► As POLITICO reports, the current state of Trumpland doesn’t sound like much fun:

For some Trump aides, the landscape has been different. Getting jobs in corporate America has been difficult, owing to the often toxic reputation of the 45th president, especially after the Jan. 6 riots on Capitol Hill. Their boss, meanwhile, continues to float the idea that he will run for president again, and he is in the process of setting up a political — and, potentially, social media — apparatus aimed at cementing him as a lasting fixture in GOP politics. That has incentivized his onetime aides to stay in the game. It’s also sparked infighting, as those aides view maintaining their MAGA bona fides as critical for landing jobs on current and future Republican campaigns.

Within Trump’s orbit, former aides and advisers have been squabbling for direct access to the former president as they filter in and out of Mar-a-Lago. Privately, they have accused others of overstating that access in order to score House and Senate clients. There have been whisper campaigns that some former staffers are misleading potential campaigns by telling them that, if hired, their candidate would have a better chance of securing Trump’s endorsement. Other former aides who have promised to organize posh fundraisers for incumbent Republicans and GOP candidates at Mar-a-Lago have become targets of mockery among their peers, who insist there is no single gatekeeper to Trump’s gilded club, where donors regularly gather to hear from the party’s rising stars.

► As reports, the dipshit public health officials in Custer County who tested positive for COVID-19 after rejecting safety measures say they have no regerts.

► Solar energy production in Colorado is expected to double in 2021.

► As Colorado Public Radio reports, the President of Western Colorado University in Gunnison will keep his job despite being an asshat.

►  reports on an intergovernmental agreement…something, something.

► Here’s your latest evidence that the Twitter account of Rep. Lauren “Q*Bert” Boebert is really just a bot:

► The Texas Rangers baseball team is opening its stadium at its FULL 40,000-SEAT CAPACITY. President Biden is not pleased, as ESPN reports:

The Rangers’ Globe Life Field, which can seat 40,300 people, is the only Major League Baseball stadium that will allow 100% crowd capacity on its Opening Day.

“Well, that’s a decision they made. I think it’s a mistake,” Biden said. “They should listen to Dr. [Anthony] Fauci, the scientists and the experts. But I think it’s not responsible.”

► Don’t miss this bonus episode of , featuring an interview with Senator John Hickenlooper (D-Denver) in which he refers to Senate Minority Leader Mitch McConnell as a “schlub”: