Georgia governor: I just found out that asymptomatic people can infect others 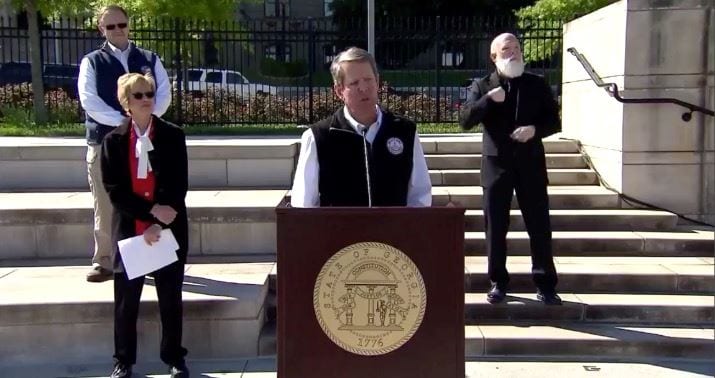 Watching this clip, I realized I picked the wrong week to stop sniffing glue.

No, just kidding. I never stopped.

Sniffing glue: Now more than ever.

The governor, Brian Kemp, said this yesterday in the course of explaining why he was finally issuing a statewide stay-at-home order, much later than many of his colleagues have. In his defense, it’s not like Georgia borders a state with a major emerging outbreak like [checks notes] Florida.

A stunning admission of deadly ignorance from Georgia Gov. Brian Kemp, who says he only just learned that asymptomatic people can transmit #Covid19. “[I]ndividuals could have been infecting people before they ever felt bad, but we didn’t know that until the last 24 hours.” pic.twitter.com/T7NZWk2GDR

Did he misspeak? I can buy that a U.S. governor somehow missed the news that asymptomatics transmit the virus even though (a) Anthony Fauci’s been talking about it since January 31 and (b) it’s the, uh, key factor in why containing the outbreak is so difficult. But it’s impossible to believe his commissioner of public health, Dr. Kathleen Toomey, didn’t know. The farking CDC is located in Georgia, for cripes sake.

Kemp appears to have been citing a new number that the CDC placed on asymptomatic cases. CDC Director Robert Redfield said Monday on NPR that the number of people who have the coronavirus but are asymptomatic may be as high as 25 percent. But the idea that those people were transmitting the virus isn’t news at all.

No one wants to shut down the local economy before it’s absolutely necessary but I remember reading about a German study as far back as March 9 that found “very high levels of virus emitted from the throat of patients from the earliest point in their illness —when people are generally still going about their daily routines.” That was an early-ish clue that not only are people with minor symptoms or no symptoms infectious, they may be more infectious than they are after symptoms finally develop. That was a red alert as to why massive social distancing was urgently needed. Anyone could be spreading it at any given time, no matter how healthy they seemed.

A new study from China supports the theory that asymptomatic carriers are dangerous:

A study of 94 patients in Guangzhou, China, found “the highest viral load in throat swabs at the time of symptom onset” and concluded that meant that patients would be most infectious right before or at the time when symptoms started appearing. That study was published online as a pre-print and has not yet been peer-reviewed, but lead author Dr. Gabriel Leung, dean of medicine at the University of Hong Kong, said it has been accepted for publication in the journal Nature Medicine. Another study, also conducted by researchers in Hong Kong and published in the journal Lancet last week, found that viral load, this time in a saliva sample, was “highest during the first week after symptom onset and subsequently declined with time.”

Relatedly, there are reports floating around today speculating that coronavirus might hit especially hard in the south, particularly the deep south. If so, it’ll be a combination of two things: Bad governance in the form of governors not shuttering businesses early and lots of preexisting health problems that make cases more severe. It’s not a surprise that New Orleans looks to be the next epicenter, possibly with a much higher death rate than New York City:

New Orleans residents suffer from obesity, diabetes and hypertension at rates higher than the national average, conditions that doctors and public health officials say can make patients more vulnerable to COVID-19, the highly contagious respiratory disease caused by the coronavirus.

Some 97% of those killed by COVID-19 in Louisiana had a preexisting condition, according to the state health department. Diabetes was seen in 40% of the deaths, obesity in 25%, chronic kidney disease in 23% and cardiac problems in 21%…

The New Orleans metropolitan statistical area ranks among the worst in the United States for the percentage of residents with diabetes, high blood pressure, and obesity, a Reuters analysis of CDC data shows. An estimated 39% have high blood pressure, 36% are obese and about 15% have diabetes.

The CDC found recently that 78 percent of COVID-19 patients in the U.S. who needed ICU care had an underlying condition. The Atlantic notes that southern states (if you include Oklahoma) comprise the entire top 10 of U.S. states by percentage of population diagnosed with hypertension. Poor health in the south is already pushing up the death toll among younger people, a cohort that’s less vulnerable to succumbing to the disease in other regions. Per the Atlantic, in Kemp’s home state of Georgia, 49 percent of coronavirus deaths thus far were people under 70 years of age. In Colorado, one of the healthier U.S. states, it’s 20 percent. Seventeen percent of Georgia deaths were patients aged 40-59. In Washington state, which had the earliest outbreak in the U.S., that figure is six percent.

It’s nice that red-state governors like Kemp and Mississippi’s Tate Reeves want to prove their MAGA bona fides by holding off to the last possible moment before giving in to coronavirus “panic” or whatever, but Trump gave in many days ago. That was their cover to start shutting down immediately. Why did they wait an extra minute, knowing that they’d have to issue that order soon anyway?

I’ll leave you with this 2017 map from the CDC of hypertension rates in U.S. states. Bluer shades mean a higher percentage. Take this disease seriously, southerners.