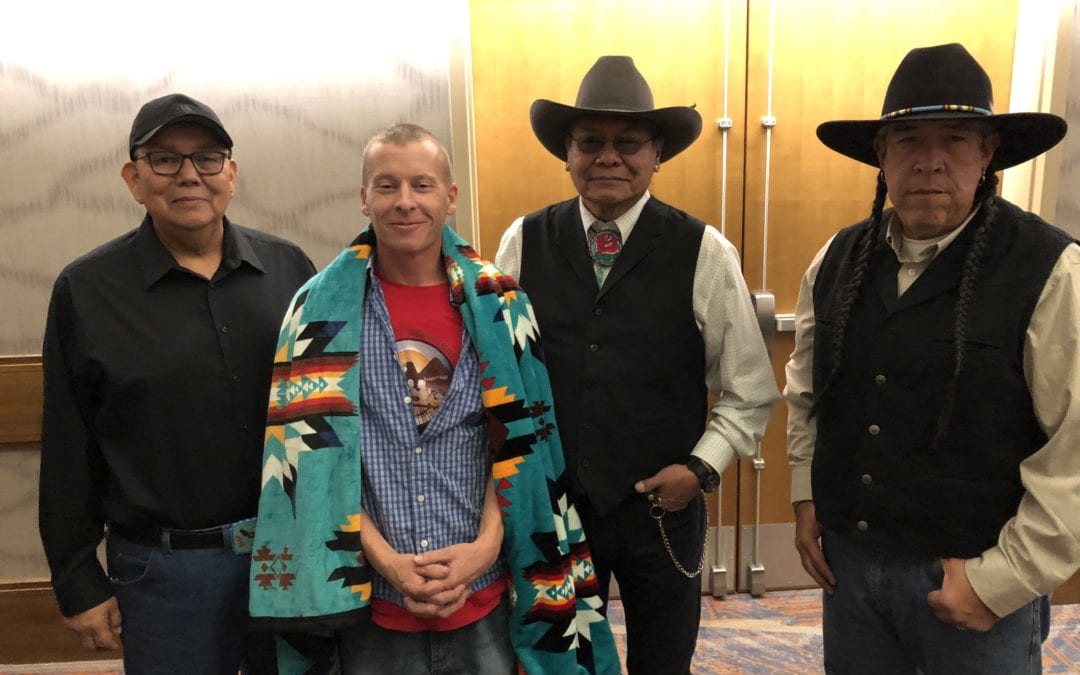 After discovering Native American ruins on his land, white man gives it, and his house, back to the tribe that once lived there

A Colorado landowner was inspired to return his land to Native Americans three years after purchasing it and being “haunted” by the “spirits” of its “rightful owners”/guardians.

When artist and plumber Rich Snyder purchased a few acres of land on Wild Horse Mesa in 2015, he had know idea what he’d find there.

He was just looking for inexpensive land to get off grid, build a homestead, and free himself from civilized life.

He found that and more.

On his hikes around the land, he began to find artifacts of a people that had lived there for thousands of years – strange arrangements of stones forming fireplaces and chimneys along the hillside, a stone ax, and a rock table he believes was used for slaughtering animals.

“I started wondering — who owns this land?” he said. “Whose land was this?” Snyder told the Denver Post.

So he did some research and learned about the Ute hunter-gatherers who had lived in the San Luis Valley for as many as 12,000 years before they were evicted from the region in the 1800s.

Snyder lived on the hauntingly beautiful mesa for 3 years – looking down at wild mustangs, running across windswept fields of sage grass, and up at meteor showers and stars, until one day he decided the land did not belong to him.

“It was a dream I couldn’t hold onto,” he said.

He’d had a premonition about it the first time he visited the land after he bought it.

“After falling into an afternoon nap, he dreamed that his tent was gone and indigenous children were touching his skin. He snapped awake, packed his truck and left for a hotel,” the Denver Post reports.

So he got in contact with the Ute tribe via UteTribe.com.

“I bought a lot of land that looks like your people lived on with buildings, graves … a very sacred place,” he wrote in an email.

“Would love to have the land checked out and give it to your people … it has given peace to me to be there.”

In late 2018, he deeded his 2.5 acre homestead (including a solar-powered cabin he built), along with another property he purchased down the road, to the tribe.

He valued the gift at around $10,000, which is what he spent on the land and building materials.

“This good man reached out to the Ute Tribe, on his own, to return this land to us,” tribe member Luke Duncan said in a . “We hope it can inspire others to take similar actions.”

The tribe is now working on purchasing more land on the Wild Horse Mesa and in the surrounding San Luis Valley, using part of the $250,000 a California woman recently have the tribe, describing it as “returning what was stolen” from her family’s homesteading profits on former Ute land.

A year later, Snyder, a nomad of sorts, has returned living in Iowa part time and is saving up for another homestead, perhaps on back on the mesa.

Members of the Ute tribe brought him on stage last year at the National Congress of American Indians in Denver, where he was wrapped in a ceremonial blanket and asked to speak to the crowd.

Later, he was given a huge buffalo fur at the Bear Dance on the Uintah & Ouray Reservation.

“I never felt energy like that in my life. I never did anything that good in my life,” he said. “The day someone finishes paying off their 30-year mortgage, they’re probably as happy as me now.”