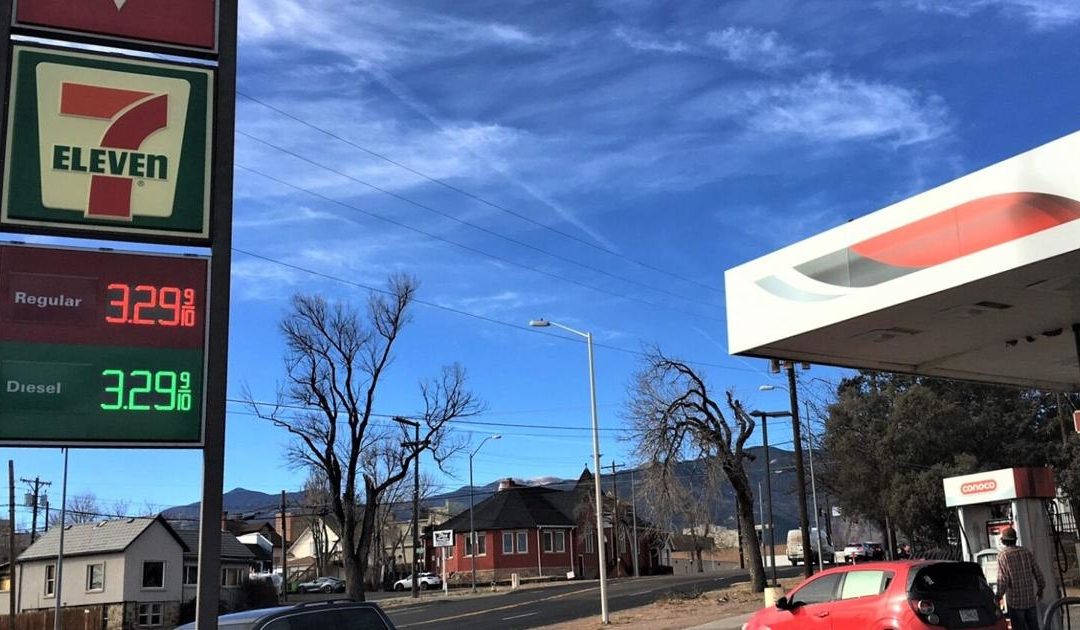 Gas prices — not snowflakes — are falling in Colorado Springs ahead of Saturday’s Christmas holiday.

And prices are likely to keep on falling into the new year.

Colorado Springs motorists paid an average $3.338 per gallon for unleaded gas Wednesday — a six-month low, though still about $1.10 higher than the same time last year, according to , the online service that tracks prices nationwide.

Prices on Wednesday were as low as $2.79 a gallon at the Sam’s Club on Woodmen Road and Costco on North Nevada Avenue, though those prices were for members of the wholesale clubs, GasBuddy figures show.

Elsewhere in the Colorado Springs area, a pair of convenience stories in unincorporated Security, south of town, were selling unleaded regular for $3.03 a gallon, according to GasBuddy. On the Springs’ far north side, motorists paid as much as $3.53 a gallon.

The month-old omicron variant of the coronavirus — which news organizations report has surpassed the delta variant to become the dominant strain in some countries — is helping to drive fuel prices lower, said Patrick DeHaan, GasBuddy’s head of petroleum analysis.

As cases surge, the demand for gas and oil has declined and prices have followed, he said.

And as some U.S. cities mandate new restrictions on public gatherings, and some European nations impose lockdowns, demand — and prices — likely will decline further, DeHaan said.

“Those are the type of restrictions and limitations on movements and limitations on where you can go that would usher in lower oil demand,” DeHaan said. “That’s why, generally, when there’s more fear in the market about this variant, that’s where it can hit oil demand. When governments issue these restrictions, regardless of the science of them, it generally leads to lower oil consumption.”

In Colorado Springs, gas prices could fall another 5 to 10 cents per gallon over the next few weeks, and even as much as 15 to 20 cents, DeHaan said.

Today’s lower gas prices in the Springs mark a turnaround since the summer, DeHaan said.

Relatively tight supplies of gas in Colorado and the Rocky Mountain region, coupled with strong demand from motorists who traveled over the summer and visited tourist destinations, helped push gas costs higher, he said.

By Aug. 11, Springs gas prices had climbed to a seven-year high of $3.64 a gallon, GasBuddy figures show.

Since then, gas inventories in the Rocky Mountains became more plentiful and fuel prices slipped — a decline now being accelerated by fallout from the omicron variant, DeHaan said.

“Now you’ll probably start to see a lot of relief,” he said.