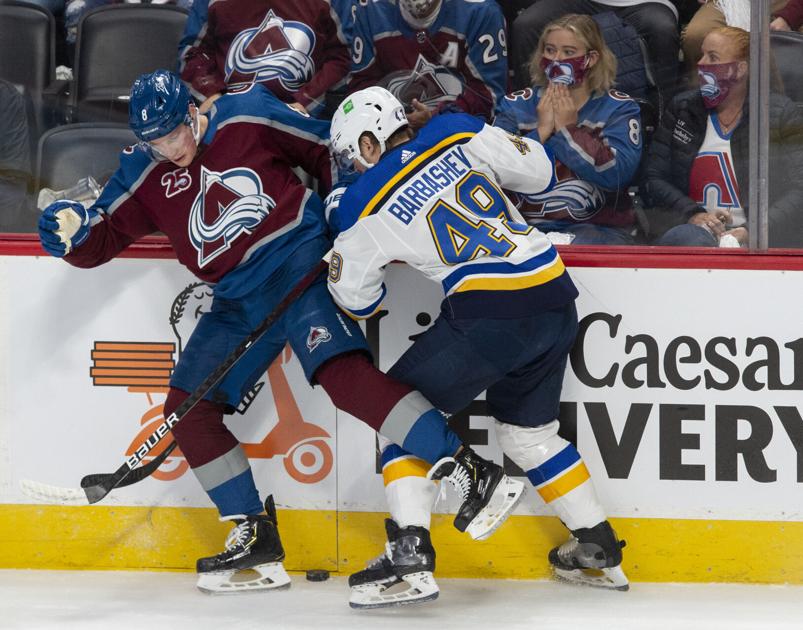 DENVER — The Colorado Avalanche’s postseason opener had it all.

On the first shift of Monday’s third period, Nathan MacKinnon took a pass from Mikko Rantanen and put it over Jordan Binnington’s shoulder before the Blues goaltender could react. That secured a Game 1 win for the Avalanche at Ball Arena.

Gabriel Landeskog contributed an insurance tip-in, two assists and a first-period fight for a Gordie Howe hat trick in the 4-1 victory.

As Rantanen turned to head up the ice, Brayden Schenn caught him in the lower leg and sent him flying. Rantanen was up and moving again quickly, but his linemate and captain jumped in.

Landeskog and Schenn each shrugged off an intervening official. After punches from all directions, Schenn went down first with Landeskog’s elbow cocked back for more.

The team said the last time an Avalanche player took a fighting major in a playoff game was 2008.

A Gordie Howe hat trick, named for the Hall of Famer, consists of a goal, an assist and a fight. Landeskog and MacKinnon scored during the third period and MacKinnon added an empty netter.

“They were making big plays all over the ice, both on the offensive side of things and the defensive side,” coach Jared Bednar said of his top line.

Landeskog didn’t have an issue with the hit on Rantanen per se. He said he didn’t think it was dirty. He said his team, however, had spent the first 10 minutes of the playoffs “tiptoeing our way into it.”

“Had a feeling that Schenn was going to run around in the first period and he’s a physical player. He’s a good player,” Landeskog said. “Just have to stand up for my teammates.

“I thought that was going to calm it down a little bit and get the crowd into it.”

Landeskog also voiced suspicions that Binnington wanted a similar boost for his own team when he skated down the ice and started jawing at Philipp Grubauer (22 saves) after the loss.

“It is what it is. We’ll be ready Wednesday night,” Landeskog said.

Binnington was occasionally exceptional after allowing the Avalanche’s first goal to Makar, on which he was screened. He made 46 saves including one where he snapped his leg up to deny Rantanen.

With 49 seconds remaining in the Avalanche’s first power play and 4:45 left in the first period, Makar took the puck off the boards and swerved around Tyler Bozak. Bozak could only watch as Makar lobbed a shot through traffic that made it 1-0.

Ryan Graves staved off the Blues’ tying goal a little longer, coming out of nowhere to block a Mike Hoffman wraparound deposit into an empty net. He also took two minor penalties the Avalanche were able to kill off.

A quick 2-on-1 developed for Ivan Barbashev and Jordan Kyrou. Kyrou put the puck past the goal post before Grubauer could close the gap.

“We might have gotten away from our game a little bit in the second period there, but we were able to find a win in the third,” Makar said.