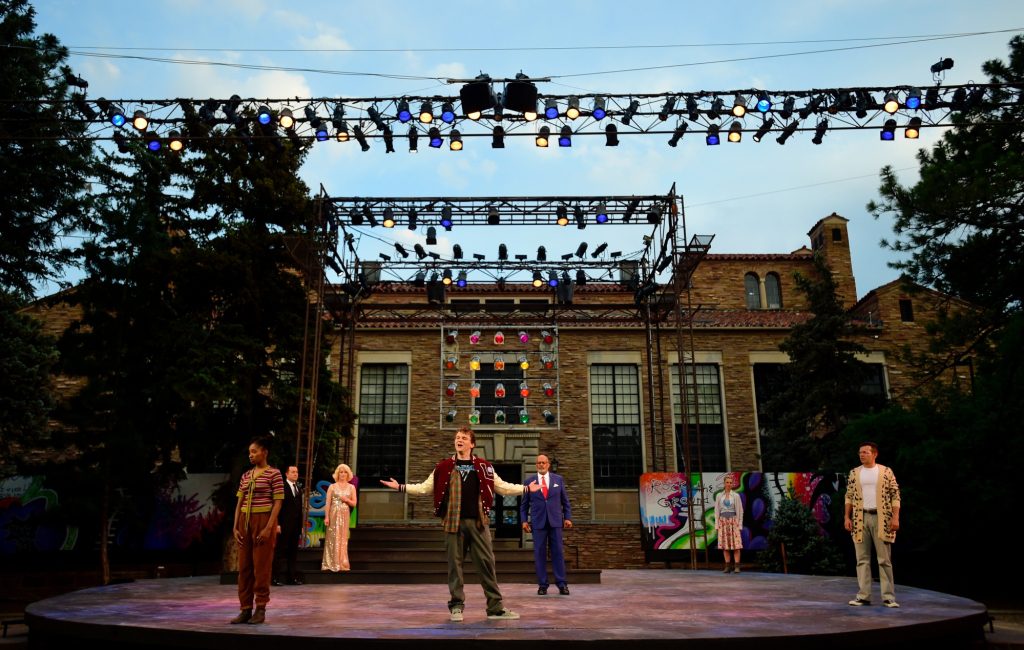 This summer, Colorado Shakespeare Festival returned to the stage and although productions were reduced capacity, the selection still delivered riveting theatrical work the long-running event is known for.

Colorado Shakespeare Festival (CSF) has announced its plans for 2022 and the upcoming season promises five plays — running from June 5 to Aug. 7 — that will be performed in front of full audiences.

“It was great and weird welcoming actors back,” said Tim Orr, producing artistic director of Colorado Shakespeare Festival. “I realized I was out of practice talking to humans in person. It took me a few hours to stop just watching their faces moving and start listening.”

The 2020 festival was canceled due to the pandemic. With only a limited amount of tickets released for the 2021 season, tickets for the shows sold out in record time.

For Orr, forgoing elaborate sets for this most recent season brought about a new appreciation for the breathtaking Mary Rippon Outdoor Theatre on the University of Colorado Boulder campus.

“I was amazed at the beauty of a simple stage and the lighting of the surrounding buildings,” Orr said. “It started out as a function of budget, but it became so beautiful, so dramatic. The lit architecture of the theater just blew our minds.”

“The Two Gentleman of Verona,” directed by Carolyn Howarth, kicks off the season on June 5 at Mary Rippon Outdoor Theatre.

Considered by some to be Shakespeare’s first play, it follows two best friends as they try to pursue the same love interest while traveling in Milan.

CSF’s 2021 production of “A Midsummer Night’s Dream” had a 1980s twist, and once again creative license is being used in “The Two Gentleman of Verona” with it set in mid-century modern Italy.

“Every season is nothing but new elements from top to bottom, that’s the fun part of coming to the Colorado Shakespeare Festival,” Orr said. “But this year, there’s a dog on stage in ‘Two Gents.’ We’ll be holding dog auditions. That doesn’t happen very often here.”

CSF is also giving a second chance to those previous productions that had to be canceled due to the pandemic.

“We’re reprogramming the indoor 2020 season for 2022 with ‘All’s Well That Ends Well’ and ‘Coriolanus’,” Orr said. “ Two years ago we were very excited about these titles together in repertory and we didn’t want to let them go unproduced.”

CSF’s indoor season will conclude with “Coriolanus.” The war play that deals with the timely themes of democracy and political power will be directed by Anthony Powell and will run from July 16- Aug. 7 at University Theatre.

In addition to Shakespearean works, CSF will feature a couple of plays not authored by the prolific Bard.

One will be “The Book of Will,” a comedic offering by Lauren Gunderson that tells the true tale of actors Henry Condell and John Heminges — friends of Shakespeare who worked hard to get his work published after his death.

CSF veteran Rodney Lizcano — most recently seen as Oberon in 2021’s “A Midsummer Night’s Dream” — is set to direct the production that will run July 2-Aug. 6.

“I can’t think of a more fitting play to celebrate returning to the Mary Rippon Outdoor Theatre, at full capacity,” Orr said. “‘The Book of Will’ is a love letter to Shakespeare and Shakespeare festivals, to the enduring power of theater and the remembrance of loved ones. It’s thrilling, funny and beautifully moving. We read it and fell in love with it.”

Theatergoers can also look forward to Ben Jonson’s “The Alchemist” — a satirical comedy that follows the events that transpire when a butler turns his employer’s home into a den of debauchery after the homeowner flees London due to a plague.

“The Alchemist,” directed by Kevin Rich, will take place on Aug. 2 for one night only.

Auditions, callbacks and casting for a variety of CSF’s scheduled productions will take place in November and December.

This summer’s season was an emotional return for organizers, actors, crew members and attendees feeling the withdrawal of in-person productions.

“When I stood at the back of the Mary Rippon during the opening week of the festival this past June, I welled up with tears,” said Becca Vaclavik, assistant director of public relations for CU Presents. “It was surprisingly emotional to be creating art together again and think about how many people were finally coming back to work or enjoying community activities again.”

“Still, it felt as if something was missing without our complete community in place,” Vaclavik said. “In 2022, knowing we’ll have full houses again and be able to open up both venues and produce a complete and full-scale season is something truly special. I’m counting down the days.”