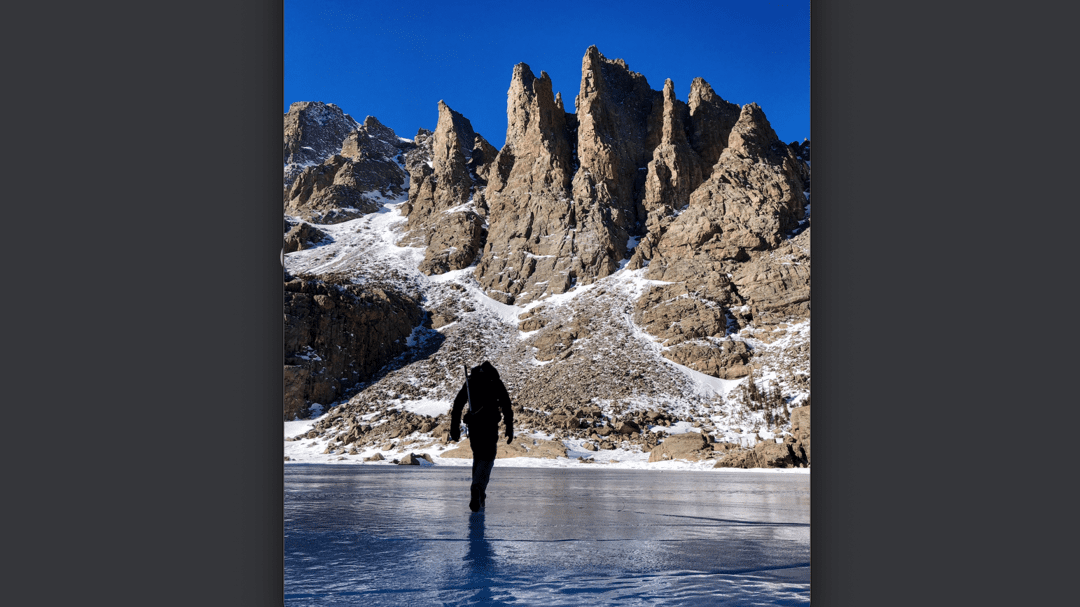 Tucked away in the heart of Rocky Mountain National Park, the winter route to Sky Pond is not a trek for the inexperienced hiker. A destination found at the end of a trail that passes snow-filled lake scenes and icy waterfalls, those embarking on this adventure should proceed with extreme caution and be prepared to face off with cold weather hazards.

Aware of the risks that come with this hike, I carefully picked the ‘right’ day to hit the trail. While cold weather would be present, including a sub-zero windchill, forecasted blue skies and lack of recent snow would make trail finding easier – or so I anticipated. While Sky Pond is a highly trafficked route during summer months, it becomes far less-trafficked in the winter as fewer people brave the intense cold weather conditions often present in the area.

The standard route to Sky Pond starts at Rocky Mountain National Park’s Glacier Gorge Trailhead, clocking in at about 9 miles round-trip, with close to 1,800 feet of vertical gain. This is also where popular spots such as Bear Lake, Alberta Falls, and The Loch can be reached, making an early arrival advised as parking is limited.

Upon reaching The Loch, the first thing thing to note was a shift in the weather. Winds started to pick up and would keep things cold and loud from there on out. The second thing to note was that the trail almost immediately disappeared.

Utilizing a downloaded map on my phone’s AllTrails app (that I had also printed) and the GPS mapping on my Garmin inReach, I felt comfortable pushing on through the lack of tracked route. Keeping track of a known landmark – a nearby frozen creek – also helped with navigation during this portion of the hike.

Surrounded by a wall of mountains and howling wind, the trail continues, gaining elevation quickly after leaving The Loch behind.

While no tracks existed – either due to windblown snow or lack of people on the route – following the GPS and prior knowledge of the route allowed for navigation of the uphill terrain. Though snowshoes had not been needed prior to this, they could have been nice at several points throughout this stretch.

With careful navigation, the base of Timberline Falls can be reached. This is a frozen waterfall that must be climbed to reach the basin that holds Lake of Glass and Sky Pond. I write “must be climbed,” but it’s worth noting that climbing it was possible without having to touch much ice on the date that I was there – it was most comparable to class three scrambling. Still, snow-covered holds made my boot crampons necessary and my axe a tool that I was thankful to have brought along.

At the top of the falls, the view opened up to the Lake of Glass and another huge uptick in wind. Had the wind not been present, the rest of the hike would have been a very different experience. But the wind was there, and it seemed to be much stronger than what had been predicted for the area. It was an important reminder to always be prepared for worse conditions than anticipated, especially in the winter.

This is where the winter trail got a bit more abstract.

On terrain made up of rocks and pockets of deep snow, safe route-finding was much more involved. Familiar with the standard approach and comfortable with high-elevation scrambling, I opted to stay high, where more rock was showing, making my way in the direction of Sky Pond. Slowly, but surely, progress was made, albeit while I was breathing quite hard.

After a bit of scrambling that took a little longer than expected and involved a few slips into waist-deep snow pockets, the route dropped into the portion of the basin where Sky Pond is located.

I had arrived at, perhaps, the most beautiful place in Colorado. Jagged rock walls towered above me. A dry blast of snow whisked across the opaque ice covering the pond, skipping across weathered cracks and small bubbles of air frozen in place just beneath the surface.

I stepped onto the ice, my crampons crunching as they made their mark. From the center of the alpine lake, the full view of the surroundings could be appreciated.

The most prominent view at Sky Pond is of the iconic Cathedral Spires, which includes the Sharkstooth formation. This formation demands attention in photos of the spot and I found it even more awe-inducing in real life. Taylor Peak also stands tall above the pond, hitting an elevation of 13,158 feet at the summit – more than 2,000 feet above Sky Pond at 10,900 feet above sea-level.

After staying at Sky Pond for as long as the planned schedule would allow, I made the return trip – this time, much easier having traveled the route in the opposite direction and with better lighting. In about half the time that it took to reach the destination, I was in the car and headed home.

Overall, my trip to Sky Pond was an unforgettable experience, as many in Colorado’s Great Outdoors tend to be. While I expected the trail to be more difficult to follow during the winter, I didn’t expect to be breaking through the snow on the trail multiple days after the last snowfall. This added a layer of navigation and physicality that could have been a deterrent if I wasn’t prepared.

Surely one of the most beautiful places in Colorado, Sky Pond is a spot admired by many, but seen in-person by few. If you plan to visit this destination, proceed with extreme caution, make decisions that prioritize safety, and, as always, leave no trace.

Editor’s Note: Ice safety is something that should be taken very seriously. Know how to judge if ice will be able to hold you and know what to do if it doesn’t. Don’t assume that because ice holds someone else, that it will also be safe for you. Accidents can always happen and they can be deadly. Proceed with extreme caution and only if you are experienced in traveling over ice.