From discovery to decline: A scientist’s long fight for one of Colorado’s rarest birds 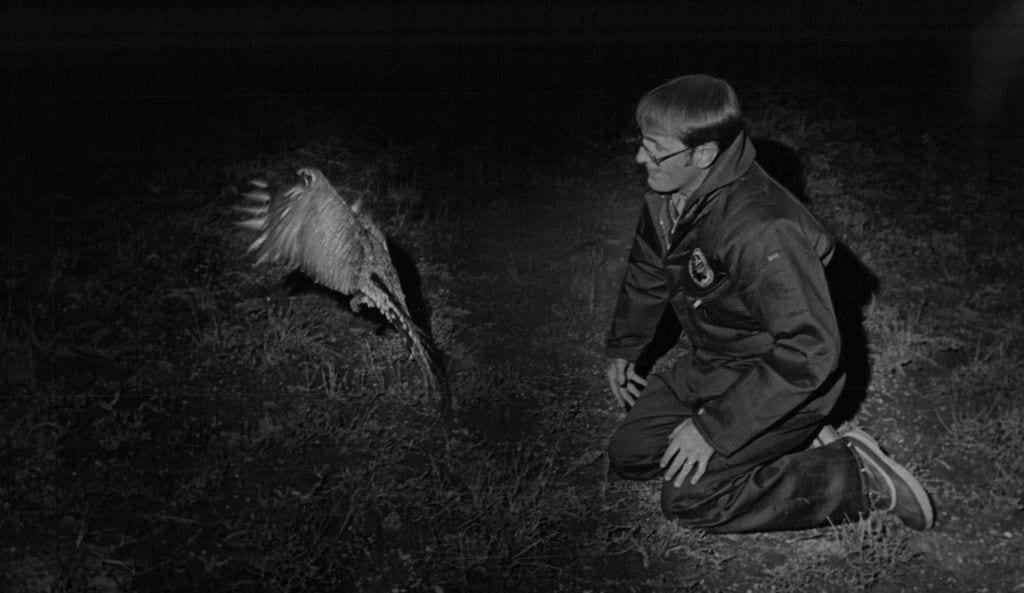 He then spent his life advocating for the birds, organizing conservation efforts, leading community meetings and spearheading research. But this year, the species’ population dropped to its lowest average levels since standardized tracking began in 1996, and Braun, 81, sees the end drawing near.

“I’m not going to live forever,” he said. “The question is, will I outlive the Gunnison sage grouse or will they outlive me?”

It was the late 1970s when Braun first recognized that the sage grouse in Colorado were different from those found elsewhere — they were smaller, much smaller, he found when he examined wing samples left in collection barrels by local hunters.

Further research began in earnest in the 1980s, and Braun was joined by several graduate students and early-career scientists as they meticulously studied the Gunnison sage grouse’s habitat, range and behavior. During the busy spring breeding season, when the male sage grouse performed their elaborate, wacky mating display — inflating air sacks in their throats, vocalizing melodic pops, spreading their tail feathers and strutting across the breeding grounds — the team would work to the point of exhaustion, said Jerry Hupp, a former student.

Clait Braun in the Gunnison Basin in August 2020.

“We’d often trap the birds for banding, or attaching radio transmitters, or taking blood samples,” he said. “We’d trap them at night, with spotlights and nets, and that makes for not getting a lot of sleep. Then during the day you’re out doing surveys of their strutting grounds, or following birds with radio transmitters, or figuring out where the best place to go trapping is…It took a lot of drive to come out and make that happen, and Clait would come out and lead by example.”

The research showed that not only were the Colorado birds smaller, but they had different courtship behavior and genetic distinctions — they were a new species, separate from the Greater sage grouse that live across the West.

“The problem was that once we reported this in the biological literature, people would want it to be labeled a different species,” Braun said in a recent phone interview from his Arizona home. “I worked for a game and wildlife agency (Colorado Division of Wildlife). They were not interested in a new species that might be endangered or threatened. I had to be very careful about how I approached things.”

Now, there are an estimated 2,700 Gunnison sage grouse left, anywhere.

Once the researchers realized they had a new species, Braun in the mid-1990s began holding community meetings and pulling together various stakeholders to tell them about the findings and begin to establish support for conservation plans.

“I knew it would be political dynamite,” he said. “And it was.”

The meetings were tense. Ranchers who relied on public land — which was also key bird habitat — worried that they’d be cut off, and officials were hesitant to recognize that the species was distinct. Braun clicked through slide presentations for standing-room only audiences at the fairgrounds. He tells tales of locals showing up to the meetings with ropes, threatening a lynching.

But he was stubborn, independent and at times brash, his colleagues and former students said. He was also a consummate professional, a scientist with a single-minded focus on the work and a deep and varied knowledge of his field. He hated red ink and instead used a blue pencil to edit his students’ papers, sending the pages back “completely blue,” said former student Sara Oyler-McCance. He swore off email even into the late 1990s, insisting instead on corresponding through letters, and he became a fierce advocate for the Gunnison sage grouse.

Even before the species was recognized, Braun brought together a working group of representatives from the Bureau of Land Management, Gunnison County, the U.S. Forest Service and others to develop conservation plans.

“When you look back on how he started and got people to come together, being aware, recognizing this as a species, implementing conservation measures, changing how we assessed and tracked populations and understood what they do — the seminal basic knowledge on sage grouse, and Gunnison sage grouse, comes from Clait’s work,” said Cameron Aldridge, who worked with Braun in the late 1990s.

In 1999, Braun retired after 30 years with the Colorado Division of Wildlife, and in 2000 the team published its findings of the Gunnison sage grouse as a new species, estimating that the total population was at that point around 5,000, with 3,000 of those birds in the Gunnison basin.

With so much of the species concentrated in Gunnison, the basin has always been the key to the birds’ survival, Braun said.

“If the bird is going to be maintained, going to have adequate habitat, things have got to change, and the only place it can change in the short term is the Gunnison basin,” Braun said. “That’s the whole crux of it.  If you don’t do something there, you aren’t going to have the bird in perpetuity.”

In the years after it was named a new species, millions of dollars were spent on conservation efforts. Gunnison County hired a sage-grouse coordinator in 2005. The federal government paid for aerial seeding to provide food for the grouse and changed their mowing practices to cater to the bird. In 2014, the species was listed as threatened under the Endangered Species Act.

The Gunnison sage grouse numbers increased between 2004 and 2007, and annual counts of the males at the breeding grounds have shown the total population hovering between about 4,000 and 5,000 since then — until 2018, when the numbers began to plunge.

It could be part of a cyclical decline, a temporary dip driven by drought and two tough winters, but with so few birds left and with their habitat continually shrinking, the drop has raised alarm bells for conservationists, and for Braun.

“If we do things right, we can stretch the population out for another 20 years, maybe,” Braun said. “Maybe. But one catastrophic event, like a big wildfire, could do it in.”

In early December, the Center for Biological Diversity and Western Watersheds Project filed a lawsuit against the Bureau of Land Management, U.S. Forest Service, National Park Service and the U.S. Fish and Wildlife Service, alleging that the federal agencies have failed to do enough to protect the Gunnison sage grouse.

The lawsuit, one of many over the years, takes aim at the amount of grazing that is allowed on publicly owned sage grouse habitat, arguing that the grazing is harming the birds by destroying vegetation they rely on, limiting their ability to breed and hide from predators.

“Ultimately the bird is critically imperiled and something has to change,” said Talasi Brooks, staff attorney at Western Watersheds. “Maybe it’s taking cows off the land, maybe it is changing the season of use…but one way or another, any movement toward actually doing something about the threat of livestock grazing to the sage grouse would be a good thing.”

Watching the decline of the species he helped discover has been “terrible” over the years, Braun said.

“It was just really like your children were dying in front of you,” he said. He still hopes steps will be taken to save the bird for the long term, though looking back, he wonders if he didn’t do enough to ensure its survival, despite his decades of dedicated work.

“It’s just an insidious thing that creeps up on you,” he said. “If you don’t pay attention, all the sudden you don’t have anything to work with. And that’s where we are now.”

Still, efforts are underway to protect the birds, said Jessica Young, who pushed Braun to recognize the birds as a separate species when they worked together beginning in the 80s.

“Since I live in Gunnison and make my life in Gunnison, I see day in and day out how hard people are working on the issue,” she said. “What he sees from the outside is the numbers, and the decline and the small populations literally starting to wink out. So we see two different worlds. I’m deeply concerned about them. I absolutely consider them imperiled….but I might have a bit more hope because of how hard I’ve seen people try.”

Braun’s passion and fearless advocacy helped to shape a generation of scientists, many of whom still study the sage grouse, Oyler-McCance said.

“Not only was he supportive, but he got us to love the species he loves so much,” she said. When she worked with him as a graduate student, Braun seemed to think about it “every moment of every day,” she said.

“I think he’s not done fighting,” she said. “I can’t imagine he’ll ever stop thinking about it until he is gone.”