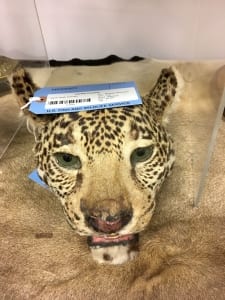 A jaguar head that had been seized by US Fish and Wildlife Service officials. The head was displayed in an educational area of a USFWS facility in Colorado. (Photo: Lisa Sorg)

A stool made from an elephant’s foot, another from a bear’s paw. A giraffe, missing its body, leaned in a corner. Dozens of jaguar heads, tagged and wrapped in plastic, lined a 20-foot-long shelf. Across the aisle, cowboy boots, in sizes that would fit toddlers through adults, sheathed in snake or alligator skin. Purses and lamps, rugs and blankets: all made from animals.

From ceiling to floor, a warehouse in Colorado, operated by the US Fish and Wildlife Service, holds thousands of seized animal parts, evidence of a widespread, illegal international wildlife trade.

I visited the warehouse with other environmental journalists at a conference last fall. The sheer amount of body parts overwhelmed us. (We were prohibited from taking photographs in the evidence room, but could do so in the public educational areas.)

Roughly 7,000 species of animals, reptiles, birds and insects are trafficked, according to the Work Wildlife Seizures database. The wildlife marketplace, both legal and illegal, has not only ethical and ecological implications, but also public health consequences. Zoonotic diseases, as they’re known, can jump from animals and insects to people. Some are well-known — West Nile fever, the plague, Lyme disease, rabies, toxoplasmosis and ringworm — and others, like COVID-19, are new.

An Indian pangolin (Photo by Ajit K. Huilgol via the US Fish and Wildlife Service)

The current global health crisis began in a wildlife market in the province of Wuhan, China. The coronavirus, which causes COVID-19, might have incubated in a bat, and then passed to a pangolin, a mammal and scaly anteater that is widely trafficked for its meat and use in traditional medicine. And from the pangolin to us, humans.

An estimated 1 million pangolins have been poached in the last decade, in Asia and Africa, according to TRAFFIC, a non-governmental monitoring network based in the United Kingdom.

The World Wildlife Federation reports that of the eight pangolin species, six are either critically endangered or endangered; two are considered vulnerable to extinction. They are protected under national and international laws, but nonetheless are often trafficked illegally.

Eating pangolins has been prohibited in China since 1989. However, under special circumstances, pangolin scales can be traded and used in China for medicinal use, according to a TRAFFIC report. “However, there is a lack of evidence on how effective the regulations are in preventing illegal trade in pangolin parts,” by traditional Chinese medicine shops and animal wholesalers, the report says.

A bat seized by US Fish and Wildlife Service (Photo: Lisa Sorg)

The illegal wildlife trade is not limited to Asian and African countries. The US is a robust market for contraband, particularly for mammals and reptiles. An article in the academic journal Global Crime noted that from 2003 to 2013, US imports were “substantial, accounting for over 2.5 million animal products and over 90,000 live animals seized, bearing in mind that much of wildlife smuggling goes undetected or undeclared.”

Moreover,  the US Fish and Wildlife Service has only about 300 federal agents to inspect more than 70 airports and seaports. (Most of the trade occurs in air cargo, although some smugglers also bring items in their personal luggage.)

Internationally, nearly 175 countries have signed CITES, the Convention on International Trade in Endangered Species of Wild Flora and Fauna. Between 2010 and 2014, more than 64,000 live wild animals belonging to 359 species were seized by authorities. But a report by Nature Conservation showed that less than a third of those nations reported seizures, suggested “that the records represent only a fraction of the actual animals being illegally traded.