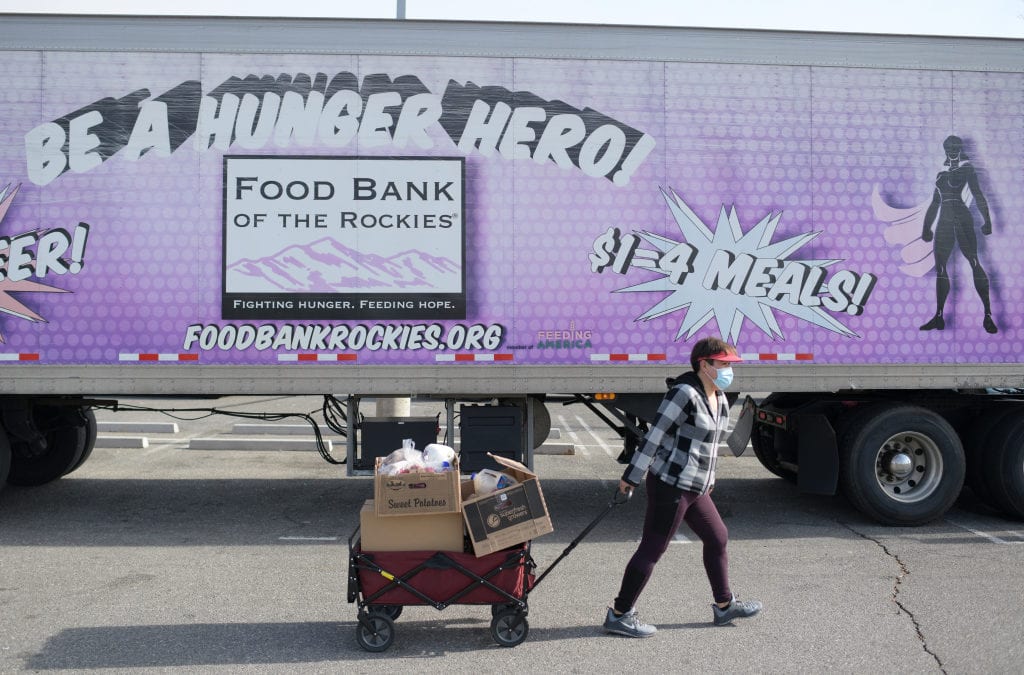 When the coronavirus pandemic hit this spring, Erin Pulling, president and CEO of the Food Bank of the Rockies, said she knew her organization would have to step up.

Sure enough, the nonprofit saw a nearly immediate increase in the need for food across its service area of Colorado and Wyoming, Pulling said. The increase was so stark that the nonprofit was forced to gamble and buy much more food than normal.

Increasing their operating budget by about 50%, Pulling said they had to hope that an increase in donations and volunteers would help cover those costs.

“When COVID hit we were reading the news about people losing their jobs, and we knew that economic hardship would follow,” Pulling said. “And food insecurity would be an immediate consequence of that, and likely long lasting.”

That food is distributed through the organization’s many food pantry partners. Much of the pronounced food insecurity can be found in Denver — the largest metropolitan area covered by the food bank — and in Colorado’s mountain towns, Pulling said.

The organization also hosts mobile pantries, where a large semi sets up shop and passes out food in an area without a brick-and-mortar pantry, said Aditi Desai, vice president of marketing and communications. One at Dick’s Sporting Goods Park in Denver served over 900 people.

Fortunately just as the need increased, so did the cash donations and volunteers stepping up, Pulling said. Some who lost their jobs kept donating, others even gave the government stimulus checks to the cause.

“It has been tremendously inspiring to see people make financial gifts and people to show up to volunteer,” Pulling said.

The 42-year-old organization is also a recipient of funding from The Denver Post Community Foundation’s Season to Share program.

But Pulling said more is still needed as the nonprofit seeks to feed all those in need. Estimates now show that the increased food insecurity could last another 18 months. Not only has the price of food gone up, but the organization has had to hire new drivers, staff a new warehouse and add a night shift.

There is no typical person who benefits from the pantries, Desai said, and there’s no limit to who might need help.

“You can’t stereotype anyone in terms of the type of person that needs to come and get additional food support,” Desai said, recalling a line of vehicles she saw outside a mobile pantry. “There were Escalades, there were beautiful cars in this line. Food insecurity can hit anyone at any point in time.”

While some volunteers are needed, Pulling said the organization needs cash the most. That provides versatility to direct resources to where they need is greatest. Every dollar donated can buy enough food for four meals, she said.

“We’re depending on those financial gifts to get through the holidays and then for the long term,” Pulling said. “Because we are still going to be here, responding to this crisis.”

Anyone seeking more information or wishing to donate or volunteer should go to .

Food Bank of the Rockies

Number of partners: More than 700 food pantry and other hunger relief partners across Colorado and Wyoming