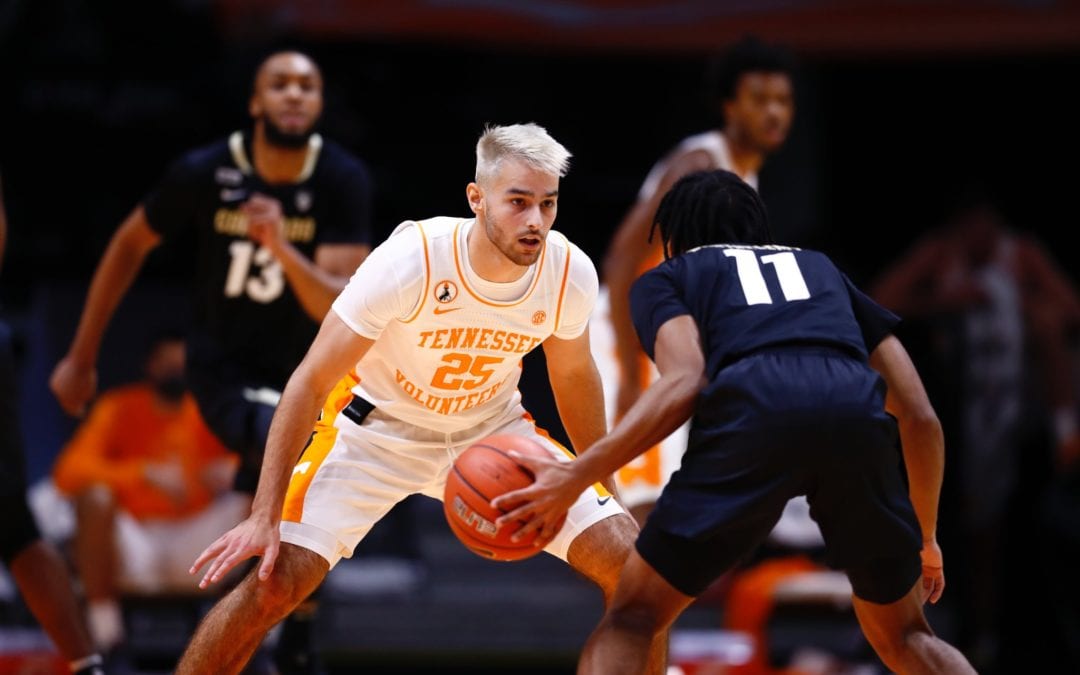 No. 12 Tennessee defeated Colorado 56-47 in its first game of the season on Tuesday night inside of Thompson-Boling Arena.

It wasn’t the cleanest of games for the Vols coming off of the COVID-19 shutdown that forced the program to cancel its first four games of the season. Still, defense led Tennessee to victory in its first game in 276 days. Senior forward John Fulkerson and sophomore guard Santiago Vescovi led the Vols in scoring with 11 points apiece.

Here are the five biggest observations from Tennessee’s season-opening win:

Defense led the Vols to victory in their season-opener. Tennessee came out of the gates clicking on all-cylinders to jump out to an early 17-2 with 12:22 remaining courtesy of a pair of 3’s from Santiago Vescovi and Victor Bailey Jr.

The Tennessee run implored Colorado head coach Tad Boyle to implement a zone defense. The desperate move paid off, as the Buffaloes cut the Tennessee lead down to four just before the half. A Vescovi three gave the Vols a 31-24 halftime lead, but not before Colorado closed out the final 12 minutes with a 22-14 run.

Colorado was able to cut the Tennessee lead in the first half and remain in the game because of its zone defense, but it was unable to take advantage of the lull UT’s offense was in because of UT’s defense. The Vols held Colorado to 33% shooting from the field and 23% from behind the 3-point line.

Colorado only scored 23 points in the second half as it only had one player finish in double-figures.

Colorado struggled to defend Tennessee in man-defense, but quickly switched to a zone defense in a desperation move when it was down 15 early on. It worked, as Tennessee scored 17 points within the first eight minutes of the game, and then just 14 points in the final 12 minutes of the half.

“I don’t think that’s what Tad (Boyle) wants to do,” Vols head coach Rick Barnes said after the game. “He was going to stay in it until we hurt it and we never really did. We wanted to get the ball in the middle, that’s what we’ve always done with it. I thought once we started missing those shots, we had guys that were really hesitant to shoot the shot we need to take. I thought it affected us on the defense end, too, where we got back on our heals.”

“I thought it was really a smart move on him to go zone because we haven’t had enough days since we were shutdown to spend as much time on our zone offense as we had previously before we got shutdown ourselves,” Barnes said. “We just weren’t sharp there. We got very hesitant. That’s not something I’m not really concerned about.”

Tennessee may have struggled against the zone, but that was’t what concerned Barnes the most about his team’s performance. The Vols were out-rebounded 38-32 by Colorado on the glass and gave up 12 offensive rebounds. The Buffaloes were able to scored 11 second chance points off of those rebounds.

Pons had a team-high 10 rebounds, but only one other Vol had more than four. Josiah-Jordan James had six rebounds, while EJ Anosike had four. John Fulkerson grabbed three rebounds. Neither Oliver Nkamhoua or Uros Plavsic grabbed a rebound in their combined nine minutes of action as the backup post players.

Vols freshman Keon Johnson sparked the Vols in the second half. After Colorado cut it to six, Johnson made two great plays on the defensive end to force a turnover. Then, on the other end, Vescovi delivered a beautiful pass to Johnson for an alley-oop that injected the offense with some much-needed energy. Fellow five-star freshman guard Jaden Springer then drained a three on the next offensive possession to push the Tennessee lead back to double-digits.

“I thought Jaden (Springer) was good,” Barnes said. “Between them, they had seven turnovers — half of our turnovers. Five of them were Keon and two of them were Jaden. That is the biggest thing. We try to talk to them in practice. They are both too good of offensive players to turn the ball over the way they do.

“Defensively, I thought Jaden was good. Keon had his moments, too, but then he had some bad moments where he turned it over and panicked and threw it away again. Those guys will be fine because they are competitive. Those guys have been hurt from the shutdown more than anybody. They were getting in a pretty good groove, then they missed two weeks. They were affected by it more than anybody.”

Slow start for Pons and Fulkerson

The bad news for Tennessee is that it wasn’t one of Pons or Fulkerson’s better nights. The good news, however, is that the Vols just beat a solid Colorado team by nearly double-digits after having to shutdown its program for two weeks without Pons or Fulkerson impacting the game the way they’re capable of.

“Fulky had not practiced since Friday, so I wasn’t surprised that he wasn’t very good,” Barnes said. “I kept telling the coaches, and they said, ‘I hope you’re wrong.’ I do think he responded at the end of the game and came up with a couple of plays.

“Yves struggled. He’s a senior and he shouldn’t ever be tentative out there shooting the ball and he was a few times. (He did do a) great job of rebounding the ball.”

Fulkerson finish with a team-high 11 points, but it wasn’t an efficient night. He was 4-of-10 shooting and sat on the bench in foul trouble for a good chunk of the game. He had just three rebounds.

Pons grabbed 10 rebounds, but he scored two points on just 1-of-9 shooting from the floor.

Tennessee now turns its attention to Cincinatti. The Vols will welcome the Bearcats to town on Saturday at 12:30 p.m. ET.