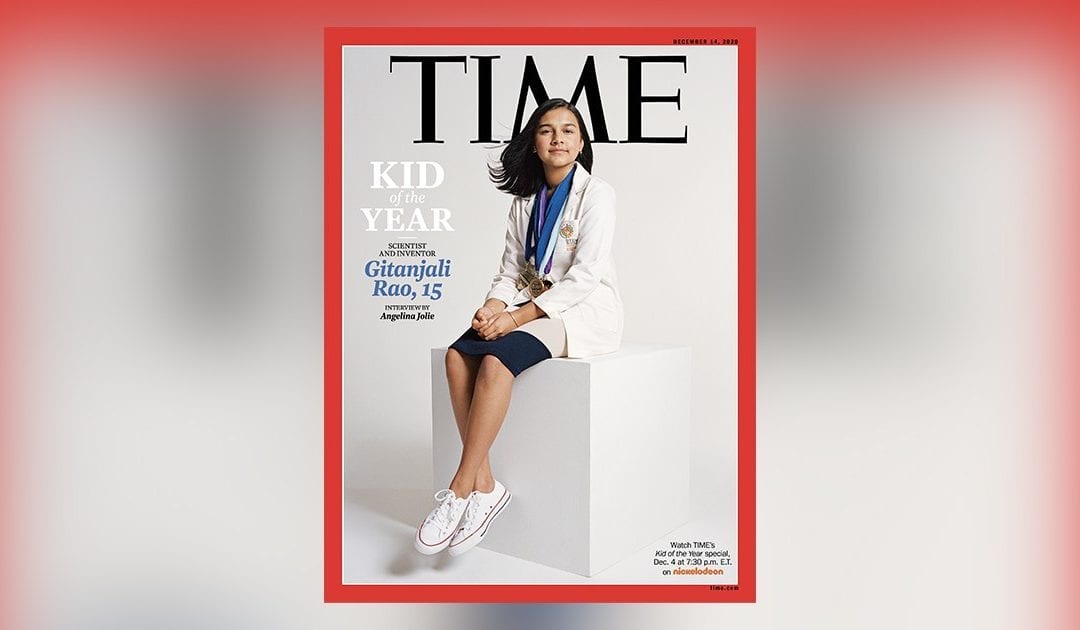 There aren’t many 15-year-olds who make it on the cover of Time magazine, have their own Wikipedia page and get interviewed by global superstar Angelina Jolie.

Then again, there aren’t many 15-year-olds like Gitanjali Rao.

This month, Gitanjali was named the first-ever Time Kid of the Year after a nationwide search involving more than 5,000 kids, each with their own awe-inspiring story. Gitanjali was honored for her work using STEM skills to address issues like bullying, opioid addiction and contaminated drinking water.

It’s also a major victory for STEM Scouts, the BSA program that empowers young people to gain hands-on experience in science, technology, engineering and math. Gitanjali joined STEM Scouts five years ago and tells Bryan on Scouting that the program helped her sharpen the scientific, leadership and teamwork skills needed to make strides that make headlines.

So transformative was her time in STEM Scouts that Gitanjali chose to wear a STEM Scouts lab coat, the program’s official uniform, on the cover of Time.

“Hands-on learning and problem-based methods were a significant part of the innovation process, and all of these were introduced in STEM Scouts,” Gitanjali says. “I also had the opportunity to conduct sessions for elementary students that helped me gain confidence in my own ability to share my knowledge.”

We caught up with Gitanjali — a member of the BSA’s Denver Area Council — to learn more about the Time Kid of the Year honor, which included a chance to get interviewed by Jolie, the Oscar-winning actress and humanitarian.

Gitanjali, the Report to the Nation delegate

This is hardly the first time Gitanjali has made national news.

In 2018, she was one of 12 young people selected to travel to Washington, D.C., to present the 2017 Report to the Nation — a recap of the BSA’s accomplishments over the previous year.

Gitanjali was selected in part because she won the Discovery Education 3M Young Scientist Challenge for her invention that quickly and cheaply measured the level of lead in drinking water.

I was able to join the delegates in D.C. and was impressed by Gitanjali’s limitless curiosity. During stops at the U.S. Capitol, NASA’s Goddard Space Flight Center and the Smithsonian National Museum of Natural History, Gitanjali asked thoughtful questions and showed confidence when speaking to adults — another skill young people develop in Scouting.

Speaking to congressional leaders is one thing. Speaking to an international celebrity known both for her work in films and her humanitarian efforts to help refugees is something else entirely.

Angelina Jolie, a contributing editor for Time, interviewed Gitanjali for the cover story, which is available online now and appears in the Dec. 14, 2020, print issue.

Jolie and Gitanjali met over Zoom and talked for about an hour, Gitanjali says.

“It was a great honor to be interviewed by Ms. Jolie,” Gitanjali says. “I was a fan of her humanitarian efforts before I met her, and Maleficent is one of my favorite movies.”

Gitanjali says she’s even been to the temple in Siem Reap, Cambodia, where Jolie filmed Lara Croft: Tomb Raider.

The interview covers a range of subjects, but one of my favorite sections was their discussion about the need for more women in science fields.

“It’s so exciting to have such a forward-­thinking young, and female, inventor,” Jolie says. “Does that affect you in any way? It’s surprising because I think of women as being brilliant, but there are so few women in the science and tech fields.”

“I don’t look like your typical scientist,” Gitanjali responds. “From personal experience, it’s not easy when you don’t see anyone else like you. So I really want to put out that message: If I can do it, you can do it, and anyone can do it.”

Be sure to read the full interview for more inspiring insight from this amazing STEM Scout.

Gitanjali and the future

Gitanjali tells Bryan on Scouting that it’s critical for young people to have supportive adults in their life who can introduce them to STEM fields.

“Science and innovation are part of our future, and our generation needs to be introduced to it earlier,” she says. “I am fortunate to have gotten support from my mentors at an early age for some of my innovations. I feel a sense of moral responsibility to share that.”

But Gitanjali knows that more must be done, especially in developing countries and underserved areas in the U.S., to introduce STEM topics to kids.

That’s why over her winter break, Gitanjali will hold live video sessions with a girls’ school in Afghanistan, a school in Ghana, several schools in India and one rural school in Colorado.

Incorporating lessons from her book (yes, she’s a published author, too), Gitanjali hopes to do more than merely teach what she knows about STEM. She wants to give students and teachers the power to discover STEM for themselves. (In other words, she’ll teach them how to fish instead of doing the fishing for them.)

For this 15-year-old with her own Wikipedia page, these honors are only the beginning.

She wants to continue participating in STEM Scouts while conducting research, making innovative breakthroughs and unlocking doors to make STEM more accessible to all.

“I believe the recognitions are just another opportunity to amplify the message of innovation and the need to incorporate innovation in our traditional education,” she says. “This is also a way to welcome and solicit more innovators by making a community of young innovators in our society.”

If learning about this 15-year-old STEM Scout leaves you feeling optimistic about the future of our planet, you’re in good company.

“I’m just so happy to get to know you a little bit,” Jolie says in Time. “I’m sure I’ll be using your inventions in years to come and just being in awe of you as I watch you do more and more in your life, and I can say, ‘I met her once.’”