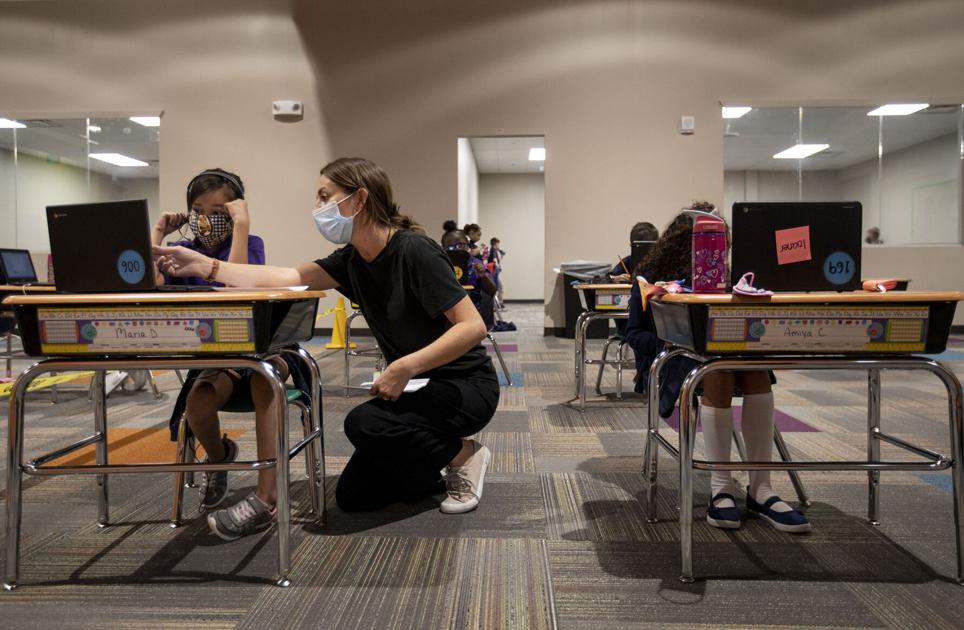 Sitting at a desk that replaced picnic-style tables in the lunchroom of Coperni 3, a public charter school in Colorado Springs, Amira Young-Flora, 10, polished off her bean burrito and banana lunch Thursday and had time to lean over and chat with a classmate 6 feet away.

“I’m glad to be back at school because I get to see all my friends and my teachers,” she said. “It’s fun, but it’s kind of not fun because you have to wear masks.”

But it’s better than online learning at home, Amira said, echoing the thought of the majority of families enrolled at the school.

Coperni 3 and Coperni 2 are the first schools in the Pikes Peak region to resume in-person classes, after schools were shut down in March because of the coronavirus pandemic

The two Colorado Springs schools, along with a K-8 system in Aurora and a new school in Midland Texas make up the Third Future charter school network founded and led by former Harrison School District 2 Superintendent Mike Miles. All opened on their start dates set last year.

The rest of the kindergarten through seventh-grade students began the 2020-21 school year Wednesday at the 1-year-old school that occupies 65,000 square feet of the former Macy’s department store at The Citadel mall.

El Paso County Public Health recommended on July 22 that schools not reopen until Aug. 17 at the earliest, to allow more time for Colorado Gov. Jared Polis’ mask mandate to have an effect on rising COVID-19 infection rates.

Some local districts have pushed back start dates and are switching to an online, not in-person, format for fall. Others are bringing back younger students later this month but not older students, and some are doing combined in-person and online learning.

Miles said his schools stuck to the original schedule because he’s confident in the network’s protective health procedures.

“We have a model where we can keep kids separate and a solution that provides safety for students and adults,” he said. “We’ve shown parents we can be safe, and if a school can be safe, parents certainly want their children in school.”

A six-week summer school program for students needing to catch up and those wanting to accelerate learning served as “a practice run that gave us a playbook for fall,” Freehling said.

“There was no coronavirus spread,” Miles said.

One student among the network’s 200 summer school students was presumed to have the virus, he said, although that was not confirmed. Nevertheless, the child’s cohort, or small group, stayed home and did online instruction for 14 days as a precaution, Miles said.

At Coperni 3, the floors are marked with yellow tape for students to remain 6 feet apart when moving about, which is when masks are required for kindergarten through middle school students and staff.

There are a maximum of 10 desks, spaced 6 feet apart, in instruction areas. Yellow cautionary tape separates groups of students.

Bathroom visits are orchestrated in small groups, with children escorted by an adult.

Students’ temperature is checked before they get out of the car when pulling up in the morning as early as 6:30 a.m. and before they enter the lunchroom at midday.

Students remain at their desks until their parents arrive at the end of the school day at 4:30 p.m.

Shakir Mitchell, whose son is a first-grader at Coperni 3, said he thinks the rules are “about the safest you can get,” adding that he’s “pretty satisfied” with the procedures.

“I like that they switch off from classroom to overflow rooms, and you don’t have a classroom full of kids,” he said.

Mitchell said he reminds his son to keep washing his hands often and wear his mask when he’s moving about.

“Both of us parents work, and we like that there’s before and after school care,” he said.

Enrollment is up by about 100 students this week over the same time last year, Freehling said. He attributes the growth to classes resuming when other schools are still deciding or delaying in-person learning.

“We’re in education because we want to interact with kids,” Freehling said. “In order to do that, face-to-face instruction is the best way because that’s where we’re going to get our best academic growth.”

Third Future schools focus on closing the achievement gap for low-income, underachieving students, he said, using individualized instruction that meets students at their own level and pace and increases their performance in a targeted manner.

But families who have at-risk children or adults or who are worried about returning can have their children simultaneously follow along and participate in live classroom instruction via video chat at home on a school-supplied electronic device.

Each teacher is equipped with about $300 worth of technology that includes a camera in the classroom, a microphone, speakers and a large screen on which other students and the teacher can see and interact — whether they are at home, in a classroom or in overflow areas such as a gym, cafeteria or multipurpose room.

“If a parent decides they want their child in school and wants to take that risk, they should have that option,” he said. “This is an opportunity for parents to be in control of their children’s education.”