Fire leads to evacuations in southwest Colorado near Mancos 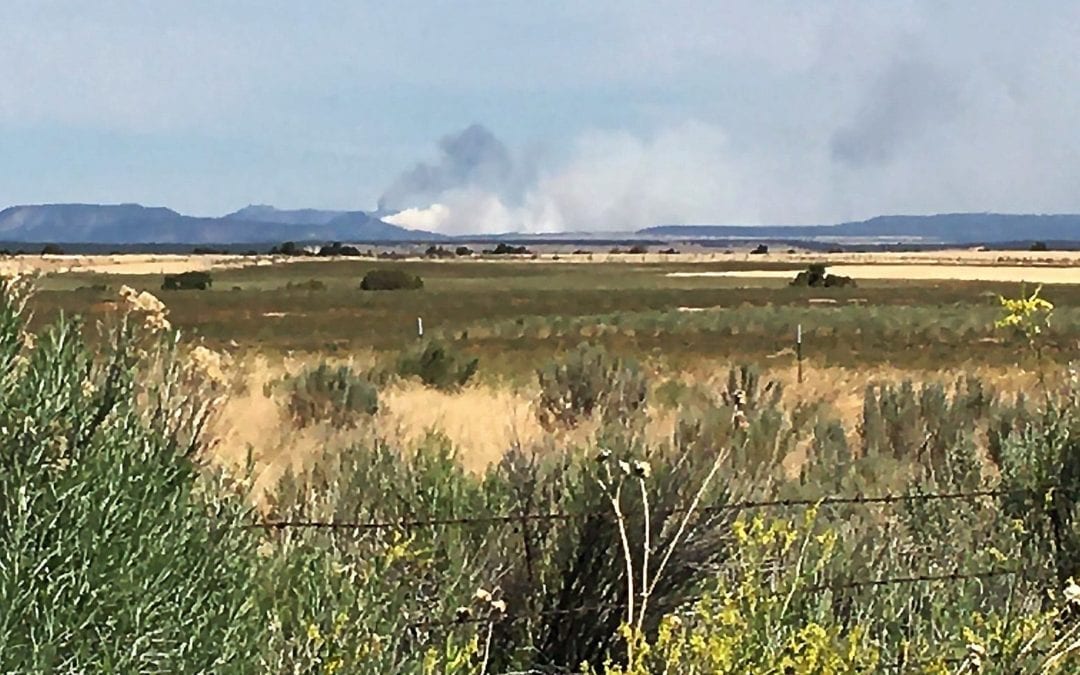 UPDATE:  By about 8:30 p.m. on June 15 the East Canyon Fire near Mancos, Colorado, had grown to 2,703 acres and was at 0 percent containment, according to the evening update posted online via the Inciweb fire information website.

The fire is burning on federal Bureau of Land Management land east of Menefee Mountain near Mancos, Colorado. There are 100 personnel fighting the lightning-sparked blaze that began the afternoon of June 14 in fuels that include pinon, juniper and gambel oak.

At 6 p.m. account of the day’s firefighting described an effort that had firefighters advancing when they could and falling back at other times.

“The fire gained momentum in the early afternoon and made a significant push north towards Highway 160, prompting the closure of Highway 160 around 3:30 p.m.,” the update stated. “At this time, fire activity has slowed and the State Patrol will be reopening the highway.”

The fire is about 1 mile south of the highway and hadn’t jumped to the north side by the time of the update.

“There were several spot fires across County Road 105 (Cherry Creek Rd); firefighters were able to extinguish all of them,” officials stated. “No structures have been damaged or lost.”

“The decision to go (with a Type 2 fire team) is due to the complexity of the fire, rugged terrain, and the number of aerial resources,” the update said. “Their arrival will also free up the Durango Team to deal with new fire starts.”

Drones are strictly forbidden in the area of the fire, as a Temporary Flight Restriction order is in effect for 10 miles around the perimeter of the blaze, where a lot of firefighters and aerial resources will be deployed and the steep terrain necessitates an attack from the air.

“It is imperative that we don’t have to stand down our air resources because a drone is jeopardizing their air space,” said Connie Clementson, BLM Field Office Manager for the Tres Rios Field Office. “We appreciate the public’s assistance and patience during this effort.”

AZTEC — A fire that started over the weekend in the area of Menefee Mountain south of Mancos, Colorado, is estimated to have burned more than 1,000 acres. The last confirmed size was 895 acres as of 6:41 p.m. June 14.

The fire is being called the East Canyon Fire and has led to evacuations in the Elk Spring and Elk Stream subdivisions.

According to the Bureau of Land Management Southwest Colorado Fire and Aviation Unit, no structures have been damaged.

The fire is moving along the Cherry Creek side of Road 105 and crews are working to protect structures and communication towers, according to the BLM Southwest Colorado Fire and Aviation Unit.

According to the Durango Interagency Incident Management Team Type 3, the fire has burned 1,100 acres of both public and private land in Montezuma and La Plata counties.

The fire prompted officials to close U.S. Highway 160 at the east end of Mancos on June 15, according to a post on the Montezuma County Colorado Facebook page. The county is urging motorists to find alternative routes. The closure spans from Mancos to Hesperus, where U.S. Highway 160 meets Colorado Highway 140.

The National Weather Service has issued a Red Flag Warning for southwest Colorado for Monday, June 15 and Tuesday, June 16. A fire weather watch is also in effect. According to the Red Flag Warning, gusty winds and dry vegetation could lead to fires starting quickly and spreading rapidly.

The Colorado Department of Public Health and Environment has issued an air quality health advisory for much of southwest Colorado due to the smoke from the East Canyon Fire and another wildfire in southwest Colorado called the Loading Pen Fire. The advisory was issued on June 15 and will be in effect through 9 a.m. June 16.

Hannah Grover covers government for The Daily Times. She can be reached at 505-564-4652 or via email at hgrover@daily-times.com.