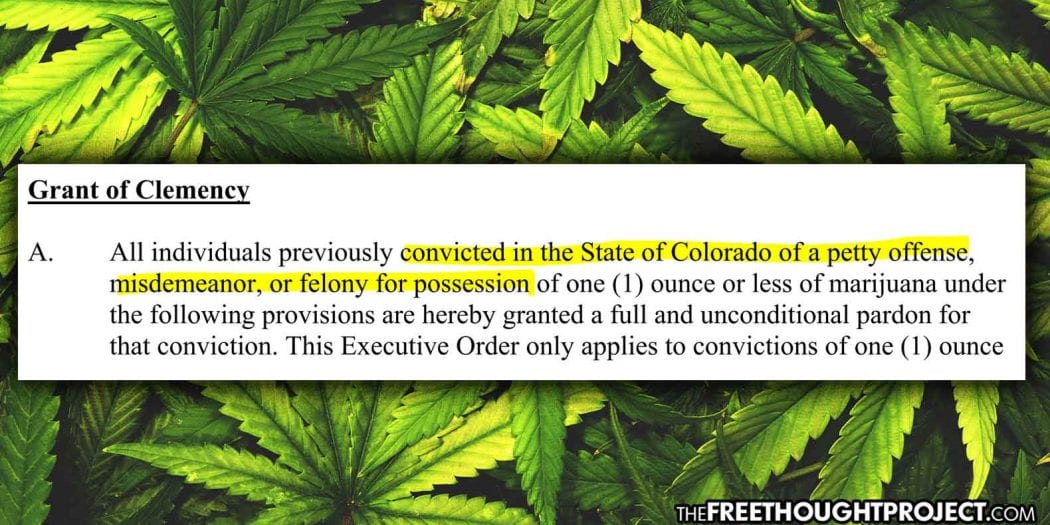 Colorado — Those members of government who are willing to challenge the status quo and stand against injustice are few and far between. Those members of government who not only stand against injustice but take action to reverse it are all but entirely mythical. Colorado Governor Jared Polis is not very mythical; however, he made a mythical move this week and signed an executive order Thursday which grants a full, unconditional pardon to everyone convicted of possession of an ounce or less of marijuana.

All individuals previously convicted in the State of Colorado of a petty offense, misdemeanor, or felony for possession of one (1) ounce or less of marijuana under the following provisions are hereby granted a full and unconditional pardon for that conviction. This Executive Order only applies to convictions of one (1) ounce or less of marijuana and no other charges or convictions are pardoned by this Executive Order.

“We are finally cleaning up some of the inequities of the past by pardoning 2,732 convictions for Coloradans who simply had an ounce of marijuana or less. It’s ridiculous how being written up for smoking a joint in the 1970’s has followed some Coloradans throughout their lives and gotten in the way of their success,” Polis said.

NORML Deputy Director Paul Armentano highlights the collateral consequences of a conviction, stating, “Thousands of citizens unduly carry the undue burden and stigmatization of a past conviction for behavior that is no longer considered to be a crime. Our sense of justice and our principles of fairness demand that officials move swiftly to right the past wrongs of cannabis prohibition and criminalization.”

Unlike other initiatives in states like Vermont and California, this is a sweeping pardon, meaning people do not have to apply for it. Those with state-level convictions as identified by the Colorado Bureau of Investigation are eligible for the pardon, and individuals do not need to submit an application in order to receive one.

The question most people are now asking is why the hell did this take so long? Colorado legalized marijuana in 2012. Why wasn’t this legislation passed then? Also, why stop at one ounce or less? Does possessing two ounces or more make you some kind of evil villain? Furthermore, why stop at marijuana? All drugs need to be legalized — now.

As states legalize marijuana at an ever-increasing rate, what was once illegal in many states is now legal. However, many governors thus far have failed to advocate for releasing those who are currently incarcerated for the plant nor pardoning those who’ve been released. The time to do this is now.

Unfortunately, the rational, logical, humane, cost-effective and peaceful solution to so many problems in the US today is to end the war on pot and all other drugs as well. However, no one who you will see on any televised debate stage will express a desire to end the war on drugs, much less the war on pot.

The special interests who line the pockets of politicians who perpetuate the war on drugs have far too much power.

Locking up drug users has proven to be quite the profitable venture.

It is much easier to walk out on the street corner and shakedown a teenager who may have an illegal plant in his pocket than it is to examine the evidence in a rape or murder case. The so-called “Private” Prisons know this and have subsequently found their niche in this immoral war on drugs.

The term Private Prison is a farce from the get-go.

A truly Private prison would not be solely funded by taxpayer dollars. These Private prisons are nothing more than a fascist mixture of state and corporate, completely dependent upon the extortion factor of the state, i.e., taxation, as a means of their corporate sustenance.

A truly Private prison would have a negative incentive to boost its population for the simple fact that it is particularly expensive to house inmates. On the contrary, these fascist, or more aptly corporatist, prisons contractually require occupancy rates of 95%-100%.

Become an Activist Post Patron for $1 per month at Patreon.

The requirement for a 95% occupancy rate creates a de facto demand for criminals. Think about that for a second; a need or demand for people to commit crimes is created by this corporatist arrangement. The implications associated with demanding people commit crimes are horrifying.

Creating a completely immoral demand for “criminals” leads to the situation in which we find ourselves today. People, who are otherwise entirely innocent, are labeled as criminals for their personal choices and thrown in cages. We are now witnessing a vicious cycle between law enforcement, who must create and arrest criminals, and the corporatist prison system that constantly demands more prisoners.

The police and prison corporations know that without the war on drugs, this windfall of money, cars, and houses — ceases to exist.

As more and more states refuse to kidnap and cage marijuana users, the drug war will continue to implode. We must be resilient in this fight.

If doing drugs bothers you, don’t do drugs. When you transition from holding an opinion to using government violence to enforce your personal preference, you become the bad guy. Don’t be the bad guy.