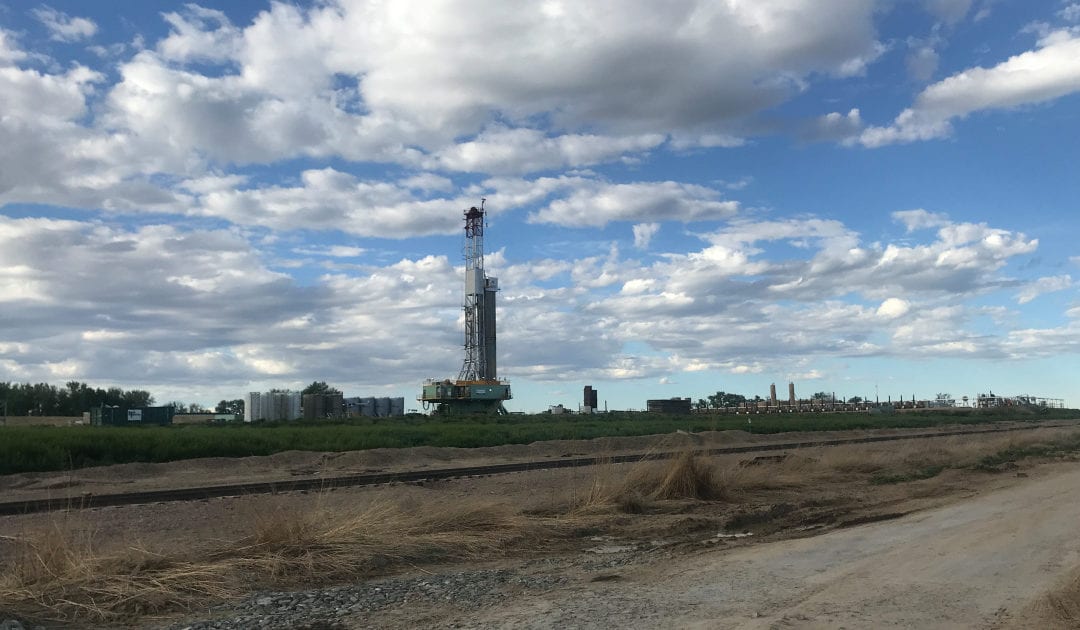 Colorado regulators have spent more than a year overhauling the state’s oil and gas drilling rules, but on Tuesday they face revising what both industry and environmentalists see as the make-or-break rule: setbacks of oil and gas operations from homes and schools.

“Setbacks will determine Gov. Jared Polis’ legacy on oil and gas and whether Senate Bill 181 was a success,” said Emily Gedeon, a Colorado Sierra Club spokeswoman. The 2019 legislation made protecting public health, safety and welfare the priority in permitting oil and gas development.

The industry position is that there is no science to show that the current Colorado Oil and Gas Conservation Commission 500-foot setback is inadequate to protect public health.

“It’s important that we draw a line between further regulations and proposals driven by those who simply don’t want this product to ever leave the ground,” Dan Haley, president of Colorado Oil and Gas Association, a trade group, said in an email.

Environmental and community groups counter that there is ample scientific evidence that a 2,000-foot or 2,500-foot buffer is needed, not only for health, but also for safety from explosions, fires and spills. Either of those setbacks would be crippling, oil and gas industry executives say.

The fight over setbacks has raged for more than eight years through an earlier rulemaking, in the legislature and three efforts at setback ballot initiatives, including a 2018 measure for a 2,500-foot setback that was defeated.

Now the battle comes to a new venue, the state’s first full-time oil and gas commission, whose five members are wading through the minutiae of science and safety to set a fair boundary.

The setback hearings, which began Friday, are emerging as a battle between dueling sciences – between toxicology and epidemiology.

Industry expert witnesses argue there are no known exposures of toxic emissions from oil and gas operations at levels that would cause serious health effects, while experts for community and environmental groups cite studies showing populations around oil and gas wells with poorer health outcomes than average.

“All of these parties can present information that is accurate with opposite conclusions,” Joel Minor, an assistant state attorney general, told the commission at the outset of the hearings.

Toxicology identifies harmful substances, the adverse health effects they cause (such as cancer or neurological damages) and the levels at which they are dangerous over the short-term and long-term.

This is usually done through controlled laboratory studies using animals such as rats and mice.

Tami McMullin, a toxicologist with the consulting firm CTECH and a COGA witness, noted that a 2017 review of existing air monitoring by the Colorado Department of Public Health and Environment found that of the more than 50 volatile organic compounds measured, all were below short- and long-term health effect levels.

Angela Zivkovich, a regulatory policy advisor for Occidental Petroleum Corp., Colorado’s largest oil and gas operator, said the company has taken 800 air samples at nine of its sites from 100 feet to 1,000 feet from wells.

Noble Energy and PDC Energy, also large operators in the state, have also taken hundreds of air samples, Zivkovich said, and in all three cases samples were below health-risk standards.

There has been controversy over the drilling of an 11-well pad 1,200 feet from the Bella Romero K-8 Academy in Greeley, but McMullin noted that, of 6,582 measurements made there, only one sample had a level of benzene – a known carcinogen – above the health standard.

On Nov. 5, 2019, the air outside the school, as students were leaving, registered 10.24 parts per billion of benzene. The federal health guideline is 9 ppb. Those guidelines are set far below safe levels, McMullin said.

No levels of toxins are reaching areas around oil and gas facilities at levels of concern for either short-term or long-term health effects, McMullin said. “There is no credible evidence for greater setback distances in order to protect public health,” she told the commission.

There are, however, limitations to this approach. Not every site can be monitored all the time (although some of the industry work did involve continuous monitoring) and there are potential health and nuisance impacts – such as eye and throat irritation – beyond the documented toxicological profiles of chemicals.

“It is difficult to measure cumulative impacts, also short-term issues such as headaches and nosebleeds,” Kristy Richardson, CDPHE’s state toxicologist, told the commission. “It is hard to understand whether a rat has a headache.”

A 2019 CDPHE study took documented emission rates of volatile chemicals from oil and gas sites, modeled how they disperse and concluded that in a worst-case scenario – peak emissions and the worst weather conditions – there could be acute, short-term health impacts 2,000 feet from the site.

“This is the best available science,” said Matt Sura, an attorney representing Conservation Colorado and Western Slope grassroots groups. The industry has challenged the CDPHE’s methodology.

Still, when Commissioner John Messner asked McMullin if her studies had been vetted – the epidemiological studies have been reviewed by independent experts before publication – McMullin said, “We use standardized risk assessment.”

While toxicology looks at chemical risk and exposure, epidemiology is looking at disease and health outcomes in the population and trying to identify risk factors. Establishing cigarettes as a cause of cancer was an epidemiological exercise.

The tools of epidemiology, however, were developed for clinical settings where groups of patients or subjects can be managed and followed, and researchers say that applying them to environmental settings is a challenge.

Efforts have been made, such as matching pregnant women and their newborns who live near oil and gas operations to a similar group, or cohort, who do not live close by, or trying to see the impact of oil and gas activity on asthma attacks.

In one study, researchers from the Colorado School of Public Health found that babies born to women in rural areas near oil and gas wells were 40% to 70% more likely to have congenital heart defects as those not near wells.

The study found no strong difference for newborns in urban areas between mothers living near wells and those living farther away. “It is possible that rural air quality near natural gas wells in Colorado is not as compromised as urban air quality,” the study said.

Studies in both Colorado and Pennsylvania found associations of lower birth weights in newborns with proximity to oil and gas wells. The Pennsylvania study said it was not clear whether there were health implications for the infants.

The asthma study in Pennsylvania – where there has been extensive gas drilling in the Marcellus Shale – documented an apparent increase in asthma attacks, but cautioned that there may be factors that vary from year to year not accounted for.

For a 2016 study by Colorado School of Public Health, researchers did blood pressure and blood tests on 97 adults in northeastern Colorado, and measured the results against proximity to oil and gas activity.

“We found an association,” Benjamin Blair, one of the researchers, told the commission, but he said they couldn’t definitely say it was a cause of high blood pressure or cardiovascular inflammation.

CDPHE and the Pennsylvania Department of Environmental Protection teamed up to do an evaluation of about 20 oil and gas epidemiological studies and ranked all but one “low certainty” due to limitations in the study design.

Citing the study, McMullin said that what was needed was “more high-quality epidemiological studies.”

“I realize the studies to date have many limitations,” said Commissioner Karin McGowan, who was formerly the CDPHE deputy executive director. “Because of the nature of oil and gas and because of the way we live … it is going to be very hard to show causation.”

“The decision we make is going to be the best we can do with the data we have,” McGowan said.

Mike Freeman, an Earthjustice attorney representing Sierra Club and other environmental groups in the hearing, said, “industry is trying to confuse the issue by saying we don’t know everything and ignoring the weight of the research.”

But noting that the 2018 setback initiative was defeated on a 57% to 43% statewide vote, COGA’s Haley said, “with fear as their only tool, and with no applicable science to support their claims, activists are pushing five governor appointees to overturn the will of the people.”

At Friday’s hearing, Katherine Merlin, an attorney with Colorado Environmental Advocates, told the commission, “If you are dealing with a battle of experts please listen to residents.”

Janis Butterfield – whose ranch near Berthoud, in unincorporated Weld County, is hemmed in by two drill sites, one 2,000 feet from her home and one 700 feet away – told the commission about months of unregulated releases from the site that left an oily residue on her hay and alfalfa, the horse water trough and the kiddie pool for her grandchildren.

Susan Speece, a spokeswoman for the Anthem Ranch Homeowners Association, in Broomfield, told the commission that she had had to cope with odors from a large, multiwell pad 1,260 feet from her home, but homeowners much farther from the site complained about headaches, nose bleeds and respiratory irritation.

So even if the science is debatable, Sura and Blair on Friday made a case to the commission that the setbacks were needed for safety and to curb nuisances.

Blair said there was a case where an explosion sent the top of a tank 500 feet and one in Texas, where an explosion created a 750-foot crater. Sura pointed to a 2015 lightning strike at a Greeley well pad that necessitated evacuating the surrounding area.

COGCC data showed that between 2006 and 2015, there were 116 fires or explosions that caused significant damage — almost one a month, Blair said.

Sura also said that noise and odors – two of the most common complaints from neighbors to well sites – are sharply reduced by distance. This is especially true of the large multi-well sites where drilling and fracking can go on for 18 months or more. “These large facilities have to be treated differently and set apart,” Sura said.

In its proposal to the commission, the COGCC staff said evidence supports the conclusion that there are health impacts from oil and gas development, but no evidence that clearly indicated an appropriate distance for a setback to protect public health.

The staff proposal calls for making the current 500-foot setback from a single home or occupied building in urban areas the statewide standard.

“A 2,000-foot setback was appropriate out of an abundance of caution, because of the unique sensitivity of children’s health,” the staff report said. “Children have developing respiratory systems that may be more sensitive to some pollutants.”

The rationale for the proposal was questioned by commissioners.

John Putnam, the CDPHE director of environmental programs, who is a nonvoting member of the commission, asked if the 10-dwelling trigger for the 1,500-foot setback was based on health density impacts.  Location analysis was the key driver, Putnam was told.

“How did this tiered system come to be?” Commissioner McGowan asked.

“We have a reasoning why there is a setback from a school,” she said. “I would argue that all those kids are going home at the end of the day — we would want them protected at their home and apartment.”