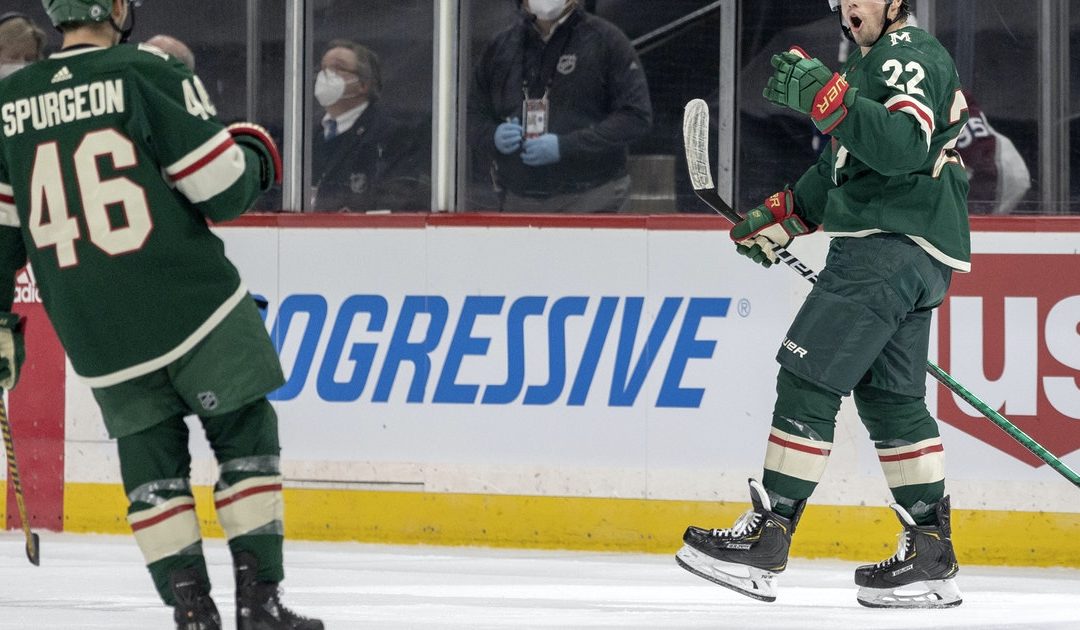 The Avalanche won the series but not before the Wild got in one last parting shot.

Almost half of the team’s regulation losses have come to Colorado, some more lopsided than others, but the Wild put the eight-game battle to bed Wednesday night in front of 3,000 at Xcel Energy Center by proving it can compete with the West Division leader – running away 8-3 to snap the Avalanche’s NHL-best 15-game point streak while tying the franchise record for most goals in a game.

This was Colorado’s first regulation loss since March 8.

The eight goals tied the Wild’s franchise record for a fifth time.

After a parade of penalties to kick off the first period, the Wild took advantage on its first power play when Kaprizov redirected in a Victor Rask pass at 4 minutes. The rookie has scored the Wild’s first goal in four of the last five games.

At 13:15, the Wild doubled its lead on Luke Johnson’s first NHL goal – a shot off the rush set up by Kyle Rau.

Before the period ended, Fiala went top shelf on Colorado goalie Philipp Grubauer to extend his point streak to seven games, the longest on the Wild this season. During that run, Fiala has four goals and six assists.

This was only the second time this season the Avalanche had surrendered three or more goals in the first period, but the Avalanche didn’t crumble.

Just 34 seconds into the second, Nathan MacKinnon scored on the power play.

Ryan Hartman answered back at 4:37 when he intercepted a Devon Toews pass and deposited the puck behind Grubauer. The goal was Hartman’s second in as many games.

Colorado, though, kept chipping away at its deficit.

Only 40 seconds after Hartman’s goal, Andre Burakovsky buried a loose puck in front behind goalie Cam Talbot. And then at 9:42, another power play goal – this one from Mikko Rantanen – made it 4-3.

But the Wild exited the second up by 2, and it had the once-maligned power play to thank for the cushion.

In all, the Wild has 12 power play goals over the past 15 games; the Avalanche finished 2-for-7.

In the third, Fiala added a sixth Wild goal at 4:24 on a strong individual – getting off a blistering shot while being hounded by the Avalanche’s Jacob MacDonald.

Joel Eriksson Ek made it 7-3 at 7:18 with his shot from the slot, and then Fiala capped off his first career hat trick on the power play at 7:56 – a celebration that included hats being thrown on the ice by the fans in attendance.

Rask assisted on the goal, his third of the game.

As for Kaprizov, he also assisted on Fiala’s final goal to wrap up a three-point night. He has nine points in his last eight games and continues to lead the Wild and NHL rookies in goals (16) and points (34).

Talbot ended up with 29 stops, while Grubauer made 11 before getting pulled after Eriksson Ek’s goal.

This was the fifth time the Wild has scored a franchise-high eight goals – on just 19 shots – and third time at Xcel Energy Center.