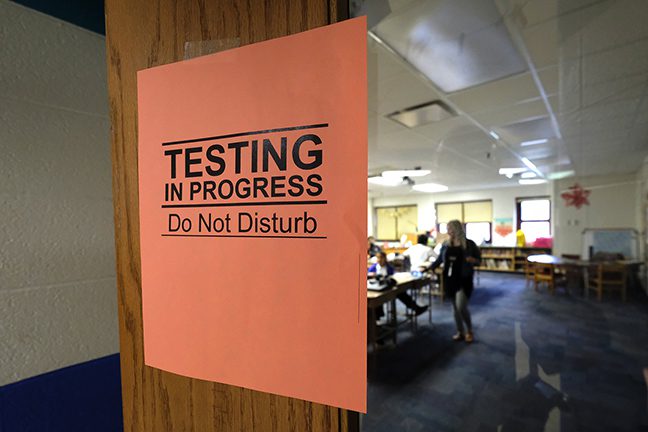 DENVER | Students in Aurora and across the state will take fewer standardized tests this spring after the federal government Friday approved the state’s plans to pare them down.

The federal waiver allows Colorado to cut science tests in all but eighth grade and all social studies tests. And students will be given either a math or a literacy test, depending on the grade. The exams won’t be used to evaluate teacher performance or rate schools. The waiver requires the results to be publicly reported.

Officials from both Aurora Public Schools and Cherry Creek School District joined most other school districts in asking for abbreviated standardized testing this year.

Colorado’s plan served as a test case to determine how far states can go in reducing testing loads, without running afoul of federal officials. Other state waiver requests will follow. The department’s guidance did not explicitly endorse reducing testing as Colorado proposed, but did say officials would work with states to balance testing challenges during the pandemic.

In granting the waiver, the department’s acting assistant secretary of education, Ian Rosenblum, said Colorado identified specific circumstances that made it impossible to administer the statewide assessment as usual.

To produce the waiver request, testing advocates and opponents compromised to pass a bill after just two weeks of debate. Opponents won scaled-back testing and supporters got the state to administer exams. Gov. Jared Polis signed the bill on March 16.

Colorado Commissioner of Education Katy Anthes said she believes the federal government saw the hard work and consensus from all sides.

“It’s kudos to Colorado and the way we do business because even when things are hard, and even when there are passionate views on all sides, we come together and we hash it through, and we come up with a compromise,” Anthes said.

Colorado students typically take math and literacy standardized tests in grades three through eight, as well as either a science or a social studies exam, depending on their grade level. The tests are known as the Colorado Measures of Academic Success or CMAS.

The waiver allows the state to test students in grades three, five, and seven in literacy and administer math tests to grades four, six, and eight. Parents would be able opt their children out of the exams. And parents also would have the opportunity to have their child take both math and literacy exams.

The federal government said Colorado will need to administer its English and mathematics assessment, the SAT, to high school students. And the Colorado Department of Education will be required to administer its general and alternate science assessments in grade eight and in high school, including for this year only, giving the SAT as its general science test, the letter said.

The science test wouldn’t have been administered in eighth grade under the state’s plan.

“It’s important to them (the U.S. Department of Education) that we had some elements of science, so we understand that,” Anthes said. “We compromised on not doing the whole battery of science.”

No other state approached cutting back 3-8 grade testing in this way. For example, experts said Massachusetts will give each student only half a test for both subjects and New York shortened its exams. States that asked the federal government to allow a halt to testing were denied.

Bill authors originally wanted to cut testing altogether. But both the Biden administration and Polis squashed that effort. Sponsors reworked the bill in the hopes it would limit testing but also meet the federal requirements.

Sen. Paul Lundeen, a Monument Republican, said during debate that the compromise bill was hard for everyone to stomach. But it provided “the best of both worlds.”

Andrew Ho, a professor and testing expert at the Harvard Graduate School of Education, said that its approach will show which schools are struggling more than they were two years ago. While policymakers would be able to see where help is needed most, parents would miss out on a more complete picture for their children.

He stressed that Colorado next will need to focus on responding to learning gaps identified by testing.

Anthes agreed that the state will need to target specific support for students falling behind, including using federal stimulus money to help students.

“We don’t know how to react if we don’t have information,” Anthes said. “And so this is just the first step in understanding what the impacts of the pandemic have created.”