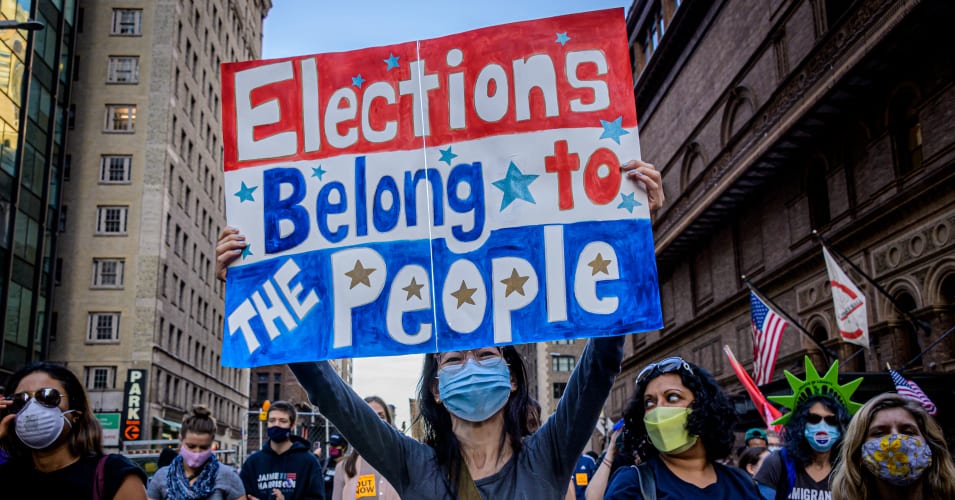 With President-elect Joe Biden on track as of Monday to win the national popular vote by a historic margin—more than eight million votes, according to one estimate—progressives are renewing their longstanding demand that the antiquated and undemocratic Electoral College be abolished in favor of a system that adheres to the principle of “one person, one vote.”

“It’s far past time that we abolish this system and affirm that every single vote should matter equally when electing our president.”
—Sean Eldridge, Stand Up America

Opponents of the popular vote effort in Colorado gathered the required number of signatures earlier this year to force a referendum on whether the legislature’s move would be upheld or repealed; the state’s voters opted to approve the compact last week by a margin of 52% to 48%.

“For far too long, the United States has failed to live up the ideal that one person equals one vote because of arcane institutions like the Electoral College,” said Sean Eldridge, founder and president of Stand Up America. “Our nation spent a stressful four days wondering who our next president would be, despite the clear fact that Joe Biden won the popular vote by millions—and with good reason. In the last 20 years, two out of three U.S. presidents were elected in spite of losing the national popular vote.”

“It’s far past time that we abolish this system and affirm that every single vote should matter equally when electing our president,” Eldridge continued. “In passing Proposition 113, Colorado voters helped the entire country move closer to ensuring that every vote counts equally in every state and every election.”

With Colorado’s passage of Prop 113, the popular vote compact has been approved by states with a combined total of 196 electoral votes. As Vox‘s Ian Millhiser explained last week, “The core insight of the National Popular Vote Compact is that, if a bloc of states that controls 270 electoral votes all agree to assign their electors to whoever wins the national popular vote, rather than the candidate who wins their state, then whoever wins the national popular vote will become president in every election.”

In a tweet on Sunday, just 24 hours after media outlets declared Biden the winner of the presidential election, Sen. Bernie Sanders noted that “the Democratic nominee for president has now won the popular vote in seven out of the last eight elections.”

At the time the election was called for Biden on Saturday, the former vice president led incumbent President Donald Trump by more than four million votes—significantly more than Hillary Clinton’s 2.8 million popular-vote margin in 2016.

“One person, one vote. Democracy must rule,” Sanders wrote. “Yes. We should abolish the Electoral College.”