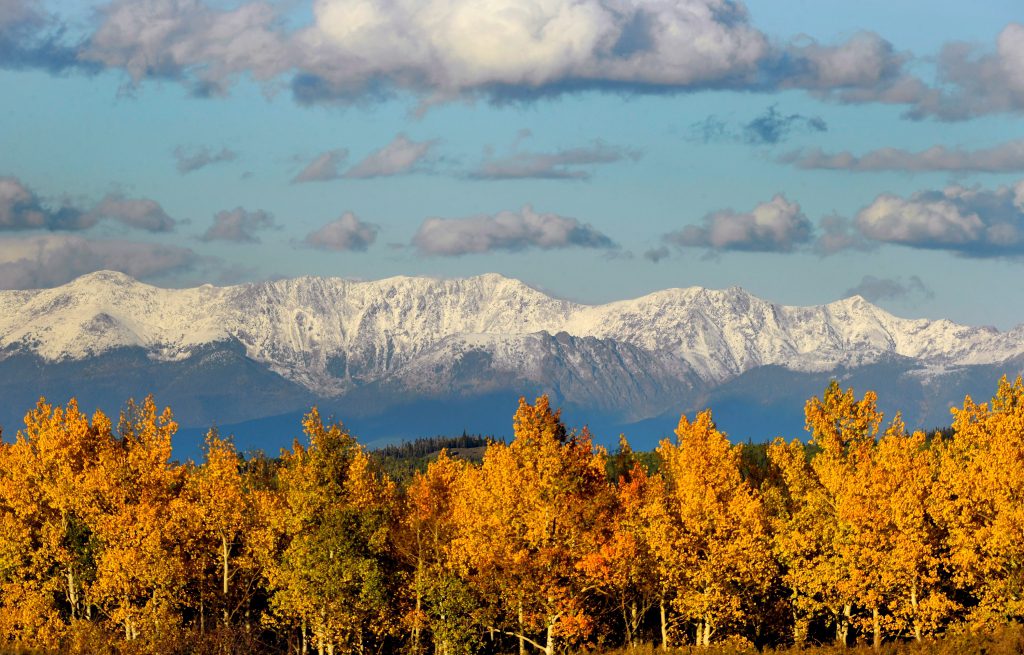 If you’re looking for a peak experience when it comes to fall foliage, the time to visit your favorite leaf-peeping spot in northern Colorado may come this weekend.

“Probably this whole next week will be our peak colors,” said Matamales, director of food and beverage at the Grand Elk Golf Club in Granby. “There’s not much green left. There’s a lot of yellow, and this year we’re seeing a lot more orange and red.”

Because overnight temperatures have been chilly lately, Matamales believes the peak may be short-lived this year.

“This is probably the last really good week before everything starts falling off the trees, would be my guess,” said Matamales, a 16-year resident of the area.

Photos taken on Buffalo Pass near Steamboat Springs on Wednesday show a riot of yellow, but a few aspen still have light green leaves.

“I would definitely say through this week, the weekend and early next week you’ll start to see the peak here for sure,” Lalive said.

Like many mountain locations in the northern part of the state, Steamboat got a dusting of snow Monday morning, with the upper portions of the Steamboat ski area receiving 3-4 inches.

Fall colors in the Steamboat area — including the ferns along this mountain biking trail — are really starting to pop. Caroline Lalive, a 26-year resident of Steamboat Springs, predicts the peak of fall color there will come early next week. The bike rider is her husband, former Olympic skier Nelson Carmichael, the 1992 bronze medalist in moguls. Lalive was an Olympic alpine racer.

“You look up and see the aspens changing, and with that bit of snow, that’s always such a beautiful contrast,” said Lalive, who has lived in Steamboat for 26 years. “Up high there’s some nice troves of aspens changing, and the undergrowth — the ferns and scrub oak and all of that — is definitely changing. Those are always really cool because the scrub oaks are red and the aspens are yellow.”

At midweek in Vail, three locals we contacted agreed that aspen stands there were still about half green and half yellow. But Jen Mason, executive director of the Colorado Snowsports Museum and a lifelong Vail resident, suspects this weekend and next will be prime for leaf-peeping in that part of the state.

Members of a Rocky Mountain National Park Facebook group have been posting beautiful fall colors photos, with one woman describing her trip up Old Fall River Road last weekend as “spectacular,” but apparently the peak is a while off.

“We are seeing colors change at higher elevations, as well as lower elevations on the west side in and around Grand Lake,” said the park’s public affairs officer, Kyle Patterson, via email. “Always hard to predict the peak, due to the possibility of winds blowing the leaves away. Likely peak will be in a few weeks.”

Down in Estes Park, the owner of The Taffy Shop, Mark Igel, said the tree in front of his business is still green and that there is “nothing dramatic in Estes Park right now” in terms of fall colors. There is something pretty dramatic when it comes to another sign of fall, though: rambunctious elk.

“The elk are remarkable this year,” Igel said. “Those darn elk, the bulls are huge and they are right in plain sight for people to see. It’s crazy this year. They are not even trying to hide, they are everywhere. It’s a good year, if you want to see elk, to be in Estes Park. Usually they hide, but not this year.”

The renowned Flash of Gold mountain bike trail on Buffalo Pass near Steamboat Springs — named for the amazing fall foliage shows it offers annually — was near the peak of its glory on Wednesday.