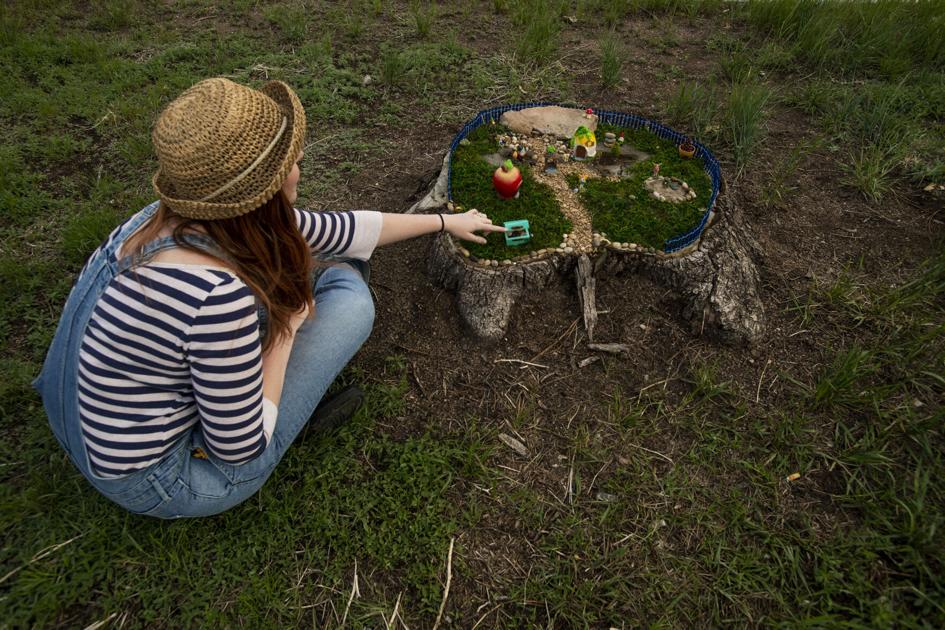 Lots of people walk right by it. But when someone notices it — that there’s something special about this tree stump — they’re known to stop in their tracks.

What they see is a whimsical little world inhabited by fairies and built on top of the tree stump. Surrounded by a blue fence, the scene includes sections of lush moss and rocks and a tiny pond for tiny toy fairies to explore. In the middle, there’s a path made of pebbles leading to a pavilion. If you look close, you’ll notice a few plastic and smaller-than-usual ladybugs perched on stones.

And all of this happening next to a sidewalk in front of Corina Hurst’s East Pikes Peak Avenue house.

Since her house is across the street from Memorial Park, a decent amount of walkers or runners or bikers go by Holt’s house any given day. But she rarely knows if they see her tree stump creation, what is known as a fairy garden. She only found out once because someone appeared to step on the garden and destroy some of its little pieces.

“I knew that might happen because there’s so much foot traffic,” Hurst, 27, said. “But it’s worth it to me if someone notices it and it makes them smile.”

Though it might not seem so to those unacquainted with fairy gardens, she says she purposefully kept her garden understated.

“It makes it more special that it’s not so over the top,” she said. “Otherwise, it wouldn’t have that same secret nature.”

Fairy gardens such as hers have a habit of being hidden in plain sight.

“I love that it makes you closer at something incredible that’s already there,” she said. “They can bring people’s attention to something even if they’re not interested in nature.”

Kelli Holt has learned this after a decade of making fairy gardens and teaching others how to make them through summertime workshops. On a Facebook page for her “Fairy Garden Fun” workshops, Holt promises that “with just a few small plants, a pebble stone path, a pond and miniature finds, you can make your own magical garden.”

It started when her twin girls were 8 and spent a couple weeks with their grandma in Montana.

“I just remember it being like, ‘What should we do to keep the girls busy for two weeks?’” Holt said. “That’s one of the things they came up with.”

They came back to Colorado with fairy gardens built out of twigs and Popsicle sticks. They spent the rest of the summer growing their gardens, adding intricacies like tiny letters in tiny mail boxes.

“It brought them so much joy,” Holt said. “You could just see their eyes light up.”

The family wanted to spread the joy, so they started hosting workshops about six years ago. After taking 2020 off because of the pandemic, the classes will return this summer at coffee shops, farmers markets and other locations around Colorado Springs.

Those taking the class can build their fairy garden out of material like succulents, colored stones and gravels and moss as well as fairy-related props. Holt also provides containers or pots for a base.

“You can make it however you want,” she said. “It’s kind of like interior decorating.”

Part of the allure, Holt says, is that the activity mixes a sense of gardening and creativity.

“It’s not as much about the plants,” she said. “It’s all about that magical imagination of it. And you’re still getting your hands dirty.”

It draws people of all-ages, from 3-year-olds to 80-year-olds. Holt says the creative process brings joy to all.

“No matter your age, that fairy-tale imagination that comes back to us,” she said.

Herself included. Holt keeps one of her own two-story fairy gardens in her living room for decoration. And for a daily jolt of happiness.

“When people come over, they’re like, ‘Oh my gosh, look at this,’” she said. “There’s excitement that comes with it.”

And for more elaborate masterpieces like hers, there’s always some new detail to notice. Like how the entry gates actually open or how one of the stones says “peace” or a cat hiding underneath a chair.

“There are so many little hidden treasures,” Holt said. “You just have to look for them.”

“They make you take a second look at something,” she said.

She had to take a second look herself after the city cut down the tree in her front yard. All that was left was an ugly tree stump.

“For a long time, I didn’t know what to do with it,” she said. “I just saw it as something that ruins my yard.”

She decided to turn it into something not so ugly. Something for others to enjoy.

“I hope it really does bring a spark back that someone may have lost during this time,” she said.

“It’s just that little something that does that.”