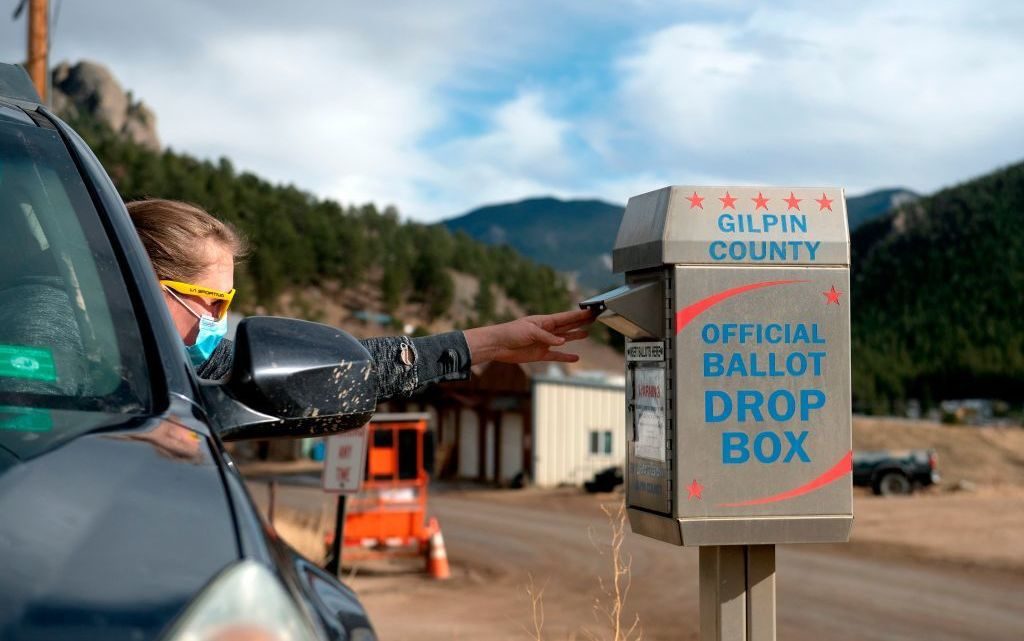 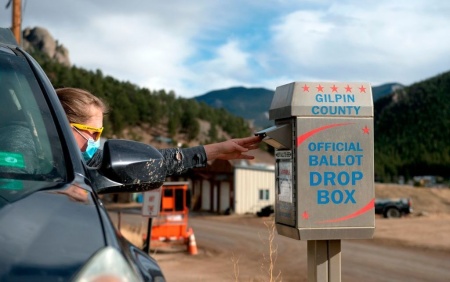 A voter drops off her ballot for the U.S. presidential election on Nov. 3, 2020, in Rollinsville, Colo. Colorado’s voting laws got fresh attention this week after the MLB decided to move its All-Star game to the state to protest Georgia’s new legislation.; Credit: Jason Connolly/AFP via Getty Images

move the All-Star Game to Denver, it was a moment of celebration for many Colorado politicos.

MLB had pulled the game from Atlanta in response to criticism of Georgia’s new voting law. The choice of Coors Field as the new site was seen by Colorado lawmakers as another validation of Colorado’s reputation for having some of the nation’s most accessible and secure elections.

He and others pointed out that Georgia offers voters 17 days of in-person early voting, while Colorado has only 15 of those in-person days.

There’s a major difference between the states, though: Colorado votes by mail. Every registered voter receives a ballot about 15 to 20 days before the election. And instead of waiting in line at a polling station, the vast majority simply drop the ballot in a mailbox or a secure dropbox.

According to information from the secretary of state, 99.3% of Colorado primary voters used one of those methods last year.

Georgia’s new law moves the state away from Colorado’s vote-by-mail approach, pushing more voters to show up in person. For example, under the new law, Georgia elections officials can only mail out absentee applications to voters who individually request it, shutting down one approach to encouraging mail balloting. And voters will have a shorter window to ask for those ballots. (Georgia sent out absentee applications to millions of voters in the 2020 primary, even if they hadn’t requested it, to encourage absentee voting during the pandemic.)

The Georgia law also bans mobile voting centers, and it strictly limits the use of dropboxes. This is another area where Colorado is moving in the opposite direction. Colorado had one dropbox per 9,400 active registered voters for the last election, with the secretary of state boasting about adding scores of new locations in the past few years.

In Georgia, it’s capped at one box per 100,000 active registered voters. The metropolitan Atlanta area could see its number of dropboxes drop from 94 to 23, The New York Times reported. And, instead of being outdoors with 24-hour access, as many in Colorado are, the Georgia boxes must be inside government buildings and voting sites.

Meanwhile, Georgia’s law adds an additional Saturday of early voting, but it limits the hours of those early voting days to 7 a.m. to 7 p.m.

How the states’ ID requirements compare

Kemp and others also have said that Colorado requires photo identification to vote, which is false.

Colorado does require some form of ID when voters register for the first time, and whenever they vote in person. But the state accepts 16 different forms of identification. The options include common identification cards like a driver’s license, U.S. passport or government employee ID — but Colorado also accepts Medicare and Medicaid cards, college IDs, utility bills, bank statements and paychecks.

Colorado does not require identification for mail voting once a person is registered. Instead, the state mails a ballot to the person’s home, and then matches their signature against a database when the ballot is returned.

In contrast, Georgia allows only six forms of ID for in-person voting. And the state requires that voters provide a driver’s license number, a copy of a state identification card or a Social Security number each time they vote by mail.

Georgia does allow first-time voters to use documents such as utility bills, bank statements and government documents that show the person’s name and address as identification if they were not able to prove residency when they first applied to vote. But that option is only available for the person’s first time voting in the state.

Water and food for voters

The Georgia law’s limits on providing food and water near polling sites have become another focus for criticism. After the All-Star Game moved, viral tweets claimed that Colorado has the same restrictions, which is false.

In Georgia, the new law bans “any person” from distributing food or water within 150 feet of a polling place or within 25 feet of a voter standing in line at a polling place. In Colorado, the state says that “comfort teams” may provide food and water, as long as they don’t promote a political candidate or cause.

Colorado voters are also less likely to need sustenance while waiting to vote, since they rarely encounter lines. Georgia lawmakers have argued that poll workers can still set up water stations. They said the law was supposed to prevent campaigns from trying to influence voters with gifts.

A version of this story originally appeared .

This content is from Southern California Public Radio. View the original story at SCPR.org.