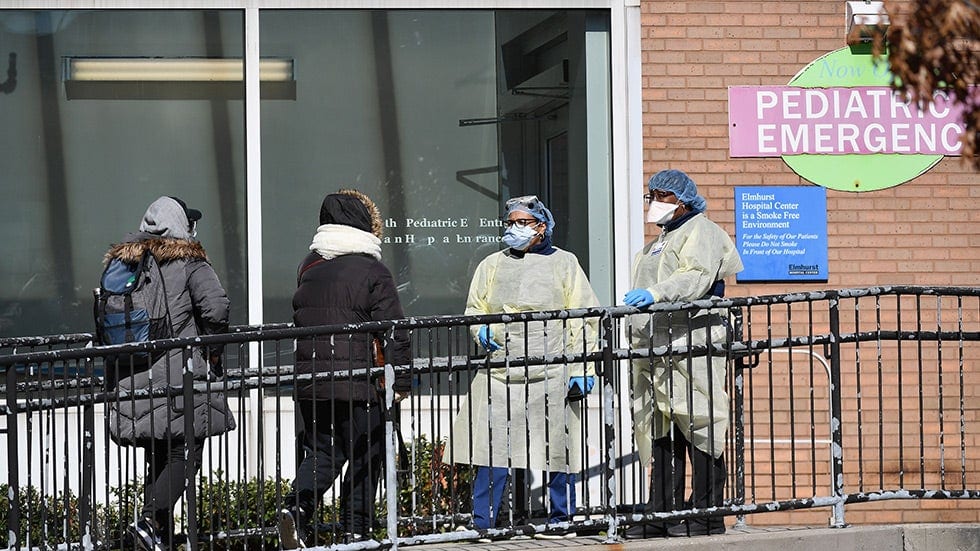 American health officials are deeply concerned that the coronavirus outbreak that has overwhelmed New York City hospitals in recent days is just the first in a wave of local outbreaks likely to strike cities across the country in the coming weeks.

In an exclusive interview, Dr. Anne Schuchat, the principal deputy director of the Centers for Disease Control and Prevention (CDC), said her agency is seeing early signs that the number of cases in other cities are already beginning to spike. While New York City is home to almost half the cases in the country at the moment, other cities are seeing their case counts rising at alarming rates.

“We’re looking at our flu syndromic data, our respiratory illness that presents at emergency departments. Across the country there’s a number of areas that are escalating. The numbers in New York are so large that they show up, but we’re looking at increases over time and we’re really seeing some in a number of places. It would be surprising to me based on what I’ve seen about how this virus spreads if it were not going to increase in many other parts of the country,” Schuchat said.

The CDC has deployed about 1,500 of its epidemiologists, scientists and experts to hot spots around the country, including the New York City area and Seattle, where the first American cases of the coronavirus emerged in January and early February. Now, Schuchat said, the CDC has dispatched teams to Louisiana, Wisconsin and Colorado, among others.

Schuchat declined to name the cities that are likely to become the epicenters of new and worrying outbreaks, but New Orleans has stood out in recent days for the rapid growth in cases it has seen. Louisiana reported its first case of coronavirus on March 9; it crossed 100 cases a week later. Its case count doubled between Sunday and Wednesday, when the state reported almost 1,800 cases.

Gov. John Bel Edwards (D) said Tuesday that the pace of growth in the number of confirmed cases in Louisiana was on par with countries like Italy and Spain, two of the hardest-hit nations in Europe where health systems have quickly become overwhelmed and doctors are having to make gut-wrenching decisions about rationing care.

Colorado reported nearly a thousand cases of the coronavirus on Thursday, twice as many as it had confirmed on Sunday. Wisconsin’s case load had grown from 385 on Sunday to 585 on Thursday.

Along with hard-hit New York, with some 30,000 confirmed cases, the epidemic is spreading more broadly. New Jersey has reported more than 4,400 cases. California, Michigan and Washington have all confirmed more than 2,000 cases, and Florida, Georgia, Illinois, Massachusetts and Pennsylvania had all recorded more than 1,000 cases, according to state health laboratories compiled by The COVID Tracking Project, a group led by the journalist Alexis Madrigal.

The CDC is using one of its most reliable indicators to provide early hints about where the next epidemics might spring up. A surveillance system designed to detect sudden upticks in patients who report flu-like symptoms at emergency rooms across the country, built over decades into a system that presents data in almost real time, was the first alarm bell that rang in New York. Those who reported flu-like symptoms, it turned out, were instead victims of COVID-19, the disease caused by the coronavirus.

Now, that same surveillance system is flashing red lights in many states, a potential sign that coronavirus patients are already visiting hospitals, even if their symptoms are not severe enough to warrant overnight stays.

“There’s just dozens of places we’re watching,” Schuchat said. “We really need to expect that the whole country’s at risk here, and we have to look across our health care system within each jurisdiction to have them be as strong as possible.”

Donald John TrumpNorth Korea asking for aid, while denying any coronavirus cases: report Iranian official maintains Tehran has ‘no knowledge’ of American hostage’s whereabouts Unemployment claims surge to 3.2 million as coronavirus devastates economy has suggested he wants to reopen the American economy and return to something approaching life as normal within the next few weeks, against the advice of medical experts both inside and outside his administration. Schuchat said ending the social distancing practices that have not yet begun to show an impact in slowing the spread of the virus would have devastating consequences.

“Everything that I’m seeing today suggests to me that we need to take this virus very seriously, and that we have to be absolutely sure that our health care system in diverse geographies is ready for increased burden, and that we have good systems to detect, track, isolate and reduce the spread of continued new cases. So I would be very reluctant to let up on measures in the nation as a whole. There are probably geographies where the virus hasn’t yet arrived in great force but where the health care system needs to be prepared for it,” Schuchat said.

“I think what we’re seeing in New York City and New York state right now is a real warning to other areas about what may happen or what may already be starting to happen, and these efforts to make sure that our health care system’s ready and that we can protect the most vulnerable before we ease up on the social measures that are in place,” she said. “The measures are meant to be used in a layered way, and it may be possible that selected ones might be eased up on. But as I talk to colleagues around the world who are facing different stages of this epidemic, I think we are all trying to make sure we have the very best information about how to ease up and also about how to minimize the unintended consequences, the negative consequences of the mitigation effort.”

The CDC was the first federal agency to sound serious alarms about the coronavirus as it spread, first from an epicenter in Wuhan, China, to other Asian nations and inevitably to the United States. The agency caught the Trump administration by surprise in February when one senior official warned in a media conference call of serious disruptions to American life. And the CDC’s director, Dr. Robert Redfield, has been absent at some of the White House briefings in recent days, raising questions about whether the most qualified and important public health institution in the world had been sidelined at a time of extreme crisis.

But Schuchat said the CDC remains at the core of the federal response, working alongside the Federal Emergency Management Agency as it stands up the National Response Coordinating Center. Redfield, she said, had returned to Atlanta for a few days to catch up with senior staffers.

“Dr. Redfield is on the White House task force and briefing pretty much nonstop. He had come back to Atlanta for a little time because we have a lot going on here and he was reconnecting with the staff, but he is back up in D.C. on full-time response mode,” Schuchat said. “We are very engaged in the response. Dr. Redfield is absolutely doing this full-time.”

She acknowledged that the response to the coronavirus has become tinged with politics in a way that other outbreaks have not, a function of a highly polarized moment in which even nonpartisan institutions get dragged into partisan squabbles. She said keeping the CDC apart from the fray is important for the country’s long-term health.

“I’ve worked for the CDC for 32 years now, and I’ve worked through every administration since 1988. Politicization is not helpful. This is a battle against a virus, and it’s a virus that we absolutely have to take seriously, and I think today that’s more evident than ever to politicians and to the public. CDC is a data-driven science-based organization serving the public and working with every administration that is there. It’s critical to me that the best science be brought to policymakers and that we remember that we’re all in this together,” Schuchat said.

Some public health experts have criticized the Trump administration — and even public health officials like Dr. Anthony Fauci, director of the National Institute for Allergy and Infectious Diseases — for downplaying the risk of the coronavirus as it spread in January and February. Schuchat instead pointed the finger at China, which she said had simultaneously contained the spread of the virus through an unprecedented lockdown and had not been completely transparent with information about the severity of the virus, information that might have spurred the United States to act more rapidly.

“It’s easy to look back and think about things that could be done differently. Were we completely aware of what was coming? But I think most of us are focused forward.

“My experience is that it’s really important to be humble when facing emerging infections and certainly when facing pandemics. Something that looks like the best idea can pan out differently than you expect, and things that you think are working well may not turn out to be. We feel like it’s very important to have an open mind, plan for diverse scenarios, plan for the worst and work backwards from that,” she said.

“The emergence in China and the intense response that they had was impressive, but also not as visible as we might have liked. But I can say other countries probably looking into the United States would probably want to understand in more detail what’s going on here. It can be hard when you’re responding to something like this to have all the information and to really know all the things you want.”