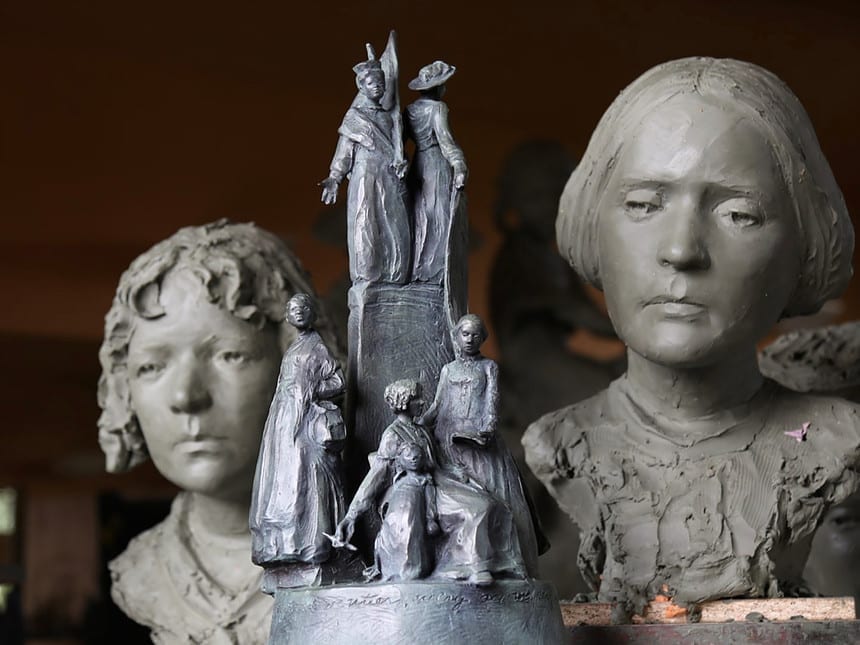 Ida B. Wells and Alice Paul stand atop a pedestal with a flag. Below them, sculpted from clay, stand first wave feminist icons Susan B. Anthony, Elizabeth Cady Stanton and Harriet Stanton Blatch. Wells holds out a hand, paying homage to the women who came before her. Concentric circles surround the sculpture, serving as a symbol for the ripples of change, just like a droplet falling into a pool of water.

When a water droplet falls, it ripples, of course, but a smaller, “daughter droplet” shoots up too. Wells and Paul represent the future, the daughters of those original waves of change created by Anthony, Stanton and Blatch. All five women send change outward into the world.

The sculpture was named after a passage from a letter Stanton wrote to fellow womens’ rights activist Lucretia Mott: “Every word we utter, every act we perform, waft unto innumerable circles, beyond.” Every Word We Utter, imagined and created by Loveland artist Jane Dedecker, could very well be standing as a monument in Washington, D.C. soon.

Dedecker, a member of the National Sculpture Society since 1998 and a Fellow since 2007, has been represented by the Claggett Rey Gallery in Edwards for more than 30 years. She is working with Congress to install Every Word We Utter in Washington, D.C. as a women’s monument.

“People that sacrifice and dedicate their lives to these causes… I just find it truly humbling and fascinating,” Dedecker said.

The bipartisan bill that would approve the installation, H.R. 473, was one of the first introduced by Colorado Rep. (D) Joe Neguse after he was sworn into office on Jan. 3, 2019. President Donald Trump tweeted on Friday, Aug. 14 he would sign the bill if passed by the House of Representatives and the Senate.

Dedecker considers this opportunity a career highlight, but more importantly, she’s proud that a women’s monument will likely be constructed in the nation’s capital.

“I do believe that we need a women’s monument in D.C. no matter who’s art or whatever it is,” she said. “If I do get the opportunity, oh my gosh, I will take on that honor.”

Individual towns can purchase smaller versions of Every Word We Utter to install in their own public spaces. More information can be found at claggettrey.com and by contacting the Claggett Rey Gallery.

The beginnings of Every Word We Utter started from competition entry: Dedecker applied to install a sculpture in Central Park. Though Dedecker didn’t get that job, she spoke with her friend, Jody Shadduck-McNally, who’s currently running for Larimer County Commissioner, ran for her district’s seat in the Coloardo House of Representatives in 2016 and has worked in Colorado politics. They both felt that it could work in D.C., and at a kickoff fundraiser for Neguse’s House of Representatives campaign in 2018, she spoke with him about Every Word We Utter.

Once Neguse was elected, he introduced the bill on Jan. 10, 2019: 101 years to the date after the women’s’ suffrage amendment bill was passed by two-thirds majority in the House of Representatives. H.R. 473 passed and was put on the Senate floor two weeks later, on the anniversary of Jeanette Rankin’s swearing in. She was elected as a representative for Montana, becoming the first woman to hold federal office. She introduced the original women’s suffrage bill.

An early project timeline hoped Every Word We Utter would be installed by Aug. 18, 2020, the Amendment to the Constitution was ratified.

Once the bill is passed, fundraising for the project begins. Donors can contribute by giving to the Every Word We Utter organization, which is working to install the sculpture in the capital. Donations can be made at ywordweutter.com. Under the donation tab, patrons can complete an online transaction or find the best address to mail a check.

As Dedecker reflects on the suffragette era, she notices a lot of parallels between then and now. Sculpting, she said, is a male-dominated field and even after 35-plus years as a career sculptor, she still gets paid less than some of her male counterparts. Even though her art is not about the money, she sees humanity facing some of the same issues back then as we do today.

“Even with the pandemic, the suffragists worked through the Spanish flu. Women’s rights movements are bubbling up again, with the #MeToo Movement,” she said. “We have to stay diligent and constant in our fight to rights. We’re the stewards of human rights. I see some of the focus back on human rights and human issues today.”

History and human rights motifs extend into her art because she feels inspired by the accomplishments early feminists and other activists made.

“It gives me strength. I hate to say validity, but it does a little bit. It validates the things we do,” she said. “By celebrating what these women have done, we value what we do today.”

She also acknowledges that though the standard narrative of American history focuses on the accomplishments of white women such as Susan B. Anthony and Elizabeth Cady Stanton, women of all racial backgrounds were fighting for the right to vote. She said current research, beyond what would have been recorded by whites at the time, has uncovered more stories of Black women like Wells, as well as Asian women, Hispanic/Latina women and Native American women.

“Can you imagine fighting for something, maybe not knowing if you would ever reap the benefits?” she said.

And that theme isn’t just limited to Every Word We Utter. Dedecker has also completed several public installations with historical ties, including: “Harriet Tubman” at the Clinton Library in Little Rock, Arkansas; “Emily Dickinson” at Converse College, in Spartanburg, South Carolina and “Amelia Earhart” at the Earhart Elementary School in Oakland, California.

Dedecker has created more than 175 public sculptures since the 1990s. They are in 33 states, and there’s one in Edwards at the Summit Habitats custom home construction building.

Her connection to the Vail Valley has spanned across the three decades she’s been represented by Claggett Rey Gallery, which recently relocated from Vail to Edwards. Maggie Dedecker Rey, the gallery owner, is Dedecker’s sister and used to manage her studio. She met owner and now-husband Bill Rey at the gallery, and continued supporting her sister’s art by including her as a gallery artist.

“He sort of stole my sister from me,” she joked. “But I’m so happy because she’s passionate about art and it’s a perfect thing for her to be doing. They understand my work intrinsically and you can’t beat that.”