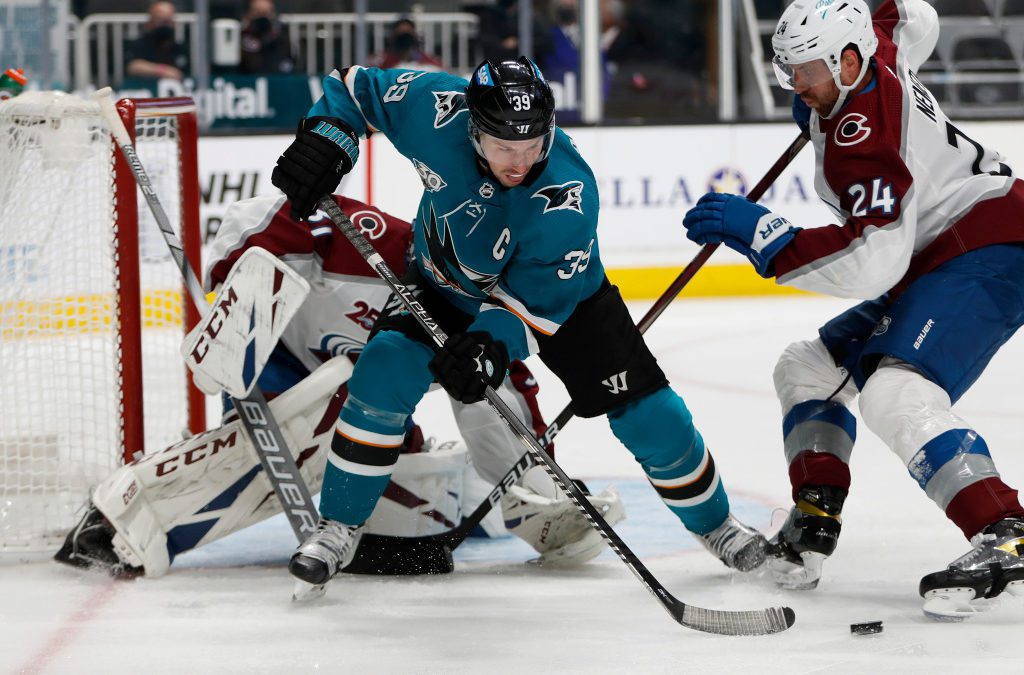 SAN JOSE – After losing twice by one goal to Colorado in recent days, the Sharks finally had a close game against the Avalanche go their way Wednesday night.

Erik Karlsson’s third-period power-play goal capped a Sharks’ comeback as they erased a two-goal deficit to earn a 3-2 win over the Avalanche at SAP Center.

Tomas Hertl had two goals and an assist and Evander Kane had three assists as the Sharks snapped a three-game losing streak. Colorado beat San Jose 4-3 on Saturday in Denver and 5-4 in overtime on Monday.

Josef Korenar finished with 30 saves to improve to 3-4-0 this season. The Avalanche, who led 2-1 after 40 minutes, came into Wednesday with a 27-0-1 record this season when leading after two periods.

The Sharks fell behind 2-0 as they allowed second period goals to Tyson Jost and Andre Burakovsky. Kane and Alexander Barabanov both assisted on Hertl’s first goal with 12.9 seconds left in the second period to cut the Avalanche’s lead to 2-1.

Hertl then scored again at the 2:50 mark of the third period to tie the game, and Karlsson scored on a one-timer from the circle to the right of Colorado goalie Philipp Grubauer with 10:42 left in regulation time.

The Sharks went 2-6-0 in their eight-game series with the Avalanche this season.

Hertl was playing in his 500th career NHL game Wednesday night. Although he has been hampered by serious injuries at times during his eight seasons in San Jose, Hertl is the eighth player from his draft class to reach the milestone. Hertl entered the NHL when he was 19 after was drafted 17th overall by the Sharks in 2012.

Hertl, who tested positive for the coronavirus in February and missed six games, came into Wednesday playing some of his best hockey of the season with four goals and five assists in his last seven games.

“I’ve liked his second half here,” Sharks coach Bob Boughner said. “He has gone through a lot in the last year-and-a-half with it with the injuries and 10 months off and then getting COVID.

“But I really like the way he’s responding in the second half and it is a nice milestone for him to hit. You can see when Tommy is feeling good and he’s healthy, how good of a player he is and how important he is to our team.

Before Wednesday’s game, Hertl was the Sharks’ leader with 27 points in 29 games since he returned from his bout with COVID-19 on March 12. Evander Kane was second with 25 points. Hertl had 11 points in his first 17 games.

“I don’t know why but I feel like it’s almost every year the second half is a little bit better for me,” Hertl said.

Hertl had a golden scoring chance in the first period, as linemate Alexander Barabanov set him up for a tap-in goal. But Hertl couldn’t get a stick on the pass as the score was 0-0 after 20 minutes.

The Sharks dressed some new faces for Wednesday’s game. Forwards Sasha Chmelevski and Alex True and defensemen Nicolas Meloche came into the lineup and Ryan Donato, John Leonard, and Christian Jaros came out. Donato had just two assists in his last 15 games since the start of April and Leonard has three assists in 15 games.