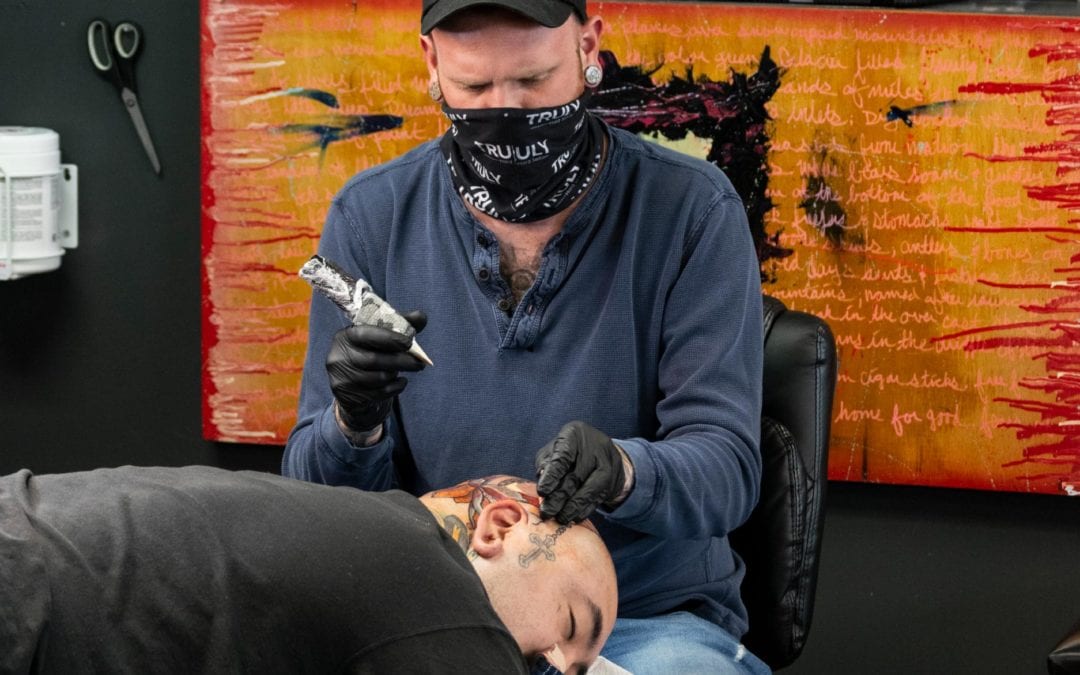 Every day, Fred Legarda makes detailed logs of interactions and symptom and temperature checks for customers and staff at Self Made Tattoo.

As the shop’s owner, he files it away with his daily paperwork and holds onto it in case the health department requests it.

When non-essential businesses were allowed to reopen after Colorado’s stay-at-home order expired in May, El Paso County Health detailed new safety protocols for each business type.

Self Made Tattoo falls under the personal services category, which is bound by new rules on social distancing and sanitation, and required to keep those detailed logs.

But no one’s come knocking on Legarda’s door to see if Self Made has complied. And unless there’s a valid complaint made about the business violating the state and county’s rules, it’s unlikely anyone will.

While regulation of business operations is part of what the health department does, Keith Siemsen, environmental health division director for El Paso County Public Health, said it’s not the agency’s main function.

“Our primary mission is not enforcement. Our primary mission is education and information and partnering with people and helping them be successful,” Siemsen said. “Oftentimes it’s in the context of helping them work through the regulations they have to meet in order to conduct their business, but our actual enforcement has been very, very minimal.”

When the health department receives a complaint of non-compliance, it kicks off a process of escalating enforcement that starts with officials evaluating the claim and, if warranted, reaching out to the business owner by phone to make sure they understand the public health order.

The department currently has 18 specialists charged with fielding these inquiries for every business throughout the county.

“Typically when we receive a complaint of perceived noncompliance, our specialist will reach out to that facility to attempt to provide education and see if there’s any ways that we can help that facility to come into compliance,” said Catherine McGarvy, the water quality program manager for El Paso County Public Health.

Because the initial evaluation of the complaint is done by phone and not in person, business owners essentially have to be taken at their word.

Repeat complaints often lead to a case being escalated.

If a business is still found to be non-compliant after being contacted by the health department and informed of their violation, a notice of determination is issued telling the business that they’re continuing to operate outside of the public heath order.

If they still don’t comply, the department issues a cease-and-desist letter stating the nature of their violation and informing them that further transgressions could result in civil enforcement or criminal prosecution. Violation of a local public health order is a misdemeanor punishable by a fine of up to $5,000 and imprisonment in the county jail for up to 18 months.

No fines, tickets or citations have been issued during either public health order — and Samantha Jo Lawson, the retail food program manager for the department, said those punitive measures are not within the department’s purview.

“We are not like Denver, so we do not issue citations on-site like Denver does,” Lawson said. “We fall under state statute requirements and we follow the guidance from the state, and Denver is not under the state so they get to use a different protocol than we use. That is not something we have the ability to do.”

Seeking to impose punitive measures would require involving other local or state agencies.

According to an April news release by Colorado Attorney General Phil Weiser’s office, local county attorneys or district attorneys can “bring any civil or criminal action requested by the local public health director for a local violation” of a public health order.

A county attorney representing a local public health agency can also seek a judge’s order in state court to force an individual or business to immediately comply.

Under state law, the Colorado Department of Public Health and Environment also has authority to enforce public health orders.

About 7 percent of inquiries have resulted in higher-level enforcement conversations and McGarvy said overall, less than 10 percent of complaints have required escalation.

As for the documents business owners like Legarda are expected to keep, Siemsen said it’s unlikely the health department will collect those anytime soon, barring complaints. But it’s still important — and mandatory — to keep them.

“We don’t have the bandwidth to track all that, but they are required to do it,” Siemsen said.

“If there’s a complaint or we have a legitimate reason to go out and look — say, there’s a documented outbreak for example — at that point we’d go out and look at their information and use it to help us track where [the virus] might have gone and who potentially could have been exposed.”

For Legarda, the health department’s new guidelines have been pretty easy to adjust to. He said many of his artists already preferred to wear masks before the pandemic, the shop already prioritized sanitization and cleanliness and the new rules haven’t really hindered business.

So sticking to the rules, he said, seems like a small price to pay to stay open during the crisis.

“If it’s going to make the difference between me working and not working, it’s an easy sacrifice,” he said.

El Paso County retail food establishments, which received one Colorado’s first variances for restaurants under the state’s public health order, are encouraged to collect the name and phone number of one adult in each party, as well as the table assignment, and the table’s seating and departure times.

The department encourages them to keep that information for 21 days.

Asked why the health department decided only to “encourage” restaurants to collect that information, rather than require it, Lawson said there was a vocal segment of the community that “didn’t feel comfortable with us requiring that to be captured.”

But she said collecting the information is important for possible contact tracing, should an outbreak be identified.

“If the restaurant decides they don’t want to capture that information and we do have an outbreak that’s traced back to that specific facility, the longer it takes us to figure out who exactly was exposed and what happened, and the longer that facility would potentially have to be closed,” Lawson said. “So it’s in their best interest to keep the documentation. And we would only take that information if absolutely necessary during an outbreak situation.”

Legarda said because the health department doesn’t have the manpower to go around checking every business in town, all local business owners should be personally accountable and make sure they comply with the rules in place to protect the public.

“They’re depending on us as citizens to do the right thing,” Legarda said. “So if you have a business, it’s your responsibility to make sure your clients are safe and that you can serve them.”