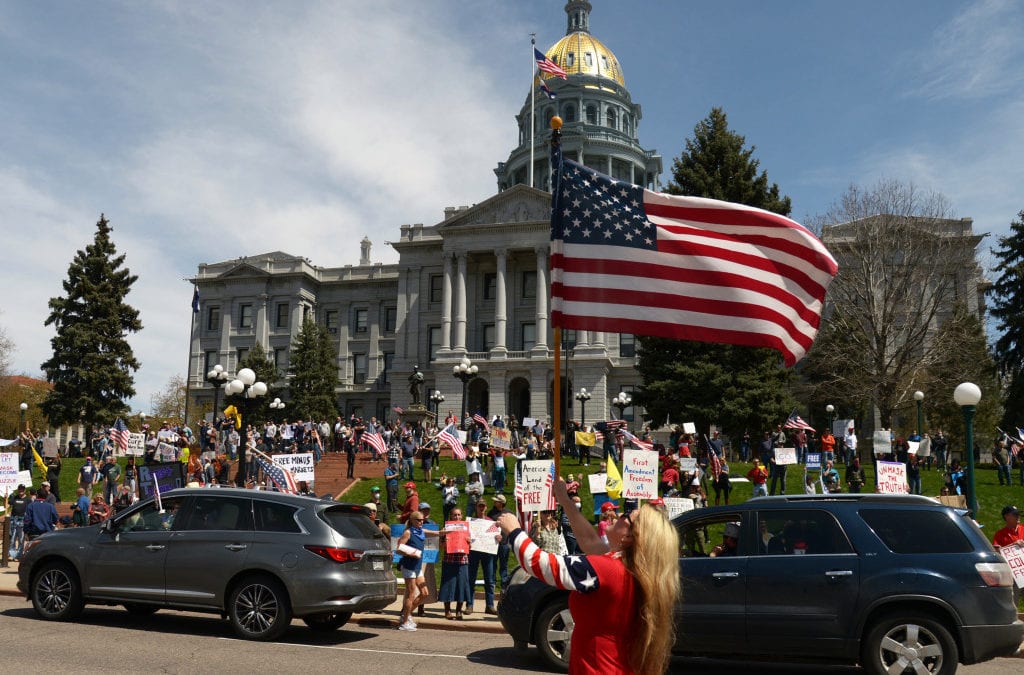 Joe Oltmann, of Castle Pines, is the 45-year-old CEO of a data company. He’s also a leader and financier in the nascent but growing movement of Coloradans demanding an end to stay-at-home orders.

“If I choose the wrong way and it ends up killing me, I’m sorry, but I made a choice. I took all the information that I did know and I made an educated choice affecting me, while at the same time respecting that other people deserve the right to feel safe,” he said in an interview over Zoom on Wednesday.

Impatient frustration at the state’s stay-at-home-order, which boiled over last weekend at a Capitol protest, simmered under the surface for much of April. But even beyond that protest, criticizing the government’s shutdown is becoming conventional wisdom among leading Colorado Republicans, and a rallying cry in a Democratic-led state.

As the order is set to expire Sunday and be replaced with a “safer-at-home” phase, Gov. Jared Polis says this shouldn’t be considered a grand reopening of the state. The process to lift restrictions is more gradual than anti-shutdown advocates prefer.

The chair of the Colorado Republican Party had suggested the governor’s stay-at-home order was “Marxist.” The top Republican in the Colorado House said it leads to a “Gestapo-like mentality” and attended a shutdown protest. A Republican fundraiser asked Coloradans to oppose the “Polis Police State.”

“Let’s get rolling and start undoing what we’ve done, getting people back to work and getting this country opened up again,” said Lou Vallario, the Republican sheriff of Garfield County, during a Facebook Live segment he called “Just the Facts” on Monday.

Colorado Republican lawmakers have questioned many of the restrictions throughout the stay-at-home order, and House Republicans sent the governor a letter on Monday urging that he switch from a statewide model to a county public health approach. The lawmakers said if Coloradans can figure out how to protest safely during the pandemic, then they can also return to work safely.

They called the nonessential business shutdown unreasonable and wrote that they “strongly object to the arbitrary nature of the current executive orders.”

“Coloradans are done with mass quarantining,” the letter stated.

Rep. Larry Liston, R-Colorado Springs, said his constituents say they’ve been trying to be safe and abide by the orders, but it has gone on too long.

“It’s been well over a month,” he said. “For some people, this is the so-called ‘cure is worse than the disease.’”

Critics of the shutdown come from a range of perspectives and political persuasions. Many are conservative supporters of President Donald Trump; others are farther to the right or libertarians untrusting of government statistics. But still others are Democrats or apolitical citizens who have lost their jobs, their businesses, their ability to provide for a family. They’re anxious, worried.

“Our country can’t afford what is happening,” said Mary Conley, a Jefferson County woman who attended Sunday’s protest. She added, “My body, my choice. We can get back to work.”

Philip Varley, a 61-year-old retired accountant in Jefferson County, has sent hundreds of emails to Polis and news outlets as part of a spirited citizen crusade against the shutdown. Two weeks ago, he spent one day sitting outside Denver-area emergency rooms with a video camera to gather evidence the hospitals are not overcrowded, he says. And on Sunday, he protested alongside many others.

“This mass unemployment caused by government action has forced people into poverty and the deaths that will come long-term from that will far exceed any deaths of people from COVID,” Varley said. “So, on a net basis, I don’t believe we will have saved any lives. On a temporary basis, we may have postponed a few.”

Anti-shutdown advocates, though gaining in numbers, remain a minority within the American public and within both major political parties, polling shows. A national April 17-19 survey found 22% of Americans, and 36% of Republicans, supported anti-shutdown protests. A poll from April 16-20 found 12% of Americans, and 22% of Republicans, believe restrictions are too onerous.

And now, as the Colorado governor has decided not to extend the state’s stay-at-home order, he is receiving pushback from some who say it’s too early to lift restrictions. Those who oppose shutdown efforts say it’s still not enough.

Victoria Reynolds, chair of the Colorado Libertarian Party, says the party began protesting Polis’ state-at-home order on the March day it went into effect, beginning with a petition and followed by the first protests. The message from libertarians was simple: This is an unconstitutional constraint on civil liberties.

In the month since, she has watched the movement grow from a few people, to hundreds, to thousands protesting at the Capitol. The governor criticized the anti-shutdown protests the day after he agreed to let it expire but repeated a common refrain from protesters, telling NBC, “Every business is essential. Everything that people do is essential.”

As a libertarian, Hollywood agrees the solution isn’t government intervention, which she believes has led to a ripple effect of unintended consequences and hobbled businesses. She has criticized both sides of the argument for sounding heavy-handed — those who say the state must be shut down as well as those who say everything must reopen immediately — and would rather rely on individual and business decisions.

“You can have all the government orders in the world, but so much of it just comes down to personal responsibility,” she said.

Polis touted the libertarian message of personal responsibility at his press conferences about the safer-at-home order this week. The extent of his libertarianism is debated in Colorado politics, but many in the anti-shutdown movement have hoped to appeal to it. Rep. Ken Buck, a Windsor Republican and chair of the Colorado Republican Party, believes it affected his decision-making.

The congressman, who was arguably the first elected official in Colorado to publicly oppose the stay-at-home orders, doesn’t believe the state should return to a pre-coronavirus normalcy yet. Waiters and waitresses may need to wear masks, restaurant tables may need to be spaced apart, and nursing homes must take extraordinary precautions to protect the most vulnerable. But, he says, the economy should reopen soon, to protect lives rather than jeopardize them.

“The reality is, shutting down our economy as we have costs lives. We’re going to see in a few months that we had an increase in suicides, that we had an increase in other social pathologies. For example, I can’t get certain (medical) tests done and others can’t get certain tests done that prevent disease. If you can’t get those tests, you’re going to see more deaths from other kinds of diseases,” Buck said.

Polis expects to issue his “safer-at-home” order by Monday, allowing some businesses and retailers to reopen through a phased approach. They will have to abide by restrictions, such as limiting numbers and implementing safety measures, including social distancing. Bars and restaurants will remain closed for now — a point of contention for critics of stay-at-home orders.

Some counties will have stricter regulations while others can apply for more flexibility if public health departments support the move. But if an individual county does not have its own regulations, the statewide order remains.

Liston, the state representative, applauds a phased approach but believes more flexibility is needed, particularly for restaurants. He thinks they should be allowed to open with precautions provided from health departments.

“I think most businesses are going to bend over backwards for the sake of not only their employees but their customers,” he said.

Senate Minority Leader Chris Holbert said in a statement that Coloradans have adapted to social distancing by wearing masks and constantly washing their hands.

“We understand the threat of COVID-19 and how it attacks different people in different ways,” he said. “It’s time for government to take this measured step toward getting people back to work and restoring our economy while embracing the lesson we have learned over the past weeks.”

Oltmann, the Castle Pines CEO, says he will continue financing anti-shutdown protests and expects them to continue growing. A slow, staggered reopening does not satisfy his movement’s demands, Oltmann says.