Eleven Madison Park partners on their journey to the world’s best restaurant, and what’s next – CBS News 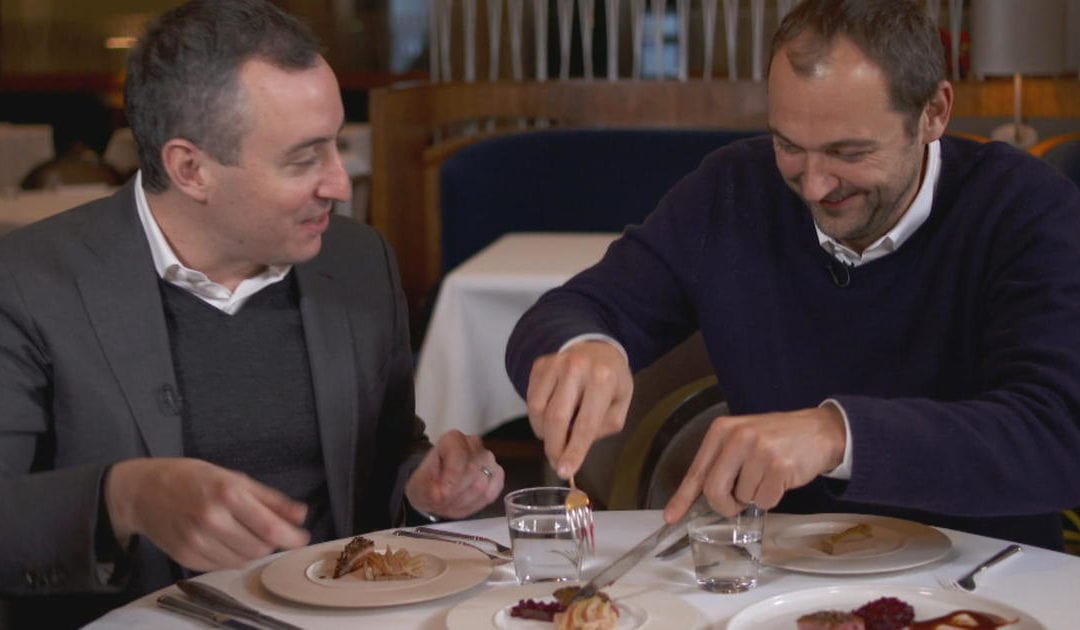 The venerated New York restaurant Eleven Madison Park has earned just about every possible honor: three stars from the Michelin Guide, four stars from The New York Times, and in 2017, the influential guide “World’s 50 Best” named it the best restaurant in the world.

The pair behind Eleven Madison Park has slowly been expanding their reach, including a much less formal affair.

High atop the Rocky Mountains in Aspen, Colorado, Eleven Madison Park chef Daniel Humm and his partner Will Guidara have taken their elevated cuisine on a winter break. The dishes and the 10 outdoor tables tucked inside yurts are a nod to Humm’s Swiss roots.

“For the first time in my life, I get to do the food that I grew up with,” Humm told CBS News correspondent Dana Jacobson. “So fun.”

Fun is something Humm and Guidara have brought to fine dining, even at their Cathedral Eleven Madison Park in New York.

Guidara oversees a front of house staff of 60 who meticulously follow the details from a 110-page training guide. They even created a position – called the dream weaver – who caters to a table’s every need and more.

“There was a table sitting over there … on their way to the airport going back to Europe, and we overheard them saying what a great trip they had, but they were lamenting the fact that they never had a New York City hot dog. And so I ran out to the hot dog cart in front of the restaurant, bought a hot dog and brought it back to him in the kitchen and said, Daniel, can we serve this to them as their next course?” Guidara said.

At first, Humm thought his partner had gone mad but trusted him enough to know that there was probably a food reason for it. It’s that kind of service, along with Humm’s craftsmanship in the kitchen, that has made Eleven Madison Park a destination.

“I do sometimes feel like kind of on top of the world for sure. And for some people, it might seem like this happened overnight. And it didn’t,” Humm said.

In fact, growing up in Switzerland, Humm had no particular interest in food, but his mother insisted on buying their produce from local farms.

“I remember the salad being so crunchy and so sweet and juicy, almost, and she looked at me and she’s like ‘this is why’ and that’s a lesson that I never forgot,” Humm recalled.

When he was just 14 years old, Humm left home to pursue a professional cycling career. During the off-season he got a job in a kitchen to earn extra money.

A serious cycling accident when he was 22 made him reevaluate his career path. After another stint working in Switzerland, Humm got an opportunity to interview for a position at Campton Place in San Francisco. It wasn’t an easy decision, though.

“At that point, I did not speak English. I’ve never been outside of Europe. All I knew at that point about America and food was definitely not the food that I thought myself as a chef doing,” Humm said. “But I was open enough to come for an interview and then I was in San Francisco and I was brought around to the markets and the city and Napa Valley. And my mind was blown away.”

Humm was wooed to Eleven Madison Park by legendary restaurateur Danny Meyer, where he teamed up with Guidaro. In 2010, the pair were invited to the awards for the 50th Best Restaurants in the World.

“We barely sat down. The list starts. And they said, ‘And number 50 in the world, new entry from America, Eleven Madison Park.’ So that night, we felt extremely disappointed. It was an honor but we came in very last. We went back to the hotel, we bought a bottle of a whiskey, honestly, and we sat out there all night until, like, 5 in the morning. And we came up with a plan … this is what we need to do to get to No. 1.”

In 2011, Humm and Guidaro bought Eleven Madison Park and the restaurant slowly climbed the list until 2017, when it was named No. 1 in the world. This year it fell to the fourth spot.

Asked how badly he wants that No. 1 spot again, Humm said, “I think there are bigger things. Let’s be honest, very few people are able to ever experience Eleven Madison Park. And this shouldn’t be only limited for just people who can afford to eat here and so I think our motivation is to affect more people.”

Their restaurant group, Make It Nice, now has five permanent restaurants, including Made Nice, which has fast casual dining. It’s the kind of place Guidara expected to be a part of before they bought Eleven Madison Park more than a decade ago.

“I didn’t want to be here,” Guidara said. “I didn’t want to be in fine dining and so I was only gonna be here for a year and then, I was going to go work at Shake Shack. Then, I got to know him and so a year later when it was time to change jobs, I had fallen back in love with what was always supposed to be my life’s work. And it’s because of him… so it’s 13 years later now.”