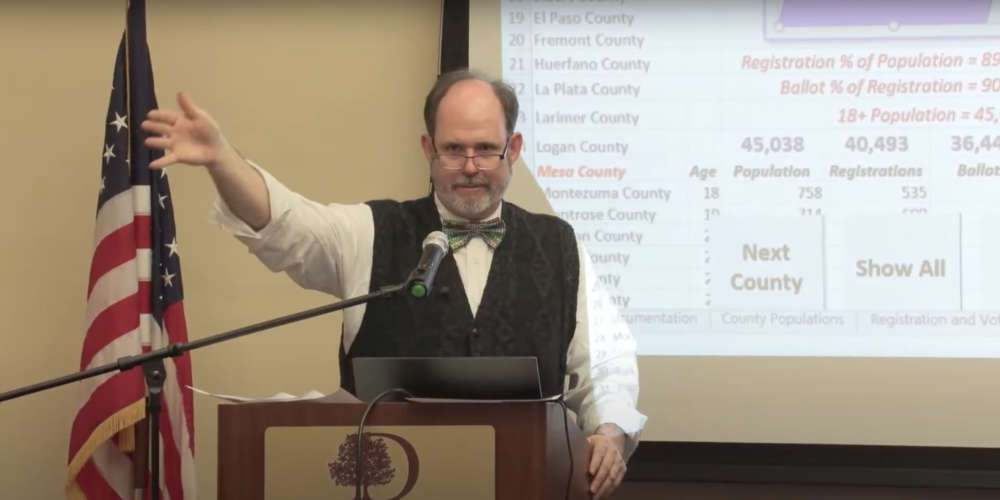 “You know the story about the Navajo Windtalkers in World War Two? Imagine if I was a German and I just happened to know Navajo, right? Then maybe I could break the code. Well, that’s what happened.”

The man asking me to imagine him as a Nazi is Dr. Douglas Frank, a part-time math teacher who is currently visiting Colorado to push an eye-popping election fraud conspiracy at events across the state.

Frank, who teaches at a private school in Cincinnati, believes he’s uncovered an algorithm that proves that Colorado’s 2020 election results (along with those in many other states) were rigged in favor of President Biden.

Frank first made these claims in an online video called “Scientific Proof,” which is hosted (and bankrolled) by mustachioed Trumper Mike Lindell, better known as the “My Pillow” CEO who wanted Trump to declare martial law to remain in power. The video features Frank claiming to have analyzed publicly available election data and determined that someone used computer algorithms to manipulate votes all across the nation.

From the video’s promo:

“Dr. Frank testifies to host Mike Lindell that deviations and mathematical impossibilities could not have been done by humans, by artificial intelligence and computers that were running before, during, and after the 2020 U.S. election. Dr. Frank’s investigation reveals that the 2010 national census data was used to manipulate the 2020 election rolls and to inject phantom votes into the election totals.”

“I found the algorithms that control how many registrations and how many ballots you need in every county to control an election,” Frank tells Lindell at the start of the interview. “That’s what I figured out. And it’s widespread- it’s in every state that I’ve checked so far and it’s in magnificent parts-per-million detail, so I know it’s not an accident. It has to be done by an algorithm.”

The slides Frank shows to Lindell in the video purport to show data on county-level population, registration, and actual votes cast. He and Lindell gleefully point to spikes that appear to show more votes cast than people registered or even living in various Colorado counties, including Broomfield, Mineral, and Bent.

Doug Jones, computer science professor at the University of Iowa and a national expert on election security, is skeptical.

“Every one of those graphs of age versus population for the different counties is obviously smoothed data,” says Jones. “Perhaps he took the real data for age versus population and smoothed it with a 6th order polynomial…The usual presentation of census data is in bins that are 5-years wide.  Taking such data and smoothing it with a polynomial would give exactly the kind of curves that Douglas Frank was showing.

Furthermore, the numbers Frank are showing for verifiable totals such as ballots cast are simply wrong.

“His estimate isn’t just off by nine percent,” writes Engen. “The number he’s using for verification is too! This isn’t an isolated incident, he’s using incorrect ballots cast figures as the basis for his entire analysis. You can’t get a real result when the underlying data you use is wrong.

This isn’t Frank’s first rodeo. He authored a similarly flawed but widely shared Facebook post, “Why is the Epidemic Fading?” last August, which was quickly debunked by the Assciated Press.

In the video, Frank spends a lot of time on Broomfield, noting apparent discrepancies in the charts he created between the supposed number of residents, registered voters, and ballots cast in the 2020 election.

The City and County of Broomfield Elections Officials want to alert residents of misinformation circulating on a video posted to social media.

While the Broomfield 2020 General Election voter registration data seems correct and unmanipulated, the census data used in the video incorrectly portrays the number of eligible registered voters and does not account for population growth, community growth, the influx of out-of-state voters into Colorado, or naturalization of new citizens.

We are confident in our proven process and look forward to answering any questions or concerns residents may have. Please reach out to the Elections Division directly at electionsdivision@broomfield.org or 303.464.5857.

Even if all the data were accurate, a county’s voter registration rolls showing more people than live in the county isn’t at all surprising- it’s the way our voting system is supposed to work.

As a general rule federal law is designed to encourage voter participation, which means it’s easy to get on a county’s voter roll than it is to get off.

“[Federal] law forbids voters to be struck from the records if they move away and do not inform the county that they moved, their registration must remain on the books,” says Jones  “Moving in-state, since 2002, when a voter re-registers in their new address, their old registration is cancelled, but out-of-state moves don’t do this because voter records are state records, and each state has no obligation to talk to other states. This is awful [from a clean data perspective], but in studies of cross-state-line voter fraud that I’ve seen, the numbers are minuscule. The vast majority of ‘ghost voters’ don’t abuse the fact that they are inadvertently registered in two states. Doug Frank and Mike Lindell take this fact and misrepresent it as part of some vast conspiracy.”

According to Chris Jackson an election law attorney at Holland & Hart and adjunct professor of election law at Denver University, the discrepancies created by these rules are anticipated by election administrators and understood to be a cost of increasing ballot access.

“The National Voter Registration Act (NVRA) regulates how states manage their voter rolls,” says Jackson. “States can’t unilaterally remove voters. The process varies by state, but generally, if the Secretary of State’s office suspects a voter has died or moved, [which is often based on information from the U. S. Postal Service] it first has to send a postcard to the voter’s address. If there is no response to the mailing and subsequently no vote cast by that voter in the next two federal elections, then the office may remove the voter.

“This is expected and understood and the system is built to accommodate this in order to make it easy for people to vote.”

Frank goes on to explain that he believes a computer program inserted into the election machines casts a “phantom ballot” on behalf of a real registered voter who didn’t actually vote.

U.S. elections are managed at the county level. The claim that a person or group of people secretly hacked the election machines of all 64 counties in Colorado is dubious not only logistically but politically, especially when one is talking about Mineral County, population 824.

Afterwards the statewide results are double-checked via a risk-limiting audit. Colorado became the first state in the country to require these audits in 2009.

Asked via phone how this rigging would work, Frank said, “I’m saying that people printed ballots and mailed them in on behalf of people that were unlikely to have returned to ballot.”

Dr. Frank also claims his analysis of the voting data shows that the election was rigged in favor of Joe Biden.

“Yeah, whoever rigged it, rigged it that way,” affirmed Frank. “And you know it’s rigged because it came out exactly as rigged. I mean the fact that I can predict all [64 counties’ vote totals] means it is conforming to an algorithm.”

In the video, Frank doesn’t ascribe blame for this unprecedented hack, described as “the biggest cyber-crime in world history,” but Lindell does:

“We have been attacked by foreign actors, starting with China and with help of domestic actors here, you know, they had to be let in.”

To be clear, there is zero evidence of this.

In a declassified on Mar. 16, the U. S. Director of National Intelligence released the nation’s Intelligence Community’s assessment of foreign threats to the 2020 federal elections. The report distinguishes between foreign interference, trying to actually change votes or registrations, and influence, spreading disinformation to undermine public confidence in our election system.

The top finding: “We have no indications that any foreign actor attempted to alter any technical aspect of the voting process in the 2020 US election, including voter registration, casting ballots, vote tabulation, or reporting results.”

None of these facts or objections is preventingFrank from enthusiastically promoting his conspiracy theory to conservative groups across Colorado. Grand Junction “Patriot” group Stand for the Constitution, whose Facebook members include U. S. Rep. Lauren Boebert (R-CO), state Rep. Rich, and Pueblo GOP Chair Marla Reichert, hosted him on the evening of Friday, April 23. Sheronna Bishop, a Grand Junction conservative social media personality who formerly served as Boebert’s campaign manager, invited Frank to Colorado and organized the event, tickets for which cost $15.

Dr. Frank told the Colorado Times Recorder he’s working closely with Bishop. In a Facebook to her nearly 13,000 followers, Bishop confirmed that she and other activists are conducting “voter integrity canvassing” in Mesa County. According to Dr. Frank, this consists of volunteers knocking on doors of registered voters’ houses to confirm if and who cast ballots in the 2020 general election.

Today, the Republican Study Committee of Colorado (RSCC) hosted Frank along with another election fraud conspiracist, former professor John Eastman, who retired from Chapman University (but remains a visiting scholar at The University of Colorado’s privately-funded Benson Center for the Study of Western Civilization) following his public statements that the 2020 election was stolen.

Luck asked Eastman if there were still legal claims that can be pursued as far as proving fraud and overturning the 2020 election. Eastman detailed a few ongoing complaints but expressed doubt at their likelihood of success.

Hanks asked the following question: “Was it obligatory that President Trump walk away and cede power to Joe Biden? Was there any other course of action that could have been taken earlier in the process?”

Eastman responded by lamenting the disorganized nature of the Trump team’s legal response, and noting some missed opportunities, but made it clear that he was not among those (such as Mike Lindell) who were advocating for “crossing the Rubicon” and taking action outside of the Democratic and legal systems.

The conspiracy theory that Dominion Voting system rigged the election against Trump was featured prominently in the recent election of the Colorado GOP chair, with Kristi Burton Brown, who eventually won, and leading contender Scott Gessler both embracing the possibility that the company acted maliciously to flip votes to Biden. Since then Luck and other Republicans brought bills based relating to various election fraud conspiracies that have since been killed or withdrawn.

Nevertheless, today’s panel and the questions posed to the speakers by sitting elected officials make it clear that, at least among Republicans, the “Big Lie” of election fraud is very much still circulating in Colorado.