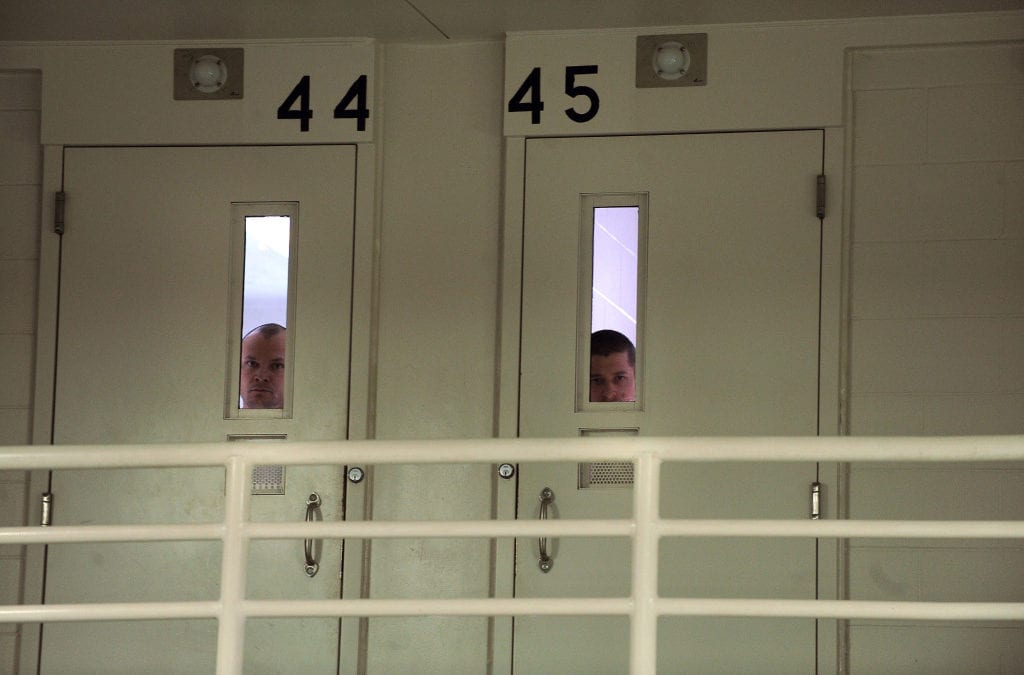 The more than 1,200 inmates inside the El Paso County jail on any given day were not provided masks until last week, when the jail became the site of Colorado’s second-largest coronavirus outbreak.

“The masks were not provided all the way across the population until the week of Nov. 1,” El Paso County sheriff’s spokeswoman Sgt. Deborah Mynatt said Wednesday.

That’s in violation of the guidance for detention facilities provided by the Centers for Disease Control and Prevention, which states facilities should provide all inmates with masks at no cost and frequently wash them.

“Has (Sheriff Bill Elder) been doing nothing to prevent the spread of the coronavirus in the jail?” said Mark Silverstein, legal director of the ACLU of Colorado. “It’s mindboggling.”

The sheriff’s office acknowledges on its website that masks are effective in slowing the spread of COVID-19.

“We will stress that wearing a mask will slow the spread of COVID-19 and save lives,” the website states in a section that explains deputies will remind the general public of the state’s mask mandate, but will not enforce it.

On Monday, 911 inmates and 73 staff members had tested positive for COVID-19, according to department data. In a jail with a recent average population of about 1,200, that means three in every four inmates had the virus. The majority of those inmates have not been convicted of the crime they are being held on and are in jail because they cannot afford to post bond or are not allowed a bond. For example, 1,109 of the 1,244 inmates incarcerated at the jail on Wednesday were being held pre-trial — or about 89% of the population.

Outbreak data published Wednesday by the Colorado Department of Public Health and Environment showed that the outbreak at the jail is the second-largest recorded in the state, after the University of Colorado Boulder, which has recorded 1,766 cases. At least 27 other correctional facilities — jails, prisons, halfway houses, immigration detention centers — also recorded outbreaks Wednesday.

According to the El Paso County Sheriff’s Office, the number of coronavirus-positive inmates inside the jail dropped to 148 on Wednesday as inmates left the facility or were outside the 10-day infectious period.

The El Paso County jail at first did not issue masks to every inmate because there was a limited supply of face coverings that were suitable for a jail environment, Mynatt said. The jail cannot use masks that have metal parts, like staples, because of safety concerns, she said. She said she didn’t know why masks weren’t procured later.

“I’m not sure on who made the decision or why, but I know that the entire time we were taking recommendations from public health,” Mynatt said.

Neither El Paso County Public Health nor the state health department responded late Wednesday afternoon to questions from The Denver Post about whether the agencies were aware of the lack of masks at the jail or whether not providing masks violates the governor’s mask mandate.

“We have taken the guidance from the CDC which include creating ways to reinforce hygiene practices; intensifying cleaning and disinfection of the facility; regular symptom screening for new intakes, visitors, and staff; continued communication with incarcerated/detained persons and staff; social distancing measures; as well as testing symptomatic and asymptomatic individuals in our facility,” Mynatt said in an emailed statement Wednesday evening.

The jail in late July started providing inmates with masks if they went to court or if they were moving about the jail.

“This is like Sheriff Elder hanging a sign on the jail saying, ‘Please sue me,’” Silverstein said. “And I imagine someone will accept that invitation.”

The El Paso County Sheriff’s Office discovered the outbreak the week of Oct. 26 after testing two inmates who were scheduled to be transferred to a Department of Corrections prison and receiving positive results, Mynatt said. The Department of Corrections requires jails to quarantine and test any inmates before they can be transferred, Mynatt said.

Neither inmate had symptoms, Mynatt said, and the sheriff’s office conducted more testing, including calling in the Colorado National Guard to conduct widespread testing at the jail on Nov 1.

The number of positive cases connected to the jail exploded as testing expanded. On Oct. 27, 10 deputies and eight inmates recorded positive tests. By Nov. 9 — less than two weeks later — 911 inmates and 73 staffers had tested positive. None of the inmates have been hospitalized, according to the sheriff’s office, and those who are sick are being treated by the jail’s contracted private health care company, Wellpath. Two deputies have been hospitalized.

The number of positive tests recorded Nov. 9 might be revised to be slightly lower than previously reported as staff comb through the data and find some duplicate entries, Mynatt said.

“This is a very fluctuating situation,” Mynatt said. “A majority of these individuals were asymptomatic.”

The sheriff’s office was in constant communication with county and state public health officials as the outbreak expanded, she said. Mynatt said she wasn’t sure if inmates could receive a mask upon request prior to last week’s distribution.

It’s difficult to identify exactly how the virus entered the jail because the facility sees a constant churn of people entering and leaving the building, Mynatt said. About 30 to 40 new inmates are admitted every day and deputies come and go from their shifts. The jail is not testing every inmate as they are processed into the facility but is checking their temperatures and asking questions about their health.

Most inmates live in housing units of about 60 people, Mynatt said. The jail was able to reduce its population from an average of about 1,700 inmates before the pandemic to closer to 1,200, which helped people practice social distancing by allowing them to spread out.

“The thought was there in the very beginning that this may, like any disease in any jail, grow like wildfire if you can’t identify it quick enough,” Mynatt said. “That’s what we feared.”

But some of that extra space has been lost as construction projects have caused the sheriff’s office to close several housing units. The agency received $13.5 million in federal dollars from the CARES Act to complete a number of updates and renovations in connection to the coronavirus pandemic.

A series of repairs to the jail’s sliding doors has meant that entire housing units have been closed while contractors work due to social distancing and because inmates are not allowed to be near construction equipment because of safety concerns. The repairs were crucial to jail security, however.

“We had terrible locking systems, we had inmates that could pop locks very easily,” Mynatt said.

The sheriff’s office last week also installed a new air filter in the ventilation system that is intended to reduce the risks of airborne disease.

The sheriff’s office has not had to take up other law enforcement agencies on their offers to provide officers to replace sick staff. The agency also has not yet had to call on patrol deputies to work in the jail, Mynatt said.

“We are not short right now, we’re making everything work,” she said.

An El Paso County jail deputy, Jeff Hopkins, died in April due to complication from the virus — the only publicly known Colorado law enforcement officer who has died in connection to COVID-19.