EDITORIAL: Mob justice in Colorado for a random motorist 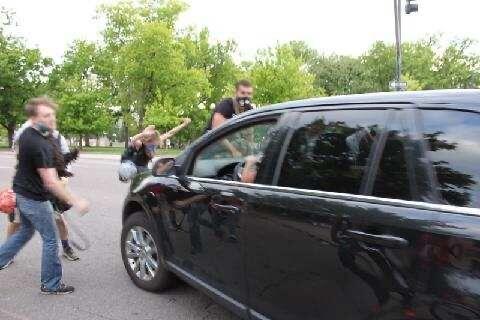 You are driving along a major traffic corridor as you commute home. You approach a familiar intersection that’s usually pretty congested. But this time, there’s something unfamiliar — it’s congested with people on foot — and they descend upon you without warning. They surround you in your vehicle and begin kicking and hitting it, shouting at you and taunting you.

You have no idea why any of this is happening. You don’t know who these people are or why they have morphed into an agitated mob taking out their fury on you. Chaos ensues. At one point, one member of the mob jumps on the hood of your vehicle and smashes the windshield.

Someone in the crowd captures the incident on video. It shows you trying to drive away from the swarm of people. The person who is on your hood jumps off, and his cohorts shout their support. As your car moves slowly, the video shows you steer momentarily toward him. Your car bumps him in the seat of his pants and he falls forward, breaking his fall with his hands and landing unharmed. He bounces back up and, as you drive off, gives chase on foot along with the rest of the mob.

Weeks later, you are charged by the district attorney with third-degree assault for “knowingly or recklessly causing bodily injury to a protester,” and reckless driving. Both charges are misdemeanors but could land you in jail for up to two years.

All of that actually happened, of course, to 37-year-old Jennifer Watson as she drove past the State Capitol in Denver last spring. It was a few days after the killing of George Floyd by Minneapolis police, and the crowd ostensibly had gathered to demand justice for Floyd and other Black Americans who have suffered at the hands of law enforcement.

So, they accosted and briefly terrorized an innocent motorist. One who had done nothing to provoke them and had no connection to the presumed focus of their anger. In other words, she was a scapegoat.

As reported by The Gazette this week, a Denver jury acquitted Watson last Friday of the more serious charge but convicted her of the lesser reckless-driving charge.

The whole affair was a miscarriage of justice to begin with. More to the point, the decision to charge Watson with anything was an abdication by authorities — to outright mob justice.

The charges brought against Watson seemed much more about channeling the political climate of the moment than trying to sort right from wrong.

The Denver District Attorney’s Office has leeway and makes subjective determinations to charge or not charge wide-ranging suspects on a daily basis. The focus in this case, all along, should have been on disciplining the childish rebels without a clue who had attacked Watson. They were harassing and impeding passing motorists in their vehicles; in Watson’s case, they damaged her vehicle. They were doing so on foot on the street, where they didn’t belong. All of which is to say they were committing assorted crimes.

Let’s be unequivocally clear about this: This mob’s actions had nothing — nothing — to do with righting wrongs against Floyd or anyone else. Nor were they helping to reform the justice system.

They couldn’t even claim the old fallback of trying to “raise awareness.” For all Watson knew, she’d encountered a mob of British soccer rowdies looking for a fight.

The Denver DA concluded that 22-year-old CU grad Max Bailey — the man who had attacked Watson by jumping on her hood — was a victim. Never mind what intimidating and violent actions of his precipitated the confrontation. As to his claim in media reports that he had leapt on her car only to avoid injury — oh, please.

Yes, her vehicle veered toward him after he had attacked her. Was she angry? Afraid? Disoriented after being subjected to mass intimidation?

In reality, her assailants, including Bailey, by all indications were victims only of their own childish, foolish, brazen and bullying behavior. They had no right to take over the streets no matter what cause they claimed to champion. There are means of staging street marches legally with the blessing of City Hall; no restrictions on what the message is, either. But they weren’t in the mood for law-abiding behavior.

Watson was the real victim — twice. First, as the victim of the attack and then, of authorities’ absurd decision to publicly pillory her. She was a sacrificial offering to appease the angry mob.

Last week, a jury decided it wasn’t buying into it, for the most part. That’s better than going along with such prosecutorial nonsense, but it’s a disgrace Watson was put through this ordeal in the first place.