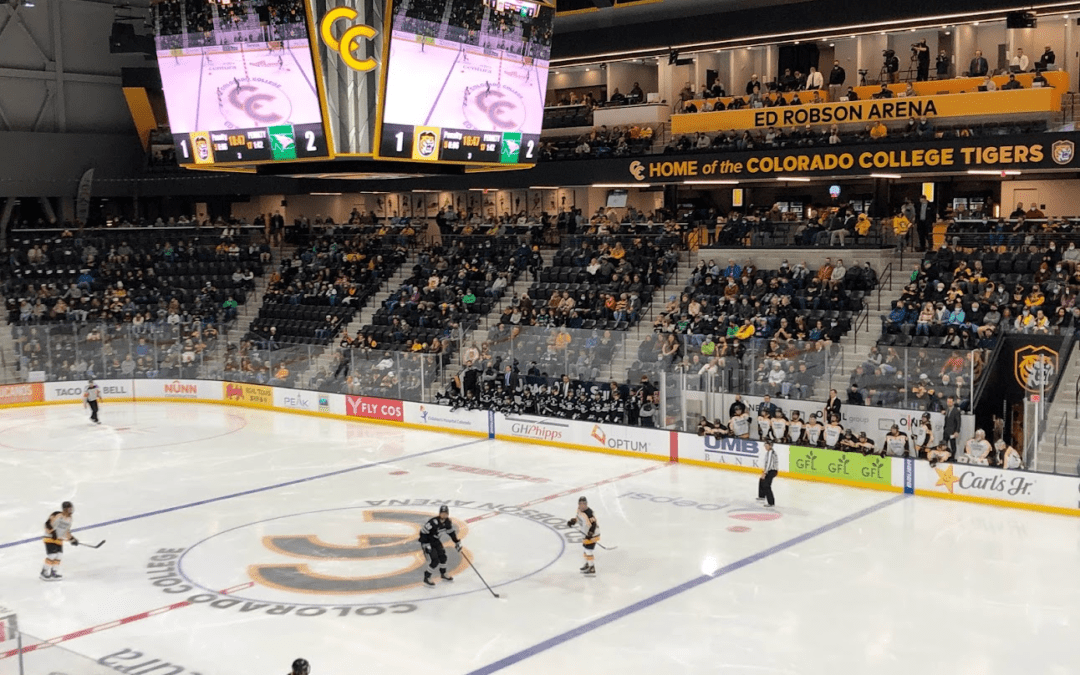 Worth the Wait:  Ed Robson Arena

The hockey team at Colorado College, located just north of downtown Colorado Springs, has a long, storied history. Since starting play in 1938, the Tigers have qualified for 20 NCAA Tournament Appearances and four NCAA Tournament Frozen Fours, winning national championships in 1950 and 1957. The program has produced two Hobey Baker Award winners, seven Olympians, and more than 40 players who later played in the National Hockey League.

In the program’s 93 years, however, CC never played its home games on campus – or anywhere near it. From their inception in 1938 until 1994, the Tigers played their home games in a converted barn behind Colorado Springs’ renowned Broadmoor resort hotel, five miles southwest of campus, called the Broadmoor Ice Palace (later renamed the Broadmoor World Arena). The Tigers next played “home” games at the United States Air Force Academy’s Cadet Ice Arena, about 15 miles north of campus, between 1994 and 1998 during construction of the program’s third home. That home was the World Arena (later renamed the Broadmoor World Arena after a sponsorship deal with the hotel), which opened before the 1998-99 season approximately six miles southeast of campus. Broadmoor World Arena II seated 7,750 and had an Olympic-sized rink (100 feet wide).

This four-score-and-13-year itinerance ended in the fall of 2021 when the Tigers moved into Ed Robson Arena on the CC campus. The arena is named for a former CC player who was granted leave from the United States Marine Corps to play hockey for the silver medal-winning United States at the 1956 Winter Olympics in Cortina d’Ampezzo, Italy. Robson also donated $8 million for the construction of the building that now bears his name. Robson Arena occupies what was once a full city block just south of campus, across Cache la Poudre Street from the college’s South Hall dormitory and Nava Quad. Students can attend CC games simply by buying a student ticket and crossing the street. The $52 million structure also has a team shop, CC’s health services facilities, a campus mail center, classroom space, and an adjacent parking structure. Robson seats approximately 3,400 fans and is a long-overdue addition to CC’s beautiful campus.

There’s nothing fancy about Robson Arena’s food and beverage offerings.  Cheeseburgers, hot dogs, chicken strips, and fries are all available at the concession stands along with pretzels, nachos, candy and drinks.  Robson Arena is a Pepsi and Anheuser-Busch facility, with all soft drinks sold in plastic bottles and beer sold either in cans or on tap.  Robson Arena’s best food can be easy to miss.  Local ice cream shop Josh & John’s has a cart on the concourse in the arena’s southwest corner.  There are five, hand-scooped flavors available for $5 apiece.  Josh & John’s has even created a flavor, CC Tiger Stripe (golden yellow cake striped with brown sugar caramel), especially for games at Robson Arena.

Fans enter Robson Arena on ground level through a main entrance at the building’s northwest corner, located at the corner of Cache la Poudre and Tejon Streets. Once inside, fans can either visit the team store at ground level or proceed via stairs or a nearby elevator to the concourse level. Robson Arena’s concourse circles the rink, and is where concession stands and restrooms are located. The concourse is atop the seating bowl.

Robson Arena is intelligently designed to create an excellent college hockey atmosphere. Its size harkens the late, great AMC Pacer: small but roomy. There is not a bad seat in the house, all of them having unobstructed sightlines to the action. No seat is more than 10 rows from the ice. Robson is noticeably smaller than Broadmoor World Arena II. Robson seats 3,700 – approximately half of what BWAII seats. Fans at Robson sit much closer to the ice, creating an intimate feel that provides the Tigers with a profound home-ice advantage. Additionally, Robson has an NHL-sized rink, which is 85 feet wide – a 15-foot reduction from the Tigers’ rink at Broadmoor World Arena II. The seating bowl is steep, creating the feeling that the fans are on top of the ice. The new confines can be unfriendly for visiting teams. “The atmosphere is much better than their old rink,” University of North Dakota defenseman Ethan Frisch told the Grand Forks Herald’s Brad Elliott Schlossman on December 11, 2021.

CC has placed its student section behind the east goal, where the Tigers attack in the 1st and 3rd periods. Students fill the section and are engaged in the action, “welcoming” opponents during pregame warmups and calling attention to opponents’ misdeeds. The visiting team’s fans sit in Section 101. The building’s primary concession stand is on the south concourse with smaller concession stands in the northeast and northwest concourses. Club seating and the pressbox are a floor above the main concourse on the arena’s south side. The club level has its own concession stand.

Seats farthest from the ice might be the best in the house. The “Top Shelf” Bar Rail runs along the circumference of the concourse and sits at the top of each seating section, offering ticketholders a high-top table and chair, and unobstructed views of play. Some fans eschewed their chairs in favor of standing. This bar-style seating provides a surface to eat other than one’s own lap. There are locations along the concourse for fans to stand while watching the game.

The arena has a state-of-the-art sound system that hair metal bands and audiophiles will envy. With 103 speakers, the sound is crisp and clear. Sound can also be loud and startling, however, particularly during pregame player introductions. Fans with auditory sensitivities and those who just don’t like loud music will want to bring headphones or earplugs. A primary scoreboard with four-way, high-definition video screens (493,920 pixels) hangs over center ice, adorned with CC’s new logo and branding. The video screens do not display any advanced statistics, just the score, time, period, shots on goal, and penalties. But the video display is as sharp as can be found at any venue. Smaller scoreboards have been placed on the walls behind each goal.

Robson Arena’s north wall includes large exterior windows that provide natural light and, after sundown, an ethereal quality to the arena as car lights speed by outside on Cache la Poudre Street.

Robson Arena is located on the south edge of the 90-acre Colorado College campus, about a mile north of resurgent downtown Colorado Springs. The campus has several buildings listed on the National Register of Historic Places, with the Pikes Peak Greenway Trail just west of campus. That 16-mile trail runs north-to-south and connects with other trail systems. The Colorado Springs Fine Arts Center is also part of the CC campus.

Downtown Colorado Springs is enjoying somewhat of a renaissance, thanks in part to the “City for Champions” project that provided funding for the construction of several facilities (including funds to build Robson Arena). One of those is the new United States Olympic and Paralympic Museum, which has received high praise since opening in July 2020. The museum is across the street from another such facility: the 8,000-seat Weidner Field, home of the USL Championship’s Colorado Springs Switchbacks and host of the 2021 NCAA Division II Women’s Soccer Championship. The United States Olympic Committee also moved downtown from its former offices at U.S. Olympic Training Center, east of downtown.

There are non-sports-related reasons to visit downtown Colorado Springs, as well. Denver’s Tattered Cover bookstore will open a store in downtown Colorado Springs in 2022. Several new restaurants and shops have opened downtown, as well. Yet downtown still has well-established places to eat and drink, such as the Phantom Canyon Brewing Company and MacKenzie’s Chop House. Italian restaurant Panino’s is a short walk south of Robson Arena on Tejon Street, where CC hockey fans have flocked since 1991.

Colorado College has a staunch following of fans who make the Robson Arena experience as good as it is. The Tigers opened the 2021-22 season with eight sellouts (and counting) during which fans have filled Robson’s seats. The best time to visit concession stands and restrooms is during play because fans stay in their seats to watch the game. Again, the student section keys the energy for the rest of the crowd.

Robson Arena is not difficult to find. From Interstate 25, take the Uintah Street exit and proceed east less than a mile to Nevada Avenue. Head south on Nevada; the arena sits at the corner of Nevada and Cache la Poudre Street. Fans can come to Robson on Mountain Metro’s No. 19 bus route, which travels north and south along Nevada and has a stop a few steps away from the arena at Nevada and Cache la Poudre. Because Robson is part of a college campus, plenty of bike racks are available within a short walk for those cycling to a game.

Parking for Robson appears to be available only for pass holders. Fans without passes will not find open parking lots near the arena, perhaps because season ticket holders with parking passes account for a high percentage of Robson’s seats. Parking for a game at Robson is nonetheless easy. Metered and non-metered parking are on the streets to the east and south of Robson. Along Tejon Street, meters cost $1.25 per hour until 10:00 p.m. nightly.

Once inside, fans have sufficient room to move and at no point does the arena feel claustrophobic. The concourse is wide enough for fans to congregate without blocking anyone else. Wheelchair-accessible seating is located along the concourse, including at center ice, and in the northeast and northwest corners.

Robson’s small size cuts two ways. On one hand, it allows fans to sit near the ice to create an intimidating atmosphere for visitors. On the other hand, tickets can be hard to come by, triggering a real-life example of supply and demand. Ticket prices for a recent, Friday night game against perennial power North Dakota ranged from $48 in a corner to $163 for a seat six rows above one of the blue lines. Those prices will likely fall as Robson ages. But tickets will certainly be at a premium when the Tigers are winning or hosting rivals – both of which occur regularly.

Food and drink prices align with other college hockey venues. Hot dogs ($5), nachos ($6), pizza slices ($6 for pepperoni, $5 for cheese), fries ($3), and pretzels ($5) are all sold at the arena’s primary concession stand. Robson Arena is a Pepsi facility, with soda and water selling for $4 a bottle. These prices are right in line with other collegiate rinks.

Robson Arena’s design merits an additional point. Its smaller size puts fans surprisingly close to the ice without compromising sightlines. This enables the CC faithful to provide a significant jolt of energy to what happens on the ice.

A point also goes to the Tigers’ mascot, RoCCy, for not only being a great skater but an adept stick handler. RoCCy demonstrated serious skill while assisting during a recent teddy bear toss for charity.

Josh & John’s ice cream earns a point for creating a flavor specifically for CC and selling it at Robson. All the better that it’s quite tasty.

College sports are at their best with student support and involvement.  For almost a century, CC has had one of college hockey’s premier programs.  Students can now enjoy that program’s games without having to arrange travel to other parts of Colorado Springs.  It took the Tigers a long time to bring their games onto campus and they now have a sparkling new home that certainly belongs in any mention of college hockey’s finest home facilities.

Did you enjoy this content? Help support our work by becoming a supporter of Stadium Journey on Patreon. Supporter levels begin at just $2/month.