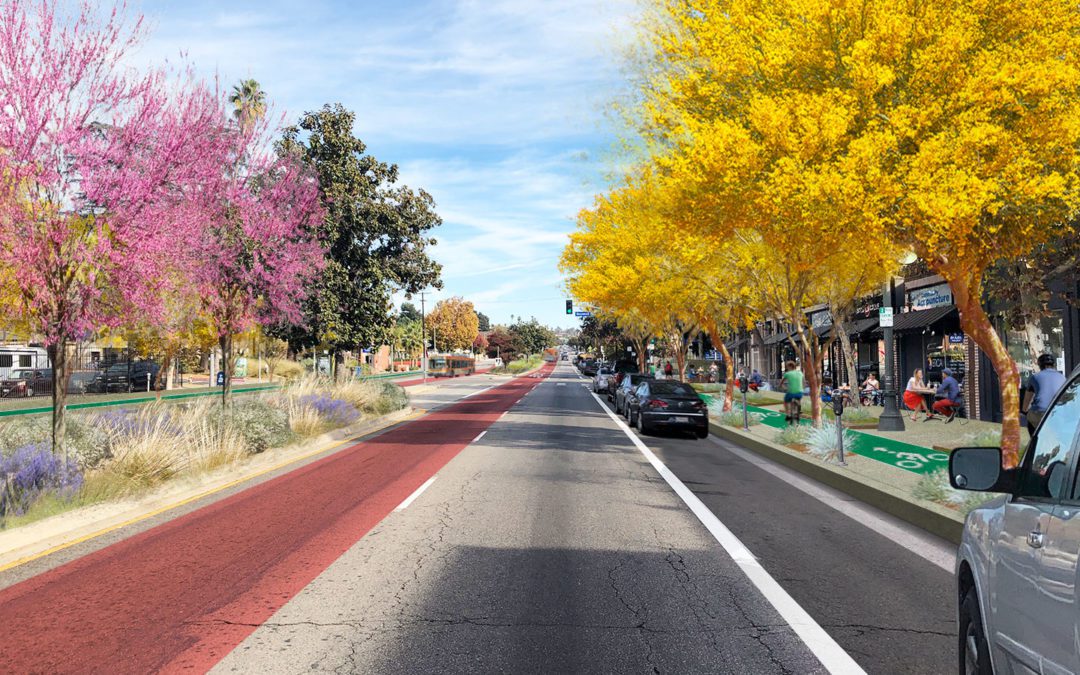 The most contentious part of the BRT line is where it passes through the northeast Los Angeles neighborhood of Eagle Rock.

During last night’s public comment, Metro heard comments and questions from about fifty people. Slightly over half of commenters expressed support for the project; just under half expressed opposition to it. Many Eagle Rock residents, homeowners, business owners, parents, cyclists and others expressed their support for the proposed BRT and especially the community-designed Beautiful Boulevard proposal.

The Beautiful Boulevard calls for reducing one car travel lane in each direction for about a mile on Colorado Boulevard through Downtown Eagle Rock.

Metro’s apparent leading alternative, called “Refined F1 option,” is a somewhat watered-down version of Beautiful Boulevard. Metro would implement the proposed lane reduction, but hold off on some walkability and bikeability features that make it safe and convenient for people to get to Eagle Rock BRT stations. Through Downtown Eagle Rock, Metro’s latest design would preserve Colorado Boulevard’s existing medians, parking, and bike lane.

Several critics asserted that the design is trying to put too many things onto Colorado Boulevard. One called it a “clown car” of “dining, parking, walking, bikes, and a big fat bus.” But advocates affirmed that characterization as desirable:

One project critic cited that it would be “super dangerous” for emergency response vehicles to get stuck in car traffic. Metro noted the center-running bus lane would be open to emergency vehicles.

Many project opponents tried to cast transit supporters as illegitimate. One stated that “the most important stakeholders are homeowners.” A business owner repeatedly called herself “a real stakeholder” and then “a person that matters.” Many of those who opposed the project started their comments by relating how many years they have lived in Eagle Rock. Several project supporters countered noting the breadth of “true stakeholders” include Colorado’s restaurant workers, many of whom rely on transit.

Near the end of the meeting, longtime Eagle Rock homeowner and California Transportation Commissioner Chair Hilary Norton commented that the plan doesn’t reduce Colorado to “one lane” but includes a lane for driving, for transit, for bicycling, and for walking.

The revised NoHo-Pasadena BRT plans are scheduled to be presented to the Metro board in May. The board is expected to approve the project’s final Environmental Impact Report (EIR) this summer.