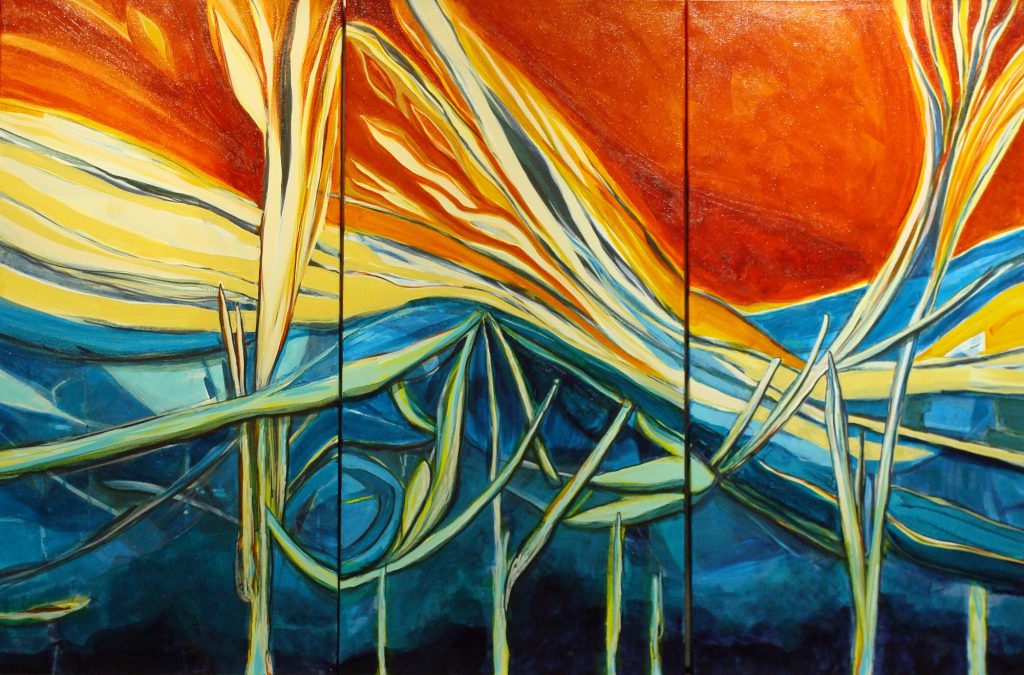 Emotive, rule-breaking and teeming with intrigue, abstract art has a way of cutting through the superficial and going right for the heart. On Friday, “Driven to Abstraction” — a group show featuring a myriad of pieces by local artists — arrives at  Artworks Center for Contemporary Art in Loveland.

“‘Driven to Abstraction’ brings together nine Northern Colorado abstract artists who focus on bringing their work to the edges of abstraction,” said Sarah LaBarre, executive director and curator at Artworks. “Not unlike abstract painters of the mid-20th century, these artists depart from social commentary by instead looking inward for inspiration. When faced with a prompt or visual ‘problem,’ each artist comes to their own conclusion working intuitively.”

The “Driven to Abstraction” group formed several years ago and has since brought compelling shows to area galleries. While the lineup of artists sometimes changes, the message and quality of work remains unwavering.

“This is the fifth edition of ‘Driven to Abstraction’ and I have been fortunate to be included from the first,” said Fort Collins-based artist Carol Schinkel. “When I was invited to participate, I saw it as an opportunity to highlight some of the less objective and more abstract art being produced in our part of Colorado. Each year interest has grown, so this year we made a video discussing our motivations and processes for making art. Experiencing a long solitary time and being able to see what has come from that is both exciting and inspiring.”

In the intimate 30-minute documentary, artists honestly recount their journeys into creativity and reveal their techniques and practices.

“The first year happened somewhat organically with different groups of artists renting galleries at Carnegie Center for Creativity in Fort Collins,” Schinkel said. “The next year, we rented the space again and divided the wall space and duties.”

Schinkel has three pieces in the show.

“My inspiration comes from working with materials, listening to music, watching for ideas to emerge,” Schinkel said. “Both of the larger pieces are transformed paintings, meaning they used to be paintings that weren’t giving me happiness so I painted over all or part of them.  The third painting is part of a project whereby each artist painted a 12-by-12 (inch) painting on the concept of connection. The resulting diverse work demonstrates the idea of different solutions to a problem.”

Schinkel’s “Giddy” almost has a psychedelic quality to it. With warm pinks and yellows, cool greens and blues and free-formed patterns, it is somewhat reminiscent of tie-dye. The viewer can explore it and likely see new images at every glance, much like the practice of cloud gazing.

“I think we are showing good works and it is fun to be a part of,” said Fort Collins-based artist Bob Coonts. “We all see differently and that in itself is exciting. I am learning so much from all of the others in the group and I’m looking forward to trying some different approaches to my work going forward.”

For Coonts, the seeds of creativity were planted early on when, as a boy, he stumbled upon a publication featuring a rebellious and revolutionary painter that took the art world by storm.

“When I was 11, in 1947, I think the time is about right, we were visiting an aunt and uncle and they subscribed to Life Magazine,” Coonts said. “I enjoyed looking at those magazines. There was the spread of Jackson Pollock’s work. That was before I knew that I had any art inclinations. I did scratching around kind of drawings in the margins of my books and Big Chief tablets, but certainly didn’t know or didn’t even desire to be an artist because I didn’t know.”

Pollack was known for his technique of pouring or splashing liquid household paint onto a horizontal surface. While his work was met with criticism by some early on, he is considered on of the most iconic abstract expressionists, and his thickly layered paintings have only skyrocketed in value with the passing of time. More than eight Pollock works have sold for over $20 million apiece at auction.

“I was impressed — I remember and I think — more with the color,” Coonts said.

Throughout his career, Coonts has often depicted creatures of the animal kingdom. From captivating rabbits to pensive felines and kaleidoscopic fish, his work pays homage to the natural world and at times provides a trippy vibe. He has painted seven variations of a bull, one of which is in the show.

Horses have often been the subject of his colorful work, as he has always had a love for the wild-maned beauties since having one at age 6.

“I can paint naturalistically or representationally, but I prefer to push the edge a bit when I paint,” Coonts said. “Each horse image that I paint I try to do this. Franz Marc, a German painter born in 1880 along with Gustav Klimt in Austria, Chuck Close, a modern day painter in New York and Heinz Edelman, a German illustrator who was responsible for the art of the movie ‘The Yellow Submarine’ have been my biggest influences, along with many others.”

Much like in the beginning of his career, Coonts can still be found putting acrylic paint to canvas late into the night.

“I love color and design and that was my career for about 35 years, as well as teaching at Colorado State University for about the same length of time,” Coonts said.

While some of the work of artists — filling the gallery walls — may spark joy, others stir up reflection.

“It has always been fun to be part of this group of artists who see the abstract world so differently,” said Victoria Kempf, a former Episcopal priest who has participated in “Driven to Abstraction” since its beginning inception.

Kempf has five pieces in the show, including “Spectre” — a somewhat haunting work that includes shadowy figures, one human-like soul with an intense glare, a range of background colors whose deep crimson conjures up thoughts of perhaps passion and rage. There’s even what appears to be a shred of newsprint written in French.

“I wish I could say what inspired each piece, but I can’t,” Kempf said. “I just begin painting. Playing with color and shapes. I wait for something to emerge and I follow where it leads me. I guess the painting decides what it wants to be. So, actually, I just give my intuition freedom to create.”

While Friday’s in-person reception is currently sold out, interested parties will have plenty of opportunity to see the work that will be on display until June 26.

“I’m drawn to the work of both Karen Bailey and Bernadette Youngquist,” LaBarre said. “Bailey’s piece ‘Connections’ is reminiscent of the mid-century abstract painter Cy Twombly, using gestural mark-making to create a visual language. Younquist’s ‘A Hold On My Heart’ combines soft and hard layers of architectural elements through color, shape and line to convey a sense of place. It is reminiscent of the paintings of Motherwell and the sculptures of Henry Moore.”