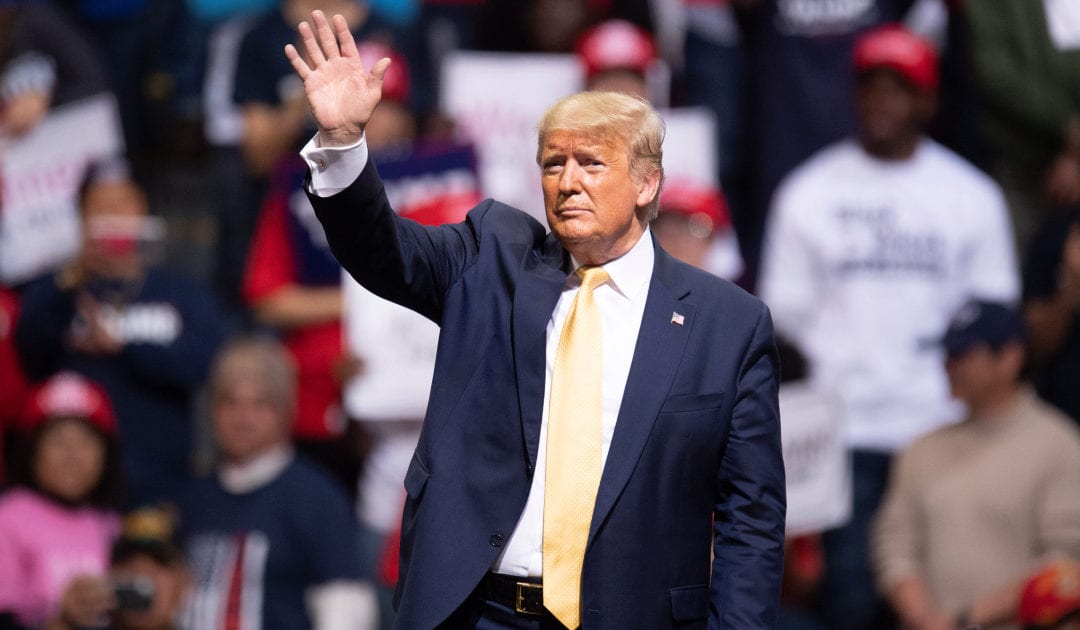 The Republican started his term with 45% approval and 44% disapproval in Colorado, one poll found, the first and only time he stood in positive territory. Since then his ratings have tumbled as voters soured on how he did his job, according to The Colorado Sun’s poll tracker. His polling average in Colorado shows him at 40% approval with disapproval near 56%.

Colorado Election 2020 Poll Tracker: How Donald Trump and Joe Biden are polling in the 2020 presidential election

To start the 2020 election year, Trump stood near his highest marks at 44% approval but he again began to slide as the coronavirus hit. Ahead of the Republican National Convention this week, his approval rating returned to below his average at 39% approval since May.

“I think it’s largely the virus and the response to the George Floyd killing,” University of Colorado Boulder political science professor Kenneth Bickers said, referring to Trump’s numbers. “I think it’s always tough for an incumbent to run when the economy is bad.”

Overall, the polling numbers analyzed by The Sun show Trump never gained traction in Colorado after losing the 2016 election in Colorado to Democrat Hillary Clinton by 5 percentage points. And now his poor numbers may impact Republicans in other races — giving Democrats a big advantage in Colorado.

It was similar conditions that led to a major blue wave two years ago, pollsters and political observers say. In 2018, a poll from Magellan Strategies in Colorado found that more than a third of voters wouldn’t vote for a Republican Party candidate because of their opinions on Trump.

How Colorado voters have ranked President Donald Trump in approval polling. Hover or click on each point to see more about each poll. Click here to visit The Sun’s Poll Tracker page.

“They should be concerned because if Trump doesn’t find his legs in this campaign and show some momentum, it could cost Republican candidates in Colorado without question, just like it did in 2018,” said David Flaherty, the CEO and founder of Magellan Strategies, a Republican-leaning polling firm in Colorado.

In a recent interview, Jefferson Thomas, Trump’s campaign director in Colorado, questioned the polling numbers and suggested they inflated potential turnout of unaffiliated voters — a point disputed by other Republican analysts who expect these independent voters to turn out in droves this November.

MORE: Colorado doesn’t appear to be a presidential swing state in 2020. That could spell big trouble for Cory Gardner.

The GOP is focused on its statewide organizing to drive support for Trump, but Democrats outnumber Republicans in Colorado and polls show unaffiliated voters dislike the president.

Samantha Zager, a Trump campaign spokeswoman, said she thinks Coloradans will change their point of view once they find out Democratic nominee Joe Biden’s position on fracking and health care. Biden said he supports a moratorium on new oil and gas drilling permits on public lands but not a complete ban on fracking. He also supports a public option for health care and lowering the eligibility age for Medicare to 60.

“President Trump has been a consistent, steady leader for the people of Colorado for over three years as he’s strengthened the economy and created jobs,” Zager said in a statement.

Neither Trump nor Biden have spent much money on campaign advertising in the state, a reflection of the fact Colorado is not a top-tier swing state leading up to November.

On the Democratic side, how Colorado voters view Biden, the former vice president, is less clear. There have been only two polls looking at his image in Colorado since he became the nominee after rival Bernie Sanders dropped out of the Democratic primary in April. An early May poll showed Biden in negative territory with higher disapproval ratings than approval. A more recent survey by Democratic firm Public Policy Polling shows him with a 46% approval and 42% disapproval.

When it comes to a head-to-head matchup against Trump, Biden has averaged a double-digit lead in Colorado since May. Two polls from late-July show him up 13 percentage points against Trump.

How Colorado voters have ranked President Donald Trump and former Vice President Joe Biden in head-to-head polling. Hover or click on each point to see more about each poll. Click here to visit The Sun’s Poll Tracker page.

“If you were casting someone who is as ‘un-Trump’ as possible — not white, not an old man, doesn’t have a problem with his treatment of women, is not racially insensitive — you would not come up with Joe Biden,” Bickers said. “But they may win just because he is not Donald Trump.”

Those June poll numbers are holding true, as Biden’s head-to-head ratings with Trump show him with more than 50% of the vote as of July 26.

Even with Biden’s solid lead in Colorado months from Election Day, the Democrat’s campaign is adding staff and ramping up efforts to win the state.

Ernie Apreza, state director for the Biden campaign, said he considers Colorado a battleground, even though the numbers are pointing toward another blue election. “We are not taking anything for granted. I was here in 2016 and we are going to work in every corner of the state,” Apreza said.

The dynamics driving Trump’s weak poll numbers in Colorado are evident to pollsters, who point to demographic changes and cemented public opinion about the president.

Flaherty at Magellan Strategies said the younger generation of voters, ages 18 to 34, are going to have a historic turnout for an unprecedented election. The social justice movements across the nation and the global pandemic this summer are taking a toll on Trump’s disapproval rating, which spiked in early June.

People are tired of criticism and the negative tone that the president’s known for and his handling of the coronavirus crisis, Flaherty said. “Where it goes from here, we’re all watching,” he added.

A wildcard is one of the newest names on the state ballot, rapper Kanye West. His campaign could lure votes away from Biden and help Trump, who is an ally of West.

Bickers thinks that if West has any momentum in the state, it would be with the younger generation. They’re a more mobile population of voters, with weaker party ties. Bickers said he hasn’t seen a surge of support for Biden among students.

With less than 70 days until Nov. 3, much could still change given the unprecedented political and social environment. But Trump is not inspiring confidence, analysts argued.

“You can see from some interviews, when he’s asked what a second term looks like and his inability to answer is pretty glaring,” Flaherty said. “There’s no Republican or Democrat nominee that hasn’t been able to answer that question in August of an election year.”

In Flaherty’s opinion, most voters have already made up their minds about who they will vote for. And Trump’s image, as reflected in Colorado polling numbers, has broader ramifications.

“He’s setting the tone for what the Republican brand is,” Flaherty said. “I think that’s more fascinating, too, because the presidential election is a closed book in our state.”