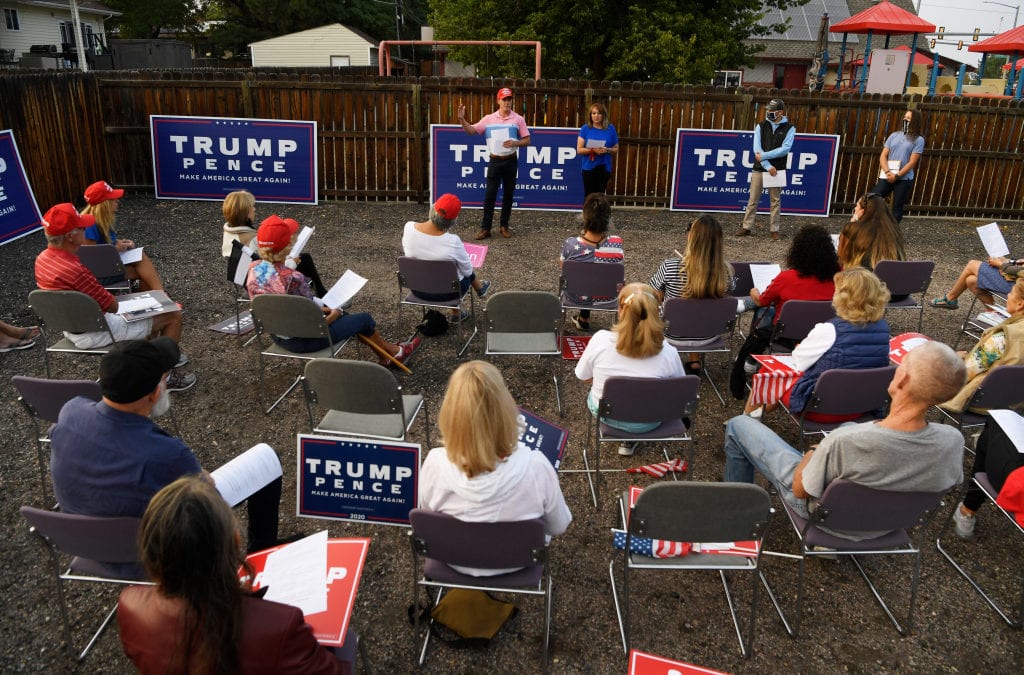 Since President Donald Trump lost Colorado by nearly 5 percentage points in 2016, its voters have taken a sharper turn away from him — leaving the state looking like an also-ran among battlegrounds this year.

But that doesn’t mean Trump and his allies have conceded Colorado. Or that former Vice President Joe Biden, his Democratic challenger, is taking it for granted. Both campaigns have marshaled impressive state operations, political observers say, with dozens of paid staffers and growing cadres of volunteers at work.

To reach millions of potential supporters during the pandemic, though, they’re taking very different approaches: Pro-Biden forces, citing safety concerns, largely have avoided the kind of robust door-knocking operations that powered Democrats to big past victories here. They are relying instead on phone-calling and texting, along with online events, in an unprecedented way.

The Trump Victory operation, meanwhile, has doubled down on in-person canvassing since resuming it in mid-June, as Colorado’s initial surge of COVID-19 cases subsided. It also got a big jump-start on the Biden campaign, which first had to win the Democratic primary. Amid the pandemic’s uncertainty, Biden’s camp waited until mid-summer to staff up a Colorado general-election operation.

But Republicans know they have an uphill climb.

“Obviously, the race is what it is here,” said Josh Penry, a former state lawmaker and longtime Republican strategist. “Colorado is younger, more progressive, and the president has not fared well here — in what is probably an understatement.”

Even as Trump’s campaign and the Republican National Committee maintain that they’re fighting to win Colorado’s nine electoral votes on Nov. 3, they have plenty of other reasons to care about Colorado. That starts with the fate of Sen. Cory Gardner, the first-term Republican trying to fend off a challenge from former Gov. John Hickenlooper.

“If you’re the White House, and if you win, you probably don’t win because of Colorado. But you do want a Republican Senate,” Penry said — and control of that chamber of Congress hangs in the balance.

The dynamic cuts the other way for Biden, with Hickenlooper likely key to a Democratic takeover. Both presidential campaigns’ state operations include close coordination with the Senate campaigns.

Gardner’s best shot at winning is for Republicans to keep the margin narrow in the presidential race, GOP observers say.

“The down-ballot impact of Trump is something that we’ve already seen — he has very much poisoned the Republican brand as a whole in Colorado,” said Laura Chapin, a Democratic strategist in Denver. “This is not just me saying this,” she said, referencing a poll of unaffiliated Colorado voters conducted after the 2018 midterm elections by Louisville-based Magellan Strategies, a Republican firm.

Magellan found that unaffiliated voters broke by huge margins for Democrats, and they did so largely because of Trump. It doesn’t help that Colorado has large proportions of suburban and highly educated voters, who have leaned more Democratic elsewhere, too.

The pollster said then that the results offered a big warning sign for Republicans in 2020.

So far, public polling has borne that out. The Colorado polling average on the website FiveThirtyEight has Biden up by nearly 10 percentage points, 51% to 41% — even after the race has narrowed in the last two months. All but one of five polls released so far in September showed Biden maintaining a double-digit lead here.

It’s unclear if the candidates will drop into Colorado before November. The last time either visited Colorado was February, when Trump headlined a rally in Colorado Springs and Biden dropped into Denver for a fundraiser. Biden did take part Thursday in a virtual Colorado fundraiser with Gov. Jared Polis, U.S. Sen. Michael Bennet and former Interior Secretary Ken Salazar, among others.

Jill Biden, lower left, the wife of Democratic presidential nominee Joe Biden, takes part in a virtual live-streamed event with Colorado working mothers on Sept. 18, 2020, from her home in Delaware. “I’m so angry that what my family and so many families are going through could have been avoided or mitigated,” Madeline Cohen, a Boulder attorney, top right, told Biden about the coronavirus pandemic.

It’s opened a dozen field offices around the state, including a Latinos for Trump office in Pueblo County that is attempting to repeat his surprise narrow victory last time in that blue-collar, traditionally Democratic stronghold. It’s recruited an army of enthusiastic volunteers who have contacted voters 4 million times — including repeated contacts — by phone and on doorsteps, say campaign officials. They emphasize that canvass volunteers are told to wear masks, stand back and defer to each voter’s wishes.

“We’ll hit our 1 millionth door on Saturday,” Trump Victory regional spokesman Keith Schipper said last week. The tally includes unanswered doors, which result in campaign materials left behind. “It’s a heavy investment in Colorado this cycle. We’re doubling our metrics compared to what we did the last presidential cycle.”

Schipper and Republicans involved in other races said their voters, along with many unaffiliated ones, are particularly hungry for interaction these days.

Schipper argued the campaign is “in a fantastic spot for Colorado to be delivered for Republicans.” The campaign’s volunteers emphasize that Trump has kept campaign promises and signed the Great American Outdoors Act, which was co-sponsored by Gardner.

There’s also “the economy and law and order — there was some unrest in Denver a few weeks ago,” Schipper said, and that point resonates with some voters.

But given some surprises in Colorado last time — notably Trump’s narrow Pueblo victory — Apreza said the campaign is “really focused on doing the work we need to do to guarantee we have a victory by Nov. 3.” He served as deputy communications director for Hillary Clinton’s campaign in Colorado four years ago and was Nevada state director ahead of the primaries for Kamala Harris, now Biden’s running mate.

He, too, considers door-knocking to be “the gold standard” of campaigning in Colorado in normal times. But Apreza says he’s confident in the alternatives.

“We have found phone calls and texting to be particularly effective this year,” he said, with voters more likely to pick up their phone or respond than in past campaigns. In less than two months, he said, the campaign has counted more than 2 million “meaningful conversations” conducted via those methods.

Instead of office events that might draw a few dozen, the campaign has ramped up daily online Zoom events tailored to particular groups or places in Colorado. Apreza says the streams often draw hundreds of live viewers, plus more who watch recordings later. Recent ones, featuring local and national surrogates, have focused on working moms, African Americans, Latinos, high school students and veterans, among other groups.

Are Democrats making a mistake?

Political scientists and campaign consultants long have debated the value of block-by-block canvassing at the top of the ticket, even as campaigns have grown more sophisticated in which voters they target. Penry says door-knocking may make a difference, but only in the closest of races.

“You’re seeing the Biden campaign change the way campaigns are run to suit the circumstances — and that means meeting voters where they are” during the pandemic, said Craig Hughes, a veteran Democratic strategist who advised Bennet’s presidential primary run.

Still, GOP strategist Tyler Sandberg, who’s working this fall on legislative races, calls the Biden decision “a huge mistake” — a missed opportunity to pick up on unexpected dynamics and learn how messages land with different types of voters, who increasingly get their news from fractured media sources.

Apreza allows that “I wouldn’t be doing my job if I weren’t a little bit paranoid about a number of different things.” But he’s confident the Biden campaign will reach all corners of Colorado, even if virtually.

“Is it going to look different? Absolutely,” he said. “This is an unprecedented way of doing campaign work.”

While most unions and other Democratic allies also are holding back on door-knocking, some Colorado Democrats have resumed the activity in recent weeks. Among them are state legislative candidates in swing districts who need to build name recognition to win.

“I went out and canvassed the other day, and I felt like everyone was comfortable,” said Rep. Lisa Cutter, who faces Republican Donald Rosier in her re-election bid in Jefferson County.

But she sees less reason for presidential campaigns to follow suit, since they rely heavily on TV ads. She’s noticed that voters’ preferences already seem set for top races.

“I don’t know how personal conversations are really going to help — people are already having those conversations with their friends and neighbors,” Cutter said.