Does Pacific Bell’s “The Rain Children” Look Familiar? – The Retroist 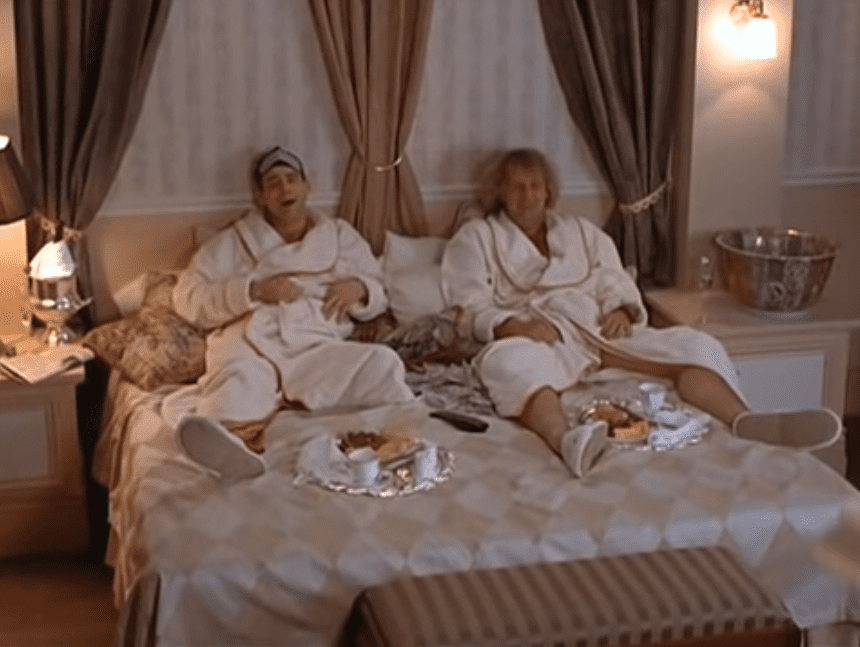 Admit it, you remember the scene in “Dumb and Dumber” when Harry and Lloyd cry over a commercial. Now, find out the story behind that commercial – a “miniseries”-style advertising campaign for Pacific Bell called “The Rain Children”!

That Overly Dramatic Crying Scene in Dumb and Dumber

We all remember that so-ridiculous-it’s-hilarious moment in Dumb and Dumber when Harry and Lloyd, having just discovered their windfall of cash inside a Samsonite briefcase, are emotional hot messes over what appears to be a movie…

…but turns out to be a commercial for California-based phone company Pacific Bell.

In case you need a refresher…

Indeed, we all laughed about the overly dramatic reaction of two brainless wonders sobbing over two children and their uncle walking toward a farmhouse while a voiceover of the girl asks her brother “do you think he’ll let us stay?” and the conversation that folds after it.

Not having grown up on the west coast, I didn’t understand the whole scene, thinking it was a movie.

And as it turns out, that was Pacific Bell’s aim, due to their earlier success with a year-long campaign called “Garland,” about two men and the woman they both love. I only just found out that exists, so I’ll cover that next time.

But for now, “The Rain Children,” as the series is titled.

“The Rain Children” aired as a “miniseries” advertising campaign by Pacific Bell beginning in February 1988, and continued through August of that year (source: New York Times). The commercial series is the story of a brother and sister, Nick and Lucy, whose mother died. The two made their way to their Uncle Forrest’s barn, and the story unfolds as the two children (played by Jonathan Brandis and Jaclyn Bernstein) attempt to stay together despite the odds.

Sappy and sentimental, yes, but a nice story with a movie-style ending, its purpose to remind people to stay connected to the ones they care about the most by using the phone…and by subscribing to Pacific Bell.

“The Rain Children” was the product of San Francisco advertising firm
Foote, Cone & Belding, as written by Creative Director Robert Black. The product in both miniseries was a soft-sell (a method of salesmanship or advertising that uses subtle persuasion), with each chapter in the continuing story ending with the subjects as adults talking on the phone, then identifying the product it was selling.

San Francisco-based Pacific Bell (formerly Pacific Telephone and Telegraph), which had been owned by AT&T from 1906 until 1984, provided phone service to California, and extended its reach to Northern Idaho, Washington, and Oregon (which was split off in 1961 to Pacific Northwest Bell). By the early 1980s, Pacific Bell was the least profitable of AT&T’s “Baby Bells,” and by 1984, their association with AT&T ended when the “Bells” were broken up (their association would resume in 1997).

By the mid-1980s, these commercials were used to establish Pacific Bell’s identity among the competition post-AT&T breakup. They started their miniseries commercials with “Garland” in 1986, and after that ended in 1987, “The Rain Children” began a few months later.

“The Rain Children,” As It Was Meant To Be Seen!

Check out the ongoing story of Lucy and Nick, trying to stay together despite the odds – “the odds” being The System and their gruff Uncle Forrest.

Beautiful and touching in a way every sappy Hallmark Hall of Fame movie is. I still find it hard to believe this wasn’t an actual movie, if only a TV Movie of the Week.

Who didn’t feel like Harry and Lloyd watching this?

And how did they watch it, if they were in Aspen, Colorado and Pacific Bell didn’t provide phone service in Colorado?

One of life’s little mysteries, I suppose.

Allison is a Secretary by day, a writer/blogger by night (and during lunch breaks and in the mornings before work), a nostalgia geek (and a geek in general), worshipper of Thor (and Chris Hemsworth), and honorary Avenger (she has a pin, so it is official).She collects Itty Bittys and Funko Pops, loves anything that takes her back to childhood, and has confessed her love for Kenny Loggins.Oh, and she listens to Chicago…alot.If any of this piques your interest, she’d love for you to visit her personal blog, Allison’s Written Words, where she talks about alot of the same stuff she talks about here, and more!