Doctors are overwhelmed by coronavirus. So why did Colorado officials just end a 30-year contract with a peer health program? 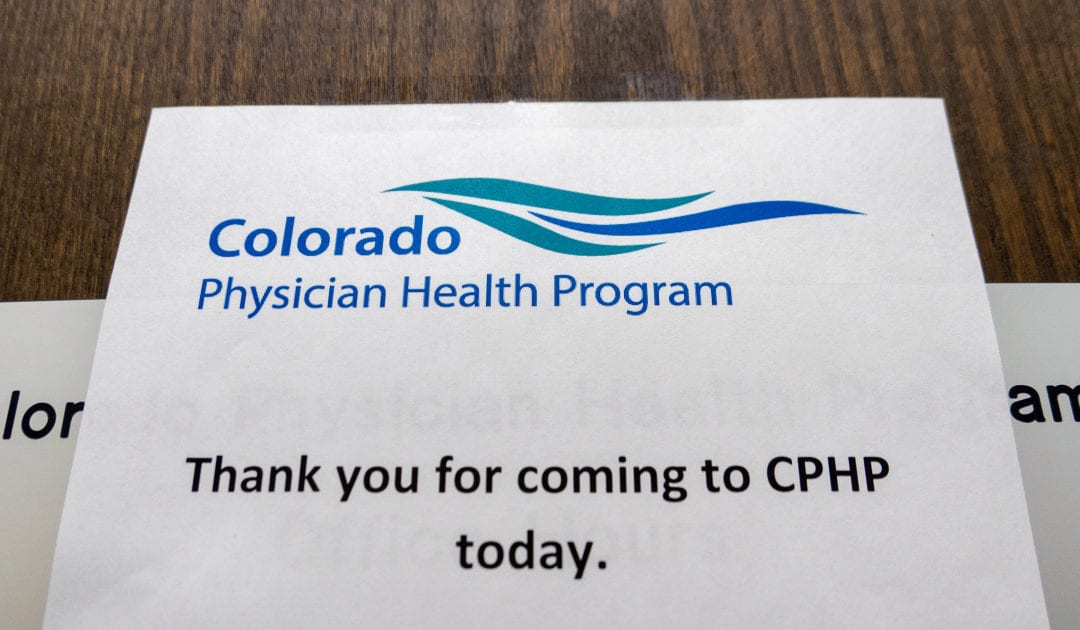 For more than 30 years, one agency has monitored Colorado physicians struggling with depression, alcohol or drug abuse, physical conditions and behavior problems — doctors seeking help so they can continue to see patients.

The Colorado Physician Health Program, which formed in 1986, has evaluated more than 5,600 doctors for problems ranging from overwhelming sadness over the death of a patient, to the first tremors of Parkinson’s disease, to alcohol abuse that led to inappropriate sexual advances toward a colleague or patient.

About one-quarter of the physicians who walk into the Denver office are either ordered to do so by the Colorado Medical Board, based on complaints brought to the board, or required to go by their hospital or office supervisor. The rest go voluntarily or, in the case of at least one Colorado doctor, are brought by a spouse out of fear they might take their own life.

The doctors’ medical and mental health issues are kept in confidence if they sought help on their own accord, and are not reported to the board unless they rise to the level of putting patients in danger. The goal is that doctors will seek treatment before they’ve caused harm and without fear that the board will suspend or revoke their licenses and tarnish their careers. The program is funded by medical license fees collected by the state.

It’s a system that has built up trust among doctors for three decades, and one that other states have modeled.

But this summer, state officials ended their contract with the Physician Health Program. Instead, the Colorado Department of Regulatory Agencies awarded the contract to Peer Assistance Services, which provides evaluation and monitoring of nurses, and does not — at the time of its application — have physicians on staff. It was the first time Peer Assistance Services had applied.

This contract switch happened so quietly that the Colorado Medical Board, which is housed within the Department of Regulatory Agencies and for decades has managed the contract, did not know about the change until it was done.

An appeals hearing on the award held last week in the state Department of Personnel and Administration was not publicly posted and no members of the media or the public were allowed to attend. The Colorado Sun filed three requests under the Colorado Open Records Act to try to piece together what was documented about the contract negotiations and the resulting backlash.

Dr. Don Lefkowits, president of the Colorado Medical Board and a retired emergency department physician who spent 40 years at Rose Medical Center, found out about the new contract via email in July, he said during a board meeting last month.

Lefkowits said he was “puzzled and distressed” by the decision, in part because board members were left out of the conversation and had no opportunity to “question the possible adverse effects on the board’s effort to fulfill its mission to protect public safety.”

Contractor accused of “poisoning the well”

The worry is that doctors — including those overwhelmed by fears for their own health and the death of patients during the coronavirus pandemic — will avoid seeking treatment, putting patients at risk of harm. Hundreds of letters saying as much have flooded the governor’s office and the state Department of Regulatory Agencies, sent by doctors and medical students as word of the change has spread through the medical community.

One of their main concerns is that the new contract does not offer “peer” treatment — doctors want to get care and advice from other doctors, meaning psychiatrists, not counselors or therapists without doctor of medicine degrees.

The other key issue is deeper. Doctors are concerned that the new contractor, Peer Assistance Services, will not provide the same cover of confidentiality as they’ve come to trust in the current program, creating a chilling effect on getting treatment.

The new contract agreement says doctors, just like nurses, will have to sign a release of information to the state medical board even when they seek help voluntarily. The state required that the contractor obtain signatures from doctors that would authorize release of health information “in connection with an investigation, disciplinary action, or other purposes authorized by statute.”

Colorado Medical Society President David Markenson wrote to the society’s members that “patient care in Colorado will be compromised if physicians’ ability to seek confidential, effective support and treatment is removed.” The society is asking the state to reinstate its contract with the Colorado Physician Health Program.

State officials, represented by a lawyer from the Colorado Attorney General’s Office, counter that the Physician Health Program is “poisoning the well” by scaring doctors into thinking they will no longer have confidentiality. The “strategic and disingenuous effort” is an attempt to undermine the agency that just won the contract, first assistant attorney general Ashley Moller wrote in response to the program’s appeal.

The “appeal demonstrates a strong sense of entitlement to this contract,” Moller wrote. “But private entities are not entitled to state contracts merely because they have held them before.”

Neither the Colorado Physician Health Program nor Peer Assistance Services would comment for this story, both citing the ongoing appeal.

Now is not the time to “experiment with an untested and unproven agency,” Lefkowits said in his remarks to the medical board.

“There is little doubt that we are now at a moment in history as stressful to the physical and mental health and well-being of our providers across our state as we have ever experienced,” he said. “Fortunately, in Colorado, we have a strong system of peer-health assistance that successfully supports our licensees when they face personal behavioral and physical health challenges while still protecting public safety. Now, more than ever, we owe them that.”

A key question at the center of the appeal is whether the Department of Regulatory Agencies had authority to essentially fire the long-time contractor and hire a new one without involving the Colorado Medical Board.

State statute says the “board shall select one or more peer-health assistance programs as designated providers.”

And according to past and current board members, the medical board has managed the contract with the Colorado Physicians Health Program over the decades. Only once prior to this year, back in the 1990s, did any other entity apply.

But the attorney general’s office argues that the department had full authority to procure the new contract, noting that “all rights, powers, duties and authority relating to the procurement of services are vested in the department.”

In an email exchange between DORA Profession and Occupations Director Ronne Hines and former medical board member and former state Sen. Irene Aguilar, Hines said that while the medical board is “authorized” to select a peer-health assistance program, her division is “responsible for procuring and managing contracts for its agencies.”

Several doctors told The Colorado Sun that regardless of whether the department had authority to exclude the board, they are still wondering why it did.

Aguilar said she worries that a change in the program, especially in the midst of the pandemic, will harm not just doctors but their patients across the state, because doctors will stop asking for help. Doctors are stressed about treating patients with COVID-19, worried about the contagious disease themselves and have been under financial stress as patients have avoided going to appointments and canceled surgeries during the pandemic.

“To me, this is advocating for both the medical providers and for patients,” Aguilar said in an interview. “People will err on the side of taking chances. We really don’t want to do that to our patients in Colorado. We don’t want to put them at any unnecessary risk.”

Aguilar said she supports a change in law that would ensure nurses have the same confidentiality.

The health program is now monitoring about 500 physicians, which can include drug testing and counseling. The program collects more than $3 million in fees every other year when physicians renew their medical licenses. It has five psychiatrists on staff.

The state called for requests for proposals for the peer program in August 2019, and a DORA committee evaluated the two responses. Colorado Physicians Health Program received 743 points, while Peer Assistance Services won with 754 points, according to a June 22 award recommendation.

Listed under the long-time contractor’s weaknesses: the health program said that if a doctor seeking evaluation refused to sign a waiver of confidentiality, it would use a committee to determine whether a report to the medical board was necessary.

The new contractor, meanwhile, said it would require a signed confidentiality agreement that explains the “limits of confidentiality” and a release of information to the medical board before proceeding with an evaluation.

Conflict between the state department and the Colorado Physician Health Program regarding the rules of confidentiality goes back to 2018.

That year, the health program was the sole bidder to the state’s request for proposals to operate the doctor peer-assistance program. The Department of Regulatory Agencies termed the health program “nonresponsive” because it refused to comply with a requirement that “all client records would become the state’s property and all program participants would be mandated to sign a release of information to the board,” according to a letter to DORA from the health program’s attorney.

The medical board and the health program then created a “liaison committee” to review cases in the gray area between requiring a report to the board and not.

Some cases are clear cut. If a doctor is charged with a DUI, or stole opioids from work, the board must be notified. The board is also notified if a doctor is putting patients at risk or is not following the treatment plan developed by the Physician Health Program.

When the decision isn’t obvious, the liaison committee — which includes members from the Physician Health Program and the medical board — discusses details of the cases without using names. The board reviews about eight to 12 such cases per month.

The Physician Health Program has been protesting the contract award since early July, a process that culminated in the two-hour, closed hearing last week before a hearing officer in the state Department of Personnel and Administration. The officer has until Oct. 16 to decide whether to overturn or uphold the contract decision.

As of now, the new contractor is expected to take over physician evaluations and treatment on Nov. 1.

In a letter to Gov. Jared Polis, former medical board member and addiction psychiatrist Dr. Jane Kennedy praised the current program as “true peer assistance,” noting that while 76% of doctors are voluntary participants in the program, just 13% of participants in Peer Assistance Services are voluntary referrals.

“For some reason, there has been a recent effort to expose (and punish?) physicians who may need and want help,” Kennedy wrote. “Please do not let Colorado make this mistake.”