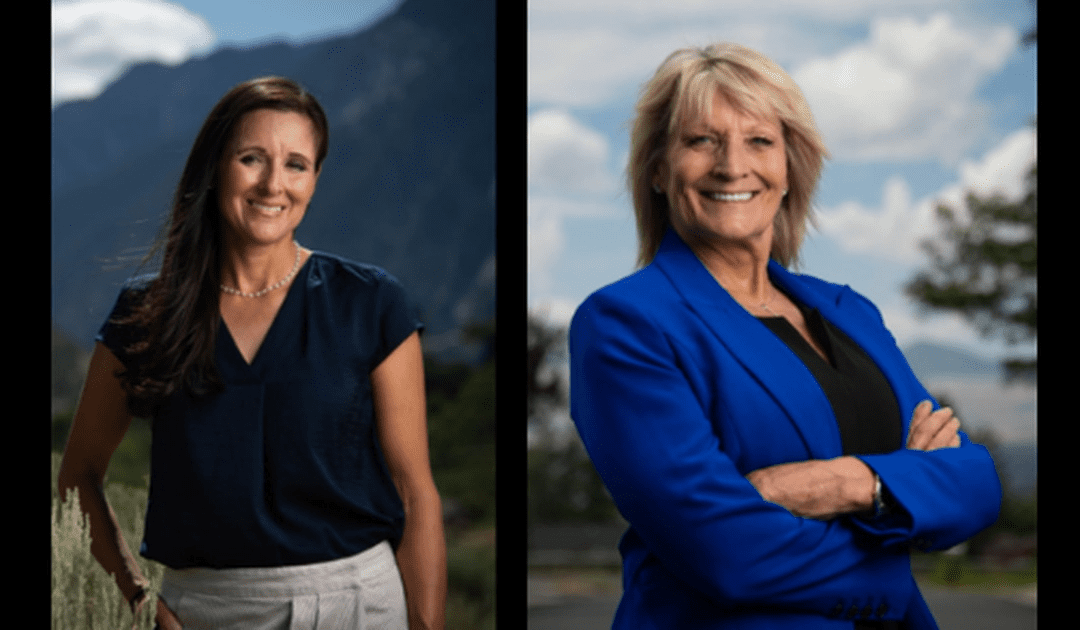 Both general election candidates said that as they canvassed during the primaries, residents said they had no idea who the incumbent was.

“I appreciate his service, but at the same time, he has faded in his role as council member in our district,” Theodore said. “That’s the vibe I received.”

Hrechkosy (pronounced “her-wreck-uh-see”) said as she’s knocked on doors during her campaign – wearing gloves and a face mask – she found most people didn’t know Burdick’s name, despite his long years of service and current role as chairman.

“There was no name recognition, no reaching out to his community or his constituents,” she said.

District 6 includes Sandy, Draper, parts of Cottonwood Heights, Midvale, and points east, including the towns of Alta and Brighton. Although neither candidate for the district has held elected office before, they both point to background experience that they say uniquely qualifies them for a seat on the County Council.

Theodore has a biology degree from the University of Utah, which she said trained her to pay close attention to detail. She has made water quality a key plank in her campaign platform, and worries about potential contamination to the county’s water supply from past mining activities in the Wasatch canyons.

“I’ve had people contact me randomly over the years asking me questions about water, a lot of different issues,” Theodore said. “Water has continuously come up.”

Theodore also has experience working part-time for local schools and volunteering on an open space committee working on improving Quail Hollow Park. She ran an unsuccessful campaign for Sandy City Council in 2017 and currently serves as a Republican state delegate.

Hrechkosy retired after a three-decade career working for the State of Utah. She got her start in the Office of Recovery Services and later worked with Adult Probation and Parole. She has volunteered with Voices for Utah Children and is a current member of the Utah Women’s Forum.

“I’ve learned to work with groups,” Hrechkosy said. “If you don’t know how to work with other groups and come to an agreement and bring them all to the table … you’re kind of out in the cold.”

Both candidates are residents of Sandy.

The largest issue looming over the general election is the coronavirus pandemic. Leaders of Salt Lake County, which has about 50% of statewide cases, has played a pivotal role in managing the contagion, from business shutdowns to infection tracking to its ongoing mask mandate.

Hrechkosy said she is impressed with the county’s response to the pandemic. She looks at the county’s online COVID-19 Data Dashboard daily. She pointed to recent data that shows a correlation between falling COVID-19 cases and the county’s face mask requirement. Hrechkosy also said that while required business closures over the spring negatively impacted many companies, it was ultimately the right call.

“I know a lot of them may be shuttered for good,” she said. “Restaurants, boutique businesses may never open again. That hurts our economy, it hurts our citizens. But I don’t know that there was a choice.”

Theodore had a less than glowing evaluation of the county’s coronavirus response.

“I think it has actually instilled a lot of fear in residents and business owners,” Theodore said. “With the residents I’ve spoken to, they feel like the county has mismanaged a lot of issues.”

One of the county’s biggest blunders, Theodore said, was posting personal health information online after residents took tests for COVID-19. Thousands of test results linked to those residents’ home addresses remained online for five days before the Salt Lake County Health Department took it off its dashboard in June, according to a FOX 13 report.

“That’s a big concern as far as our safety and privacy goes,” Theodore said. “And it can open up the county to legal action.”

Theodore is also not in favor of a mask mandate, although she supports the science showing masks can slow the spread of COVID-19, including a recent study from Brigham Young University on the issue.

“There are people out there who just can’t wear a mask,” she said. “But I think if we can all work together and slow the spread, I’m all for that. I wear mine.”

Theodore is also critical of the county’s recent property tax hike. The council approved a 7.8% tax increase , an impact of $30.36 per year for an average family, in a 7-2 vote in December. Burdick, a Republican, was among the council members voting in favor. Theodore’s campaign website calls the county budget “bloated.”

“We can’t spend like we have in the past,” she said, adding that she’d heard from multiple District 6 voters about the issue, including “how they couldn’t afford it now that people are without jobs and worried about their future.”

Hrechkosy said she, too, is opposed to any future tax increases.

“I felt it. I felt it big time,” she said of last year’s change. “I’m on a fixed income. I had to rearrange my entire budget.”

The candidate acknowledged there are nuances to the county budget that most residents may not understand as well as council members. If elected, Hrechkosy said she plans to closely study county finances.

“We need to be very, very careful with money as a county government,” she said. “It’s not our money, it’s our taxpayers’ money and we need to be good stewards.”

District 6 includes both Big and Little Cottonwood canyons, and both candidates said they’re worried about congestion in the popular recreation areas.

The Utah Department of Transportation is currently evaluating proposals to improve traffic in Little Cottonwood Canyon. The potential solutions include a gondola to the Alta and Snowbird ski areas as well as increased bus service.

Hrechkosy said she’s waiting for UDOT to complete environmental impact studies on the plans before she takes a position. But she has fielded many concerns about the associated widening of Wasatch Boulevard.

“It will affect some property owners. They think it takes away the beauty of what they already have, they’d hate to see it become a major thoroughfare,” Hrechkosy said.

While she acknowledged the county might ultimately not have much sway over the traffic improvement decisions, Hrechkosy intends to ensure the public is given more information about big projects and developments early on in the planning process.

“Sometimes the citizens don’t find out about public input [opportunities] until it’s too late,” Hrechkosy said.

As an avid skier, and with her biology background, Theodore said she’s keenly interested in the canyons. She’s also weighing all the options to improve traffic in Little Cottonwood Canyon.

“It’s going to cost a lot of money, we have to get it right. You’re always going to make someone mad in the process,” she said. “I also think solutions are desperately needed.”

The candidates said they take air quality seriously as well, which they see as intrinsically tied to traffic.

Theodore said she fears the pandemic will dissuade more people from taking public transportation at the exact time county leaders are encouraging more bus and train use to relieve traffic and air quality concerns.

“That’s going to be challenging, but I think we can do it,” she said. “[Even] if we need to up the service, perhaps, I think public transportation needs to be accessible to everybody.”

The Utah Transit Authority recently announced it will restore service to a level about 90% of what it was before pandemic cutbacks. Still agency officials fear a “new normal” for ridership, down about 15% from previously.

The candidate also supports educational campaigns to prevent people from idling at schools and drive-thrus. She said the pandemic has demonstrated the benefits of telework, as air quality improved while commuters stayed home.

“Our air quality was good during that time when people were home. That could play a huge factor,” Theodore said.

Hrechkosy agreed that the pandemic demonstrated the impact of vehicles on the Wasatch Front airshed. But instead of promoting telework, the candidate said she wants to provide incentives for people to buy electric vehicles and yard tools. She also wants the county to update its own vehicles to lower-emission models.

“Our fleet vehicles are aging. We need to put money where our mouth is,” she said. “We need to be the leaders, we need to show the way.”

Two issues that particularly flared up over the summer are racial discrimination and police violence. Demonstrators gathered throughout the county, especially in downtown Salt Lake City, to call for law enforcement reform, some going as far as to demand defunding the police.

Salt Lake County Sheriff Rosie Rivera, a Democrat, has endorsed Hrechkosy, and the candidate said the sheriff is the right person to lead on law enforcement reforms.

“We, in Salt Lake County, are so blessed to have a woman of color running our Sheriff’s Department and Unified Police Department,” Hrechkosy said. “I think she brings a perspective to the agency that other agencies around the state and country do not have.”

“Is it moving money to other departments? It might be. Or is it moving some of those people into law enforcement? It might be,” she said. “I think we’re asking our officers to do too much.”

Theodore would like to create more liaisons to connect government with minority and underrepresented communities.

“Not everyone can go into a community that’s struggling or underprivileged and relate to what’s going on,” she said.

The candidate said she supports the police, but she also supports more education and training.

“We have some interesting times and more delicate and tense situations,” Theodore said. “I don’t know firsthand if our police [training] has prepared them for what is going on in our city.”