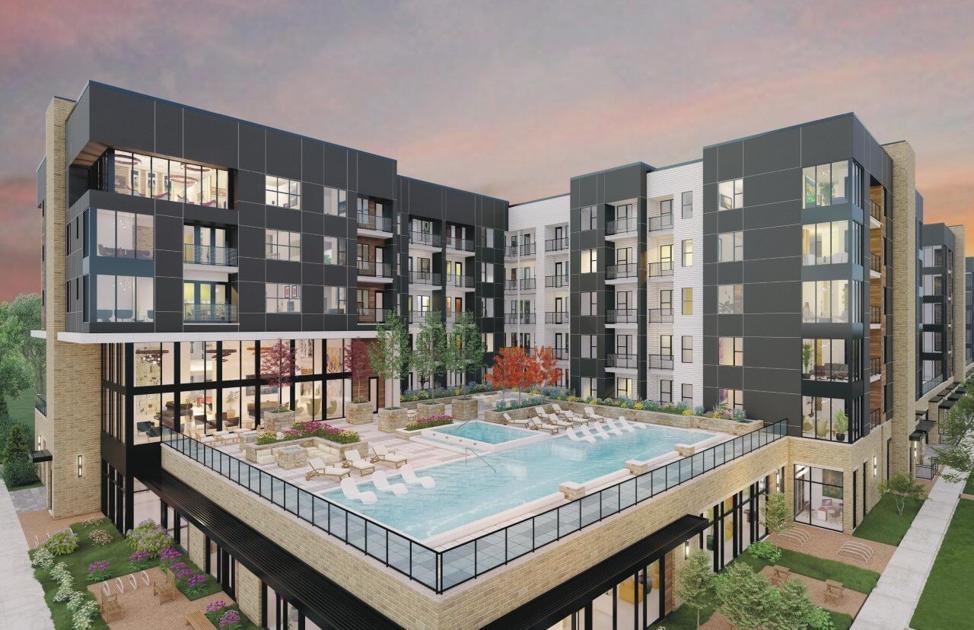 One of the nation’s largest apartment developers has moved ahead with two projects that will add nearly 600 units in downtown Colorado Springs — completing the purchase of a site for one, continuing construction on the other and assigning names to each.

The roughly 2.3-acre Weber-and-Cimarron site includes two former Salvation Army buildings in the 500 block of South Weber and the old Elks Lodge building in the 300 block of East Cimarron, according to land records. The property was acquired from Weber Street Investments, a local investment group.

A proposal that Greystar submitted last fall to city government planners shows the Salvation Army and Elks Lodge buildings will be demolished to make way for a five-story, 277-unit apartment complex.

A construction crew works to replace a utility line last week on property southeast of Weber and Cimarron streets in downtown Colorado Springs, where Greystar Real Estate Partners of Charleston, S.C., plans to construct a 277-unit apartment complex. A former Salvation Army building in the background will be torn down as part of the project. RICH LADEN, THE GAZETTE

No demolition work appears to have begun at the site yet, but construction crews last week were relocating a sewer line and had closed off Cimarron on the property’s north side while the work was underway.

Greystar and Origin Investments recently announced that the project will be named “Ensley” after Elizabeth Piper Ensley.

A 2020 History Colorado online post described Ensley as an African American educator, activist and early 20th century suffragist who moved to Denver in the 1890s. She was inducted posthumously into the Colorado Women’s Hall of Fame.

Ensley will offer studio, one- and two-bedroom units of 480 to 1,298 square feet. Amenities will include a co-working area, fitness center and movement studio, pool, bike storage and wash area. A six-story, 325-stall parking garage will connect to the apartments via three pedestrian bridges.

A rendering shows “Ensley,” a five-story, 277-unit apartment project that’s planned southeast of Weber and Cimarron streets in downtown Colorado Springs by Greystar Real Estate Partners of Charleston S.C. and Origin Investments of Chicago. Two former Salvation Army buildings in the 500 block of South Weber and the old Elks Lodge building in the 300 block of East Cimarron will be torn down to make way for the apartment project. COURTESY RENDERING

“The community, which offers an amenity rich lifestyle in Colorado Springs’ busy urban center as well as easy access to the area’s abundant outdoor recreational options, is slated for completion in 2023,” according to a Greystar and Origin news release.

At Pikes Peak and Wahsatch, a U.S Bank building and drive-thru and a building that housed the Pikes Peak Post 4051 Veterans of Foreign Wars have been razed.

In their place, Greystar and Origin have launched construction of a six-story, 321-unit complex and a 380-space parking garage.

Originally called Elan at Pikes Peak, the project now will be known as “Fiona.” The name will “capture the region’s seasonal beauty and vibrant community spirit,” according to Greystar and Origin.

“Fiona,” the companies say in a news release, “is derived from the Scottish Gaelic word for ‘vine,’ and reflects the community’s warm, welcoming elegance and the growth occurring within Colorado Springs as new industry and residents move into the area.”

Similar to Ensley, Fiona will have a mix of studio, one-bedroom and two- bedroom apartments, ranging from 480 to 1,368 square feet. It’s slated to open in mid-2023.

Apartments at Ensley and Fiona will rent for market rates and start at $1,280, according to Greystar and Origin. In the second quarter, Colorado Springs rents averaged nearly $1,430 a month, according to a recent University of Denver report.

The projects add to an explosion of new apartments, condos and lofts that are open, under construction or planned in downtown Colorado Springs, which had gone for decades without new housing until about five years ago.

Since then, downtown has seen the opening of more than 400 apartments at 333 ECO, The Mae on Cascade, Blue Dot Place and Casa Mundi.

Two additional projects — Pikes Peak Plaza and the 322 Vermijo Apartments — are under construction and will add about 380 units, while a suburban Seattle apartment developer plans upward of 1,200 units near a downtown multi-use stadium that opened this year.