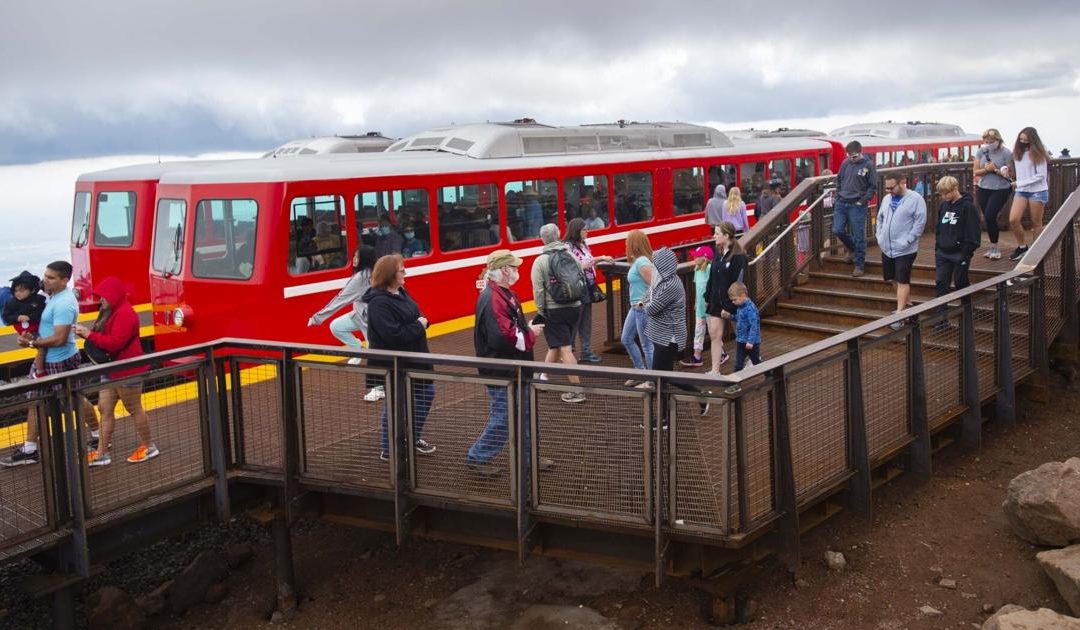 Doug Price, CEO of Visit Colorado Springs, said you can credit the March arrival of Southwest Airlines at the Colorado Springs Airport for boosting visitor numbers to historic levels. Air travelers tend to stay in the same city where they arrive, and many more have been arriving in Colorado Springs rather than through Denver International Airport since the low-fare giant began operating 13 daily flights to five of its major hubs.

“People who fly into a city spend more, and the farther away you are from home, the more you spend,” Price said.

That’s a big deal for the local tourism industry because overnight visitors spend four times as much as those making day trips — at hotels, restaurants, retailers, tourist attractions and other businesses. That in turn has fueled a surge in sales tax revenue for the city of Colorado Springs, which reported record collections in July (representing June sales) from its 2% general sales tax and from its special tax on hotel rooms and rental cars paid almost entirely by visitors.

Colorado Springs has consistently ranked among the top destinations in Colorado for hotel occupancy and other tourism industry measures, well ahead of the Denver metro area and most other Front Range cities. While Denver is recovering, hotel occupancy and visitor numbers still remain significantly below levels reached in 2019, before the pandemic slowed the nation’s tourism industry to a crawl in early 2020.

By just about any measuring stick, this summer tourism season in the Pikes Peak region has been among the best — revenue from the lodger’s and auto rental tax more than tripled the same month a year earlier in May, June and July and also was higher than the same months in June and July 2019.

Hotel occupancy in April, May, June and July was way ahead of last year’s levels for the same months and just slightly behind 2019 levels — and the June and July occupancy were the nation’s third and second best, according to hotel research firm STR.

Those remarkable numbers began with Southwest’s first full month of flights, got stronger with the return of The Broadmoor Manitou and Pikes Peak Cog Railway in May and the opening of the Pikes Peak Summit Visitors Center in June.

Price said all played a major role in attracting visitors to the region, along with the city’s 150th anniversary celebration and many area attractions operating at near or full capacity for the first time since the pandemic began. Led by Southwest, passenger numbers at the Colorado Springs Airport surged to a 16-year high in July.

“We are seeing the benefit of more than $1 billion invested in our tourism industry in recent years,” Price said, including the rebuilding of the Cog Railway, construction of the new summit house, the U.S. Olympic & Paralympic Museum, Weidner Field and the Bartolin Hall exhibition center at The Broadmoor along with dozens of new hotels all around the city. As more hotels and a Air Force Academy visitors center open, he is optimistic the rebound will continue to gain strength.

Nearly all of those visitors are families and individuals because business travel remains a fraction of what it had been before the pandemic. Ann Alba, president of the Pikes Peak Lodging Association, said the boom in leisure travel has helped to offset much of the drop in business travel. She has been “pleasantly surprised” how quickly and to what extent the hotel industry has been able to recover from the pandemic.

For the rest of the state, and metro Denver, the recovery continued — but not yet near the historic highs the 2019 summer tourism season brought.

“While tourism is recovering well, we are far from the high of 2019. July travel spending shows the first positive travel spending gains since February 2020, up 1%,” said Colorado Tourism Office Director Timothy Wolfe via email.

Before the pandemic shut down most travel and devastated the tourism industry in 2020, Colorado had posted a record 86.9 million visitors, up 2% from the previous year.

Those visitors spent $2.4 billion in 2019, up 7.3% year-over-year. That was well above the national average increase of 4.3%, according to the tourism office.

While all the data from summer tourism season is not yet available, Wolfe predicted the numbers would improve.

“We are optimistic about a strong summer tourism season when full data is available, despite the uncertainty surrounding the delta variant. Colorado remains a popular destination for those looking for socially distanced activities and travel, something that is synonymous with Colorado’s great outdoors,” he said.

“We continue to see that while many of our mountain destinations are returning to pre-pandemic levels from a visitation standpoint, in our urban centers and in many destinations along the Front Range, group, convention and individual business travel continues to be much below 2019 levels with various company policies regarding travel. Mountain communities now face new struggles with workforce and affordable housing.”

The Pikes Peak region’s hotels got its first reminder of the economic impact a major convention brings with the return of the Space Symposium late last month to The Broadmoor for the first time in nearly 2½ years. While the number of participants was down from the usual 14,000, the Space Foundation estimates about 8,000 attended this year’s event. Next year’s symposium is expected to draw a typical crowd.

Price expects the symposium will kick off a flurry of meetings and conventions during the second half of the year, many of which had been postponed from earlier in the year.

“The symposium was a big test to see if a meeting was held, would people come,” Price said. Meeting planners hope more people will be willing to attend conventions as vaccination rates increase.

“There is not a lot of meeting and event space available in the area until about mid-December because so many meetings have been moved to the second half of the year. That could extend the summer season well into fall.”

The influx of leisure travelers has meant a record summer season for almost every area attraction with some reporting attendance increases of 40% or more, said P.K. McPherson, executive director of the Pikes Peak Country Attractions Association, a trade group for 28 tourist businesses in the region. Visitors began arriving in big numbers in April that continued to grow through much of the summer, she said.

“There was a lot of pent-up demand among visitors. It feels like we got two summers in one — from the people who weren’t able to travel last year and also from those who wanted to go somewhere this year,” McPherson said.

“They also had more money in their pocket, whether it was from not doing anything last year, stimulus checks or a better employment situation, they were here to spend.”

Colorado’s tourism season outpaced other markets in the U.S. thanks the public’s yearning to experience the outdoors, said Andy Neinas, owner of Echo Canyon River Expeditions, a rafting company on the Arkansas River. Neinas runs the largest rafting outfitter in that state on the most popular rafting river in the continental U.S., and confirms that this year he saw more out-of-state customers travel from farther distances than he had in the past.

Like most other employers, Echo Canyon struggled to hire enough workers. Neinas said the company needed 40 more staff members than it operated with this summer.

“The biggest impediment to continued success in tourism in the Pikes Peak region is qualified labor,” Neinas said.

Sales boomed for TAT Enterprises, a network of stores in Manitou Springs, Old Colorado City as well as Garden of the Gods Trading Post, with revenue up 40% from the company’s previous record year in 2019, owner Tim Haas said. He had to gamble that visitors would return in big numbers since a slowdown in merchandise shipments meant he had to make his orders before it was clear that rising vaccination totals would bring a torrent of visitors to the region.

Tom Haggard, owner of The North Pole Santa’s Workshop, a local amusement park near the entrance to the Pikes Peak Highway, said the park also profited from the pandemic’s “pent-up demand” that has continued even with most children around the nation returning to school. As a result, Santa’s Workshop is seeing more visitors now than before the pandemic began in early 2020.

“Unless the bottom drops out with COVID, I expect the fall and holiday season to be bigger and better than it has been,” Haggard said. “People want to get out and do things.”

“Urban cities along the Front Range were hurt the most in 2020, but I think the resorts did well,” Scharf said.

The hotel occupancy in downtown Denver stood at 39.6% in March, according to an STR (Smith Travel Accommodations) report. By July, that jumped to 76%.

The data website AirDNA.co, which tracks occupancy of AirBNB and VRBO short-term rentals, showed Denver’s occupancy at  93% in July, up dramatically from 69% in December. That survey included more than 4,000 properties.

“We really did hit expectations,” he said.

“We knew it would take the business traveler a while to come back, and that certainly was the case with the economy and travel restrictions — the three things holding back the travel industry. But the leisure traveler came through. In June, July and August people were ready to get out. We saw a lot of drive-in and flight traffic.”

Denver International Airport officials predicted 1.1 million to travel through Labor Day weekend. While that’s more than double the 525,000 who passed through airport security checkpoints the same weekend in 2020, it’s below the 1.2 million in 2019. But only by 5%.

“I was amazed just how quickly we were rebounding, but in August we started to feel the underbelly of the delta” variant of COVID-19, Scharf said.

“I think hotels are doing quite a bit to get those small and midsized groups. A lot of groups still require that extra space … The wedding market has been off the charts this year. I’ve heard from a lot of venues that they’ve had an incredible summer with weddings that had been postponed.”

The July-August rebound for downtown Denver included the Major League Baseball All-Star Game and the return of the Outdoor Retailer Show, among other conventions.

“You can see a clear trend of the plateau of activity starting in mid-July through current,” said spokeswoman Britt Diehl via email.

The high point in July was more 258,000 visitors July 4th weekend and the weekend after the All-Star Game. That’s more than double the high point of 110,000 visitors in July 2020. Diehl said the daily average of downtown pedestrians in August will most certainly be lower than July’s 193,000, likely about 172,000.

“Despite 72.2% of American travelers reporting they have received a COVID vaccine, 63.2% have a high degree of concern about personally contracting the coronavirus right now,” according to Destination Analysts, an independent research firm.

“Hopefully post-Labor Day we begin to see more weekday office employment as well as meetings and conventions,” she said. “We speculate the plateau of activity is due to the COVID surge as well as hot/smoky weather.”

Tourism Office’s Wolfe said they didn’t advertise during the pandemic but ramped up around Memorial Day.

“At the governor’s (Jared Polis) go-ahead, we began actively promoting the state again around Memorial Day, about six weeks later than we typically start our summer campaign,” Wolfe said.

“During the pandemic, the CTO launched the “Do Colorado Right” campaign which shared safe travel tips and encouraged positive traveler behavior, both in-state and out. The campaign has continued this summer with messaging focused on mitigating overcrowding in the parks, addressing proper disposal of trash on the trail and promoting the hiring of local guides to experience Colorado’s backcountry.”