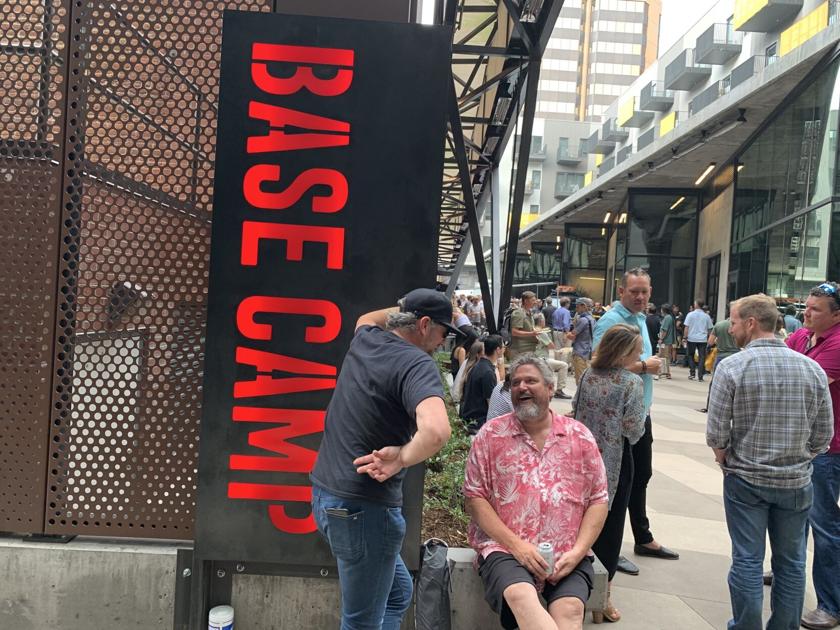 The dictionary defines a base camp as “An encampment used temporarily for storing supplies and preparing for a larger activity, such as mountain climbing or hunting.”

Downtown Denver Market Station developers Continuum define it as a way to activate 15,000 square feet of outdoor space running through the middle of the four-building development where RTD’s 16th Street Mall station used to be, bring in outdoor activity equipment retailers and prepare for the larger activity of showcasing an industry critical to Denver and Colorado’s economy.

“We’ve been working on this for the better part of two years. We wanted to create a project celebrating the outdoor recreation industry and what it means to Denver,” said Peter Fair, Continuum partner, at the Industry Night event Tuesday for the Outdoor Retailer Summer Show.

Market Station just delivered in Q1. The mixed-use project occupies almost a city block, bordered by Market and Blake streets, between 16th and 17th streets. It’s got a 10-story building with 90,000 square feet of Class A office space, 225 “luxury” apartments and plenty of ground-floor retail space.

Thule’s Chirs Ritchie, director of marketing, said the store’s been open two months and has been very well received.

“This is a perfect way to get a little attention,” Ritchie said of the Industry Night event. “So many folks from the industry are here. … and Denver is an outdoors city.”

And Fair said more are on the way.

“Denver is a leader with these brands and companies like VF Corp. here,” Fair said. “Given the location here and strong industry presence, it’s a great place to create a leading outdoor retail hub.”

Plans include educational programs, product demonstrations and outdoor-themed activities for the alley space between the buildings.

“We’re going after unique brands in the industry, and family-oriented programming,” Fair said.